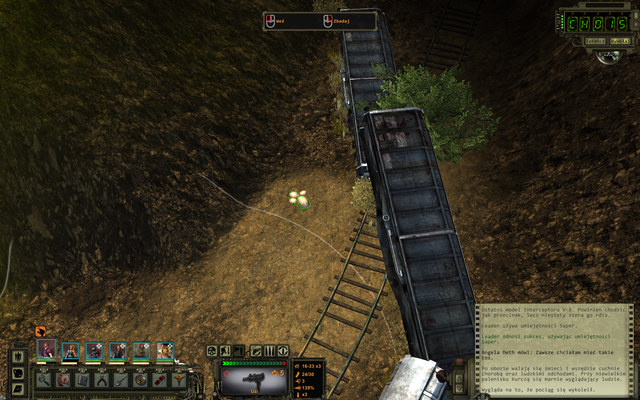 Mushrooms at the car

The dealer in the railway car, in the Eastern part of the map, wants radioactive mushrooms. You can find them at the North-Eastern end of the map. You receive nothing in return, but you will be able to buy the drug that the dealer is preparing. After the transaction, you can tell on him to Kekkahbah, or kill him and tell the chief about this (you can do that earlier also, but some more money will do)

Tell Kekkahbah about the explosion victim

After you enter the Camp, you will see an Indian lying on the ground, who fell victim to a bomb trap. You can help him, if you have the Surgeon skill. Tell Kekkahbah about him.

In no-man-s-land, you find Holliday's supplies. You will get a discount if you return it to him.

Quarex at the arcade wants you to find the CD-i console. You can buy it from Honest Jon - an antics dealer (the other consoles) at the Atchisonians's camp. For bringing the CD-i, you will be rewarded with 100$, but you can also take the console to Mercaptain at the Citadel, for which you will be able to pick one more item in the requisition. Of course, Querex is not going to like the latter solution - he accepts the console but you will not be rewarded.

Get rid of the Rail Thieves for Kekkahbah / James

Kill all members of the four Rail Thieves groups, in the Atchisonians's camp. They are not too much of a challenge. Watch out for the mines buried along the path to their HQ and for the alarms in their lockers. 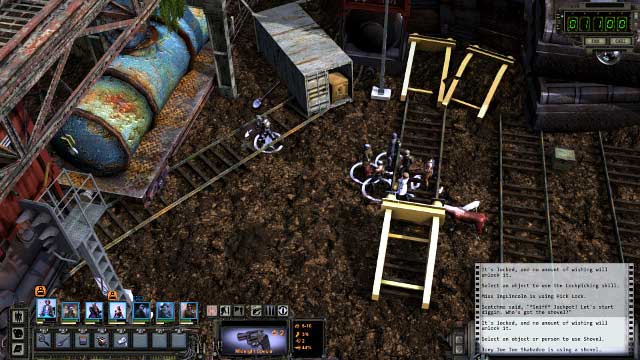 Dig up the supplies

Scotchmo will comment on whether he can smell his booze, depending on where you are. Liquor is buried close to Holliday's shop but, to get to it, you need to walk around, across the junkies' town. To dig up the squeezins, you need to use the Shovel. You can find the shovel at the cemetery, in front of the Ranger Citadel (you started the game there) or in front of the Level L'Upe Mine (number 3 on the world map). 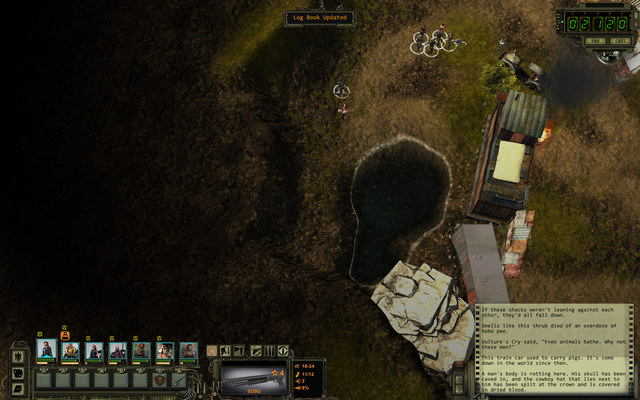 The corpse at the pond

At the Hobo district, you find a corpse and the gear of the Hell Razor. pick up the star and the journal, and take them to Vargas at the Ranger Citadel. Vargas will task you with going to Darwin and finding out what is going on there. In Darwin you will find a colony of the infected mutants. Once you heal them, they will ask you to keep their existence a secret (they will attack you if you refuse). To end this quest, return to Vargas and tell him what is going on in Darwin (the truth or lie - if Vipula from Darwin is on the party, she will leave if you walk back on your promise. 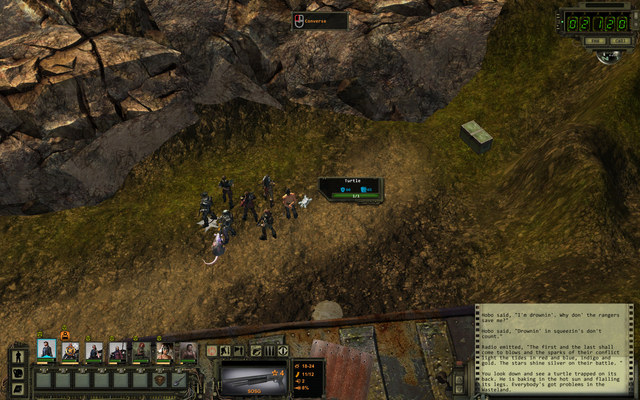 A turtle upside down

In the Northern end of the map, past the Hobo settlement, there is a small turtle lying on its carapace, which definitely needs your help. Use the skill of Animal Whisperer to help him. Then, he will go its own way. However, you do not know that it wants to return the favor. At its pace, the entire way takes, about, 20 minutes so, complete the other quests, in the meantime. Then go to the South, close to the waterfall. 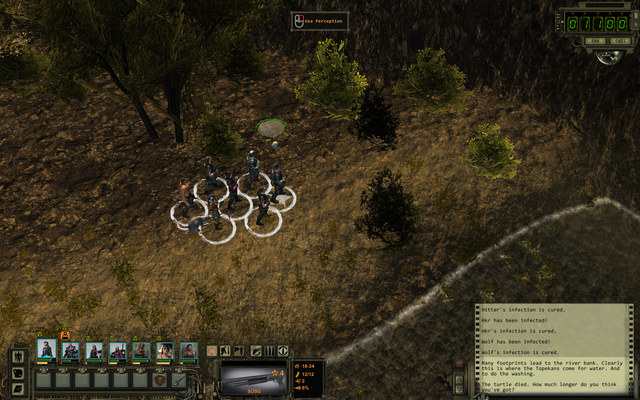 On the left, close to the tree, you will note an empty shell and a small earth mound, which you need to dig out with the shovel. You will find there quite a few valuable random items.