Highpool has been attacked by the Wreckers, led by the Jackhammer. Head deeper into the area. Along your path, you will have to fight the Wreckers on a regular basis. Take advantage of all of the covers around and side alleys. Also, it is a good idea to climb onto the rooftops, for greater range. 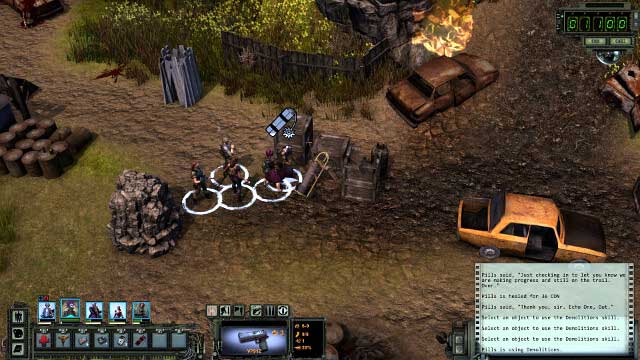 "Fixing" of the mortar

Right before you start climbing towards the dam and the Radio Tower, you will run into the mortar firing at the city. A shot at the mortar, from afar, blows the gun up and kills all of the enemies around it. Also, you can kill them in a more traditional way, and change the trajectory of the shell, later on, by using the Demolition man on the mortar. You will then fire directly at the Wreckers. Do not fire if you do not change the trajectory, because you will then hit the city.

Soon, you will reach a location, where you see a fight between several citizens and the gangers. Try to kill the enemies, as quickly as possible, to save the locals, for which they will be thankful. At the top level, Jackhammer are getting prepared to blow up the dam. Focus your attention on Jackhammer, because she may become really troublesome, if left alive for too long. The opponent is not too strong, but she is fast and she can attack several times per turn. Additionally, she often changes her targets, blocks the line of fire or the passage. In herself, she is not capable of harming you in any substantial way, but it would be a better idea to drag her away from other targets, such as gunmen. Apart from that, she has a lot of health points, so even if you focus on her only, you are going to need, at least, several turns to kill her. Killing all of the gangers will lower a crane that will take the entire party to the town.

At the same time, the crane is the Radio Tower that you need to mount the Repeater Unit onto, as of now, there is no power supply to the tower. Go into the underground of Highpool to restore power. Due to the system overload, moving around may be difficult. A maximum of three gates may be opened, at the same time. The power switch for the Radio Tower is in room 6. Using the consoles close to the entrance, open gates 2, 3, and 6 and you will gain access to the switch (in the basic version of the game. In Director's Cut you can go there straight away). Along your path, you will have to eliminate some bugs but this is not a problem. After you restore power, return upstairs and mount the Repeater Unit on to the tower. Then, contact Vargas and head towards the Ag center.