Control console  In one moment you can have open only three gates. One team member have to close and open next gates, to make possible traveling between rooms. Find four pumps and twist off valves, to lower the pressure.
After you'll twist off all four valves, use also neat main pump.

Power generator  Turn it on, to active radio tower in town, and after that mount there a Repeater Unit.

Emergency valve  Use it on pump nr 10

Toaster  Toaster at the end of a tunnel.

Pile of rubbish  You can't go through there, you have to use second entrace from outside.

2 Chests and safe  Objects are armed with traps.

2 Sejfy  THe first with electronic lock, second with mechanical lock. 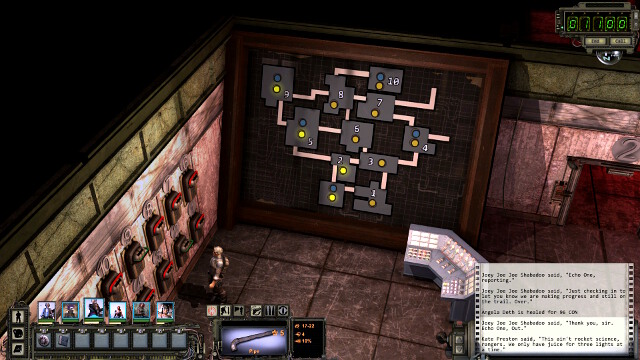 Your main quest here is to open four valves to decrease the dangerously high pressure. It is difficult to move around the tunnels, due to power shortages, which will disallow you from opening more than three gates, at a time. The map of the underground and the system of opening of the individual gates can be found right at the beginning of the location. The blue lights are the locations of the pumps, where the yellow ones signify the opened gates (e.g. in the example on the screenshot, you can access rooms 2, 5 and 9). Use the buttons to unlock the individual rooms and move deeper into the location. It is best to leave one of the characters at the panel and have them open the gates, whereas the rest is exploring the tunnels.

The above piece of advice is true for the basic version of the game. When it comes to the Director's Cut, all of the hatch may be opened at the same time. You do no need to leave anybody in the room with the map, and clear the entire area with the entire group.

In the tunnels, there are lots of mutated bugs with strong armor but, this should not be a challenge to you. Once you open all of the main valves, open the main valve also, close to the control panel. Then, all of the rooms will be opened.

The most important objective for the visit in the underground - the power switch for the Radio Tower is in room 6. Also, remember to restore power before you leave!