Crane and the radio tower  While liberating Highpool you'll find a leader of Wrecking Crew, Jackhammer, which should be your main target. You can use even bombs or rockets if you have any. After killing all of those guys city will be free.
It is also place, where you can get into main city. All of your team members should get into crane's platform and after that use button nex to platform to lift this platform up. If some of your guys won't get to platform - they will be waiting lower.
After repairing an irrigation system in the Highpool Underground don't forget to mount on radio tower reeater units from main quest.

Descent to undegrdoung  There you must go, to solve the problem with irrigation system in Highpool and rescue it from destruction, also to restore power to radio tower.

Vulture's Cry (NPC)  Vulture's Cry is holded in the cage guarded with a group of teenagers. You can give them a pack of cigarettes to drive them off (you can buy it in local store) or slingshot and marbles (slingshot you'll find searching dead body next to destroyed building near entrace into area; mables anywhere in the game world as a junk), or just kill them. After you open a cage, she'll join your team (ATTENTION! - talk to het before you free her, otherwise she'll thank to you and run away). Cage you'll open using skill or using key from Sean Bergin (or Kate if she wins a elections) standing nex to elevator into city, but onl if you've proper dialogue options (Smart Ass and Hard Ass).
With Hard Ass skill you can recover girl's equipment from Harold in local shop.

Shop / Hospital  Here Harold is running shop. He sells a cigarets, which you can give to children around the Vulture's Cry's cage, he also has her equipment (you need to use Hard Ass skill) and you'll get some informations about someone at Rail Nomads Camp, who can know something abou Ace's death.
In the second part of a house local doctor is trying to help wounded from the fight citizens. With Surgery skill you can heal those patients - it will help you to get more popular in the city.

Adam Doochin  He wants you to find his dog - Ha-hau. You'll find him near cemetery. From Adam you get a favourite dog's toy. Use it on the dog and he will be following you. Now you can bring it to his owner.

Damaged pump / Burning house  House of one of citizen is on fire. Nearby in the grass you can see a valve. Mount it to the pump. But it's not over yet, because valve is damaged. To put down the fire talk to house owner and convince him to repair the pump, or do iit on your own if you have enough skill.

Alexey Chuklin  Alexey's searching for his soul mate. You'll find "it" at the center of Highpool (dog Laddie). When you bring to Alexey a stone from the dog, you'll be able to buy from him medicaments and some trinkets improving you skills.

Soul mate of Alexey  "Talk" to Laddie the dog, to get a gift to Alexey.

Jessie-Belle's House  Dowery of poor Jess is in danger - Wrecking Crew members are trying to steal it. You can drive them away with some words (requires Hard Ass skill (4)), with your fist or just let them rob Jess. It doesn't matter what you choose - in safe thers nothing valuable, only sheet of paper, where is written, that father of Jess loose her dowry in cards. After reading it tell Jess the truth, and she ask you to help her get her precious back. You'll find it in the tunnel in the north of the town.

Descent into tunnel / Shrine  Entrace is the old back entrace into Highpool's irrigation system. You can see there effects of battle betweeen robots and Red Scrpions. Also there's a safe with Jess-Belle' dowry (a gun).
Nex to entrace you can see a shrine, which will give every of your team character +1 skill point.

Water  Here you can fill your canteen.

Dead body with slingshot  Rannsack corpse, to find sligshot, which you can give to children at imprisoned Vulture's Cry, to get them from cage.

Tunnel out of city  If Kate Preston win election and become mayor, you'll get access into tunnel from city to place of escaping area.

Cemetery  Place of burial young Bobby and his dog Rex, which died from the hands of Rangers in the first Wasteland. If you want to dig up graves - you can safely do it three times (but not the mayors grave!)

Battle of citizens with Wrecking Crew  In this place main battle is ongoing between citizens and Wrecking Crew members. When you'll be helping be careful to not to harm any Highpool fellows. Try not to use area-atack.

Mortar  You can destroy it, and enemies around at the same time. Better choice is to use on mortar Demolition skill, to correct shooting line and blow up some of Wrecking Crew. Do not shoot unless you correct trajectory, because you'll hit a citizens of Highpool!

Trader  Wormy Jim offers a discount, if you get rid off invaders.

Safe and rubbish  Safe locked with electronic lock, nearby pile of rubbish and further next to plan second, contains a trap.

Safes  Safes and chests, to entrance is mounted a trap.

Toaster  In Jessie-Belle's house there are two chests, safe and toaster with contact lenses.

Highpool is under attack from the Wreckers and it resembles a frontline, rather than a calm city. You will have to cut through the waves of gang members, systematically, deeper into the location, up until you reach the dam. In the city, there are many fences and weak walls, which you can destroy to find shortcuts and sneak up to the opponent. In combat, it is also a good idea to use the surroundings. For example, soon after the start, you reach a mortar that bombards the town. If you have an expert in explosives, you can use the Demolition Man skill on it, to alter the trajectory and fire at the Wreckers. You can also fire at the mortar from afar, which will blow it up and kill the nearby enemies. The city also abounds in traps so, it is a good idea to keep your perception and the defusing party member ready. 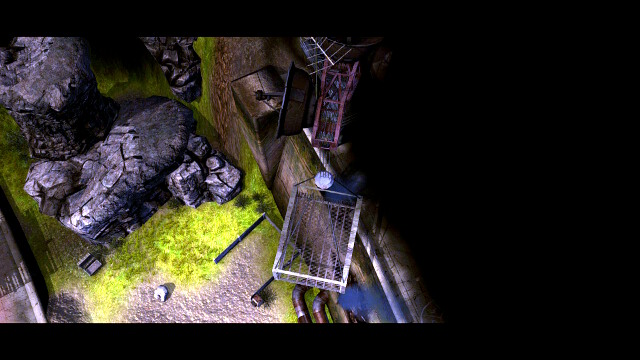 You access the main part of the city on the crane

The attacking gang turns out not to be the only problem. The Irrigation system has been destroyed and, only after you go down to the underground part and fix it, the city will be completely safe. Only then will you be able to mount the Repeater Unit. To learn more, see the next chapter.

After you have dealt with both issues (the Wreckers and the irrigation system) Highpool will be safe again. The townsmen will then have to elect a new mayor. If you complete side quests and help the men (e.g. you go to destroy the Wreckers' base once and for all), Kate Preston will win the elections the town will be back under the Desert Rangers' jurisdiction. If you are lame at helping them, or you ignore helping them at all, the town will be seized by the Red Skorpions. In the city center, there also is shopkeeper Harold (he does not want to trade with you, if you fix the pump at that room), and a medic dr. Scott Warner, who heals your entire party for free, if you need it (he stops if you attempt to rob his locker).