Inside the Citadel, you can find Robert Bowling, who offers hand-made weapons for sale. Although the statistics and the prices seem tantalizing, their actual combat value nears zero, due to constant jamming. You can tell on Bowling to captain Mercaptain, who throws him into Prison. You can then visit him there, and he will ask you to take a letter to his sister Kathy at the Rail Nomad Camp. If you do not tell on Bowling, you can attain from him the information on why he needs the money that he gets from selling the faulty weapons, if you use the correct dialogue options. He will then give you the letter to his sister. If you keep bringing up the issue, you can convince him to leave his practice and return to Kathy (you will not need then to take the letter to her). 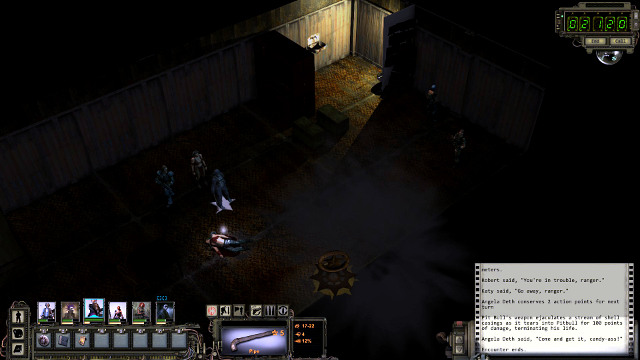 Deploy your party before the fight with Pitbull

At the Rail Nomad Camp, go to Kathy. Depending on what happened earlier, she will be there by herself, or with Robert. You will learn that Kathy has been enslaved by PitBull of the Red Skorpions, who is soon to come for her. When he comes, you will have three options to choose from. You can buy Kathy for 500$, let him take her away, or (if Robert is there, you will have to fight him) or kill PitBull. The fight with Pitbull may be problematic, due to the grenades that he is using. You are in a narrow railway car so, there is not much room to hide. Additionally, a grenade may easily kill Kathy and/or Robert (not mentioning the party members), and you will not get to see the happy ending. The best thing to do is, before you start your conversations with Kathy, to spread your party around the corners of the car and leave one character in the middle, preferably one with the highest Initiative. Start the dialogue as that character. Then, you will not be clustered together and you will not be all killed with one grenade. Retreat from the center, quickly, as the character that started the conversation. Kathy and Robert should then be outside of the blast radius of the grenades. Try to kill PitBull as quickly as possible and do not hesitate to use automatic modes of weapons, nor explosives (just make sure that you do not wound either Kathy or Roberta).

What happens to Pitbull has an influence on the events at the Prison. The majority of locals will be happy to see him dead and they will free the rest of the slaves. At the same time, you will anger the rest of the Red Skorpions, who will be seeking revenge.