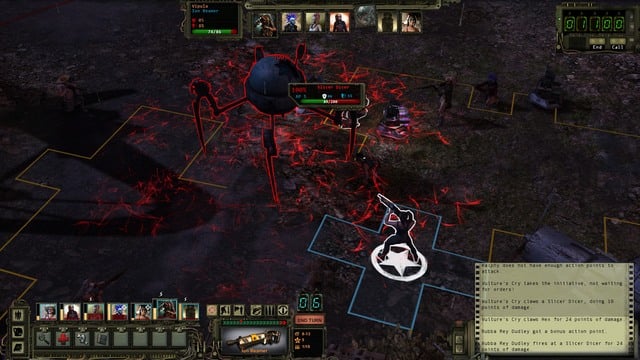 Match the weapon with the opponent.

The basic thing that you need, in order to survive in the wastes, is common sense, when it comes to managing your resources. You can launch yourself, guns blazing, straight at the opponents and fire all the best that you have. Most probably you will quickly win such a fight. Most probably, you will also win the next one. And another. But then, you will quickly realize that you have run out of first-aid kits and there only are three bullets left in your clip, and trigger happiness yields the way to annoyance. Each billet is sacred, especially at the beginning of the game. This concerns both the relatively cheap and common 9mm bullets for handguns, as well as, especially ammo for automatic weapons and sniper rifles. This is why, it is important that you are accompanied by versatile and diverse party. First of all, to be prepared for various events and secondly, to prevent using up each other's ammo.

In Wasteland 2 range is the king. Who has good range and can use it properly (i.e. use the weapon well), is at a gigantic advantage. If you have a weapon modifier that increases range, do not hesitate to mount it onto the weapon, as the character with the Weaponsmithing skill. The majority of fights will be started by you and tell your characters to fire at the opponents at the edges of the map. The greater the range the more the opponents will have to walk to be able to respond with fire in the first place, while you are shooting at them.

Use Ambush to take cover, crouch if you need a higher chance of hitting the target. The sniper and two characters with assault rifles are excellent here. The sniper with a good weapon is capable of killing an enemy with one, well -aimed shot, in this mode. Also remember to keep your AP for the next turn. Your character can keep up to 2 AP, even if you end your move with 10 spare points. not approach the opponents, to prevent getting within their range End the turn and they will come to you, which will give you two shots, thanks to the AP that you have saved. What about the ones that manage to approach too close? This is where characters with hand weapons come into action, e.g. the medic with a well-developed Handguns skill. Critical damage from handguns, in spite what may be apparent, can be really high and, additionally, it can be fired three times per turn. Never ignore melee weapons. It is perfect for musclemen as an alternative weapon and not necessarily does it deal less damage than an automatic weapon. Before you hit someone, however, try to stand on the side of the target, to prevent getting into the line of fire of the rest of your characters, and fratricidal fire.

What if the opponent does not approach? They hid behind a good cover and awaits you in the ambush mode? Send in one, preferably the toughest, character with the rest of the party waiting in their positions with ambush mode on. Once your character appears near the hidden opponent, he will, most probably, want to change positions and will start searching for a new cover. Most probably, he will then walk into the open and, he may even start running, directly, towards the rest of the party. He will then become an easy target - the reactions of the party will finish him out, as soon as he gets within range. Stationary turrets are a bit more tricky. Their range is long and they will have no problems turning a Ranger with low CON into minced meat. The best way to eliminate them is by using the sniper. Have him hide as far as possible and behind the best cover possible, while the rest are waiting outside of the turret's range. If you have explosive weapons (rockets, grenades) it is an ideal moment to find out what it can do.

What do you do, however, if the opponent refuses to come out from behind the cover and you do not have a good bait at hand? You can deal with the barricade using explosives, or a heavy gun. Even the toughest of walls will give in to a grenade and wooden crates are nearly sure to fall apart thanks to a machine weapon. However, you need to be careful and make sure that you do not destroy your cover at the same time. For example, if you and the opponent are hiding behind both sides of the came cover, restrict firing a heavy gun at it. Of course, you kill your opponent this way, but you deprive your party of a cover. It is best to take the position at the side of the opponent, so your projectiles do not hit the cover.

Also, you need to watch out for the characters that fire from behind a cover and they have a low chance of hitting the opponent. It may happen that they hit not the opponent, but the cover. In the case of pistols and walls this is not a problem, but a character packing a heavy weapon and hiding behind wooden crates, may destroy them by accident and expose himself to the enemy attack. For this reason, it is better to perform a selection of covers and do not hide characters behind ones that they can destroy. 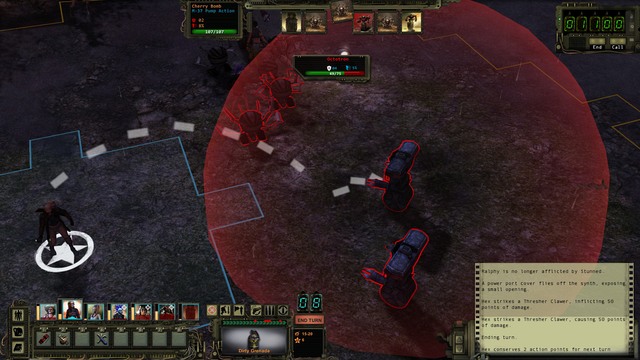 Also, it is well to know what the opponents can do and match your strategy with them. For example - the big mutated frogs can stick put their tongues and rip off the weapon from your hands so, as far as this is possible, you need to keep them at a bay. The case is similar when it comes to some robots that can push a Ranger away and lower his statistics, at the same time. Some of the opponents explode after they are killed (e.g. at the Ag Center). An ideal situation is one, in which there is nobody nearby, at the moment of explosion, but there are many opponents, who take damage from the blast.

It is also worth knowing about the habits of various opponents. Animals usually move around in packs, have lots of action points, try to dash in between party members and they fight at close quarters. While dashing towards the party, they can be easily targeted with grenades and machine guns, but you need to attach more care to eliminating them, after they approach their target. People with firearms hide behind covers, which forces you to flank them or use grenades. Often, they will also be protected by opponents with melee weapons who stand in the line of fire between you and the opponent with a firearm. Machines have strong armor and high firepower, so frontal attack may end in quick elimination of your party, but when they are standing far away from the party, they will be wasting their AP on attempts to cut the distance shorter. There are not too many opponent types in the game, so you will figure it out quite quickly, how to deal with each type.

Match the character to the target. Remember, every bullet counts so, use it as effectively as possible. Is there someone with 15 CON left, around, and a it's the turn of a character with an assault rifle, who will probably deal around 30 damage? Have them fire at a different target with higher health and have someone with a handgun deal with the opponent with 15 CON. Also, pay attention to the opponent's armor and the penetration value of your active weapon. Of course, the opponents packing the most deadly tools are your priority but, use grenades and AoE attacks only if you really have no other choice, or if the enemies are clustered together.

While moving around the battlefield, you should be precise about the destination point. You should be especially careful with your AP. The Interface tends to be malicious this way and it is possible that you end up in the spot next to the one that you had planned to reach. Or that you run out of your AP, after you get to that spot, and you cannot take a shot, as a result. Combat is turn-based and animations can be sped up, to save time, therefore take your time. Also, watch out for keyboard hotkeys. They are useful, but it is easy to confuse them and instead of reloading the gun, you end up ending your turn, which the game does without giving you a warning.

You also need to pay attention to the positioning of your party members before the battle. This is especially important for calculating the succession of turn-taking. If the passage is narrow, and character with low initiative stand in front, an entire turn will go by, before the characters in the second line can make a move. Therefore, try to move around in the way that at the beginning of the fight, leaves at least a single field gap between characters. Apart from that, it is also important because of the opponents and your party members. The AI may try shooting at opponents over the heads of party members, and often deal damage to your men, as a result. The AI may also block the passage, even if it is your ally that it is controlling. Without extra space for maneuvering, it is easy to bring about a congestion and, as a result, to waste AP on long displacement.

Finally, it should also be mentioned that you can open your inventory and transfer items between characters for free. If a character runs out of ammo you can give them the ammo from someone else. This also works on the unconscious party members. If the medic has passed out, and only he has trauma kits, you can easily access his inventory and carry it over into the inventory of another character with the Surgeon skill. Remember that the characters that exchange equipment need to stand next to each other.