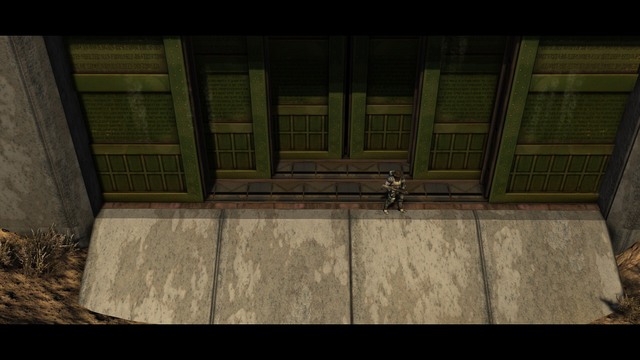 The entrance to the Ranger Citadel.

A pre-war vault cut in the slope of a mountain. Earlier, it was occupied by the cult of the Guardians of the Old Order - guardians of pre-war technology, but the Rangers killed them out and seizes the building, during the events of Wasteland, and adapted it to the needs of their HQ.

You gain access to the Citadel after you complete the first major quest (saving Highpool or Ag Center). From now on, you will be returning here in the key moments of the game. In the Citadel, there are, among others, General Vargas, the NPCs that you discarded from your group and a number of well-supplied merchants (many of them pay much better, for the individual items, that anybody else in the wastes - you can find details in your log book). You can also find Robert Bowling here, who sells cheap custom weapons, which you should stay away from, because it jams with nearly every shot. During your visits to the Citadel, remember to replenish your water supplies in the kitchen. You can also visit the local museum that tells the story of the game world.

Botanic gardens whose function is to supply all of the areas, under the jurisdiction of the Desert Rangers with food. Not only is it a farm, but also a research facility, where dr. Kathy Lawson works on increasing crops.

Shortly after you start the game, you will have to make a choice between saving the Ag Center and Highpool. The location that you do not render help tom is destroyed (alternatively, where you take no action, they both are), and all that inhabit the location die, which will be reflected by the course of the game afterwards.

Before the war, it was a water reservoir and water treatment plant. Now it is a town, which along with the Ag Center, plays a vital role in survival of the locals- Highpool pumps radiation-free water that later on is supplied to the locals.

Shortly after you start the game, you will have to make a choice between saving the Ag Center and Highpool. The location that you do not render help tom is destroyed (alternatively, where you take no action, they both are), and all that inhabit the location die, which will be reflected by the course of the game afterwards.

The railway men are Indians who use old freight trains to move around. Their camp is a pre-war depot. Around, you can also find many drug addicts and homeless. The nomads themselves are deep in civil war between the individual tribes. The Topekans control the last railway engine, which could still function, but it is the Topekans that have the brake shoe that the machinery requires to be fixed. The Rail Nomad Camp is the only hope for railway to return to Arizona, but you first need to end the war, in some way, and clear the area of raiders.

The state prison before the war and, after that, the HQ for the Desert Rangers, who then left it, in favor of the Citadel. The prison was then seized by the former gang (Red Scorpions), who now claim to be a better alternative for the Rangers. They rule the nearby areas with iron fist and exploit the locals.

The only passage to the areas to the far East goes through the canyon. It is being controlled by the M.A.D. Monks, members of the cult that praises a nuclear warhead. In the canyon, there also is the Diamondback Militia, which tries to wipe out the monks. You will have to take one of the sides... or against both.

Prior to the war, an army airbase. Now one of the largest towns, where human civilization was preserved. Nearly completely wiped out by an unexpected robot attack.

Right before the war, a town near Los Angeles. It is here that the first unit, dispatched by Vargas, builds the early Ranger base, due to the nearby water springs and water treatment systems. The status of this unit remains unknown at the moment at which you reach here.

Santa Fe performs the function of the Citadel in California. You can replenish your water supplies here and contact the facility in Arizona.

Prior to the war, a collection of metal sculptures made by an Italian worker Sabato Rodia. As of now, there is a town built around the sculptures, named Rodia, after the artist. Here, among others, you can find a clinic and a bank. Unfortunately, the town needs to deal with Leather Jerks gang that plans to seize the city.

The famous stadium built in 1923 to commemorate the veterans of World War I, where the local American football team, USC Trojans, used to play. As of now, it is the HQ for the group called Mannerites. As the name suggests, their manners are impeccable and this is at the base of good manners that they wish to rebuild human civilization. Traditionally, there needs to be a faction that opposes them and these are the Robbinsons.

Prior to the war, it was a tourist attraction and now, the HQ for the "Real Americans" - a faction of Gippers, which praises Ronald Reagan as the mythical, pre-war hero. They produce methane, which they then shop all over Los Angeles.

A communal park next to Hollywood, prior to the war. Currently, the observatory is the HQ for the Salvation Church and its members, the Handgun Packin' Priests. It is an extreme radical group of Christians that wants to complete the work of nuclear warheads ad clear the world of all sinners. In the first place, they want to take on the ones at the Hollywood Chamber of Commerce, who are based in the ruins of the former Hollywood.

An abandoned military base in Seal Beach, which has been turned into the HQ for the cult that wishes to turn all the humans into half-robots. It is here that Mathias "converts" people and recruits his loyal, semi-organic army.