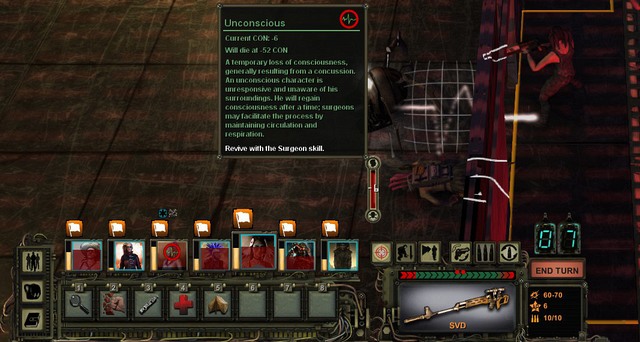 Having 0 CON doesn't yet mean that you die, but you loose consciousness instead. A stopwatch appears above the unconscious character, as can be seen in the picture. When CON falls to a critical value, the character will die. In Wasteland 2, you can go to a temple and resurrect a dead companion. Dead NPCs will become food for mutant vultures in the desert. Remember however that you control a team, not a single hero, so when one person dies, you can play along. The game is over only when all four main characters die.

To avoid the demise, you need to use the Surgeon skill on the dead character, as soon as possible. To learn details, roll the mouse over the character's icon. You will learn how fast they lose their CON and in how many turns (during combat) or seconds (outside combat) the character dies. To perform a surgery, you need the trauma kit, which can be bought at any shop with medicine. The higher the quality of the kit, them more points it restores to the character. It is necessary that, at least, one character in the party has the Surgeon skill at a high level. It is useful a skill, not only for rescuing party members, but also the other NPCs in the wastes. A good idea is to develop this skill in two characters, because you cannot operate on yourself. The other character will do with 1-2 points, whereas you should strive to reach the maximum in the case of the other. You can operate, e.g. on bleeding, but also this requires appropriate equipment. The process of bringing back to good health requires time so, if you are in the middle of a fight, even the character that is being patched up on a regular basis is constantly exposed to damage which may prove fatal. If you have waited for too long, it may turn out that the surgery was started too late and it does not end before CON drops too low.

The unconscious character does not need to be lost, however. Each loss of consciousness is connected with an effect being imposed. It is a good idea to learn about it. Usually, CON points are lost with each turn. If the character does not have any negative status (e.g. bleeding) their CON will return to the level above 0 automatically. The downside of this solution is that they will only have 1 health point so, any scratch brings them down to the ground again. However, you save up the trauma kit this way and, if in combat, the AP, which the medic would have used to perform the surgery. You should also check the experience level of the character, because it may prove unnecessary to heal them. They may be up for the next level in a moment. They will then be healed automatically, in which way you save up not only on the trauma kit, but also on the first aid kit.

Remember the doctor first needs to reach his patient so, he may not have enough AP to do that in the same turn, and start the surgery. The important thing is that the freshly "patched up" character will not be ready to fight immediately. For some time, they will still have a negative status on them which decreases attributes.