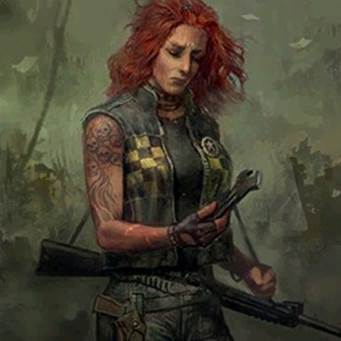 Angela is a vet from the first installment of the game. For that reason, her starting level is high (14) and she is a powerful reinforcement for the party. You can enlist her around the Citadel, literally right after the game starts. She uses an assault rifle and she can pack a punch with her unique wrench. She does not tolerate killing - apart from the Indians from the Rail Nomad Camp, who she is reluctant towards.

Angela does not stay in the party for long. She leaves along your way to Damonta, which does not take place too early. 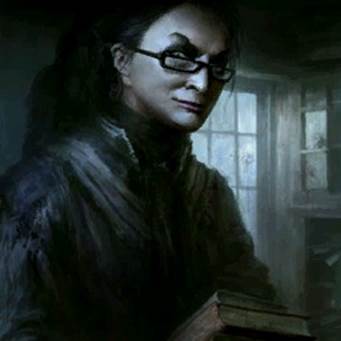 A physician from Ag Center.

You will find her in the Ag Center after you decide to save it (otherwise Rose will die). She has a rather dark past - in Wasteland, she was a member of the Guardians and worked with Doctor Finster, which is reflected in her frequent interactions with people from various locations. The only character in the game with 10 points of Intelligence, which gives her 5 survival points witch each promotion! Moreover, she can join your team after about an hour of playing, which allows you to train her in anything you want. Unfortunately, she's not that good in battle, due to her low Strength, and this attribute should be developed first. She carries an unique pistol with AoE damage, but despite the uniqueness, it's a rather weak weapon. A good alternative is to train her in using energy weapons. Then, she can use her pistol for usual enemies and energy guns for armored opponents. Rose will also frown upon actions not proper for a Guardian. She won't shoot at neutral NPCs and will leave if you hurt too many civilians. 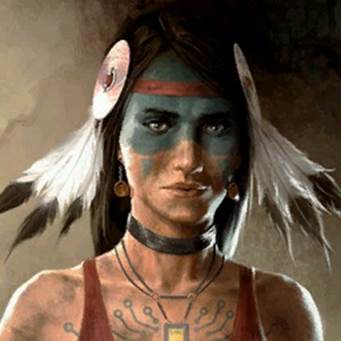 Cry has close ties with nature.

You will find her in Highpool, if you decide to save it. She is locked in a cage guarded by a group of kids. To get rid of them, you have to buy them a packet of cigarettes in a nearby shop or give them a slingshot to play with. Generally, it's a decent person, but not as righteous as her alternative - Rose, from the Ag Center. High Intelligence, a lot of scout skills. She makes a rather poor choice if you're looking for a sniper, due to her low Awareness and small number of AP, but if you don't have anyone on this position in your team, she will manage. Cry is closely connected to nature - she won't fire at animals and will leave the team if you hurt too many of them. 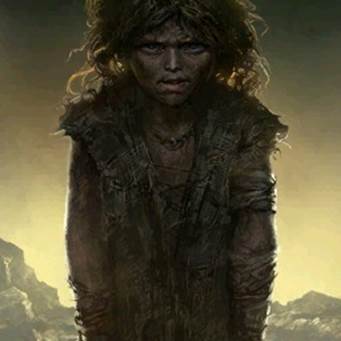 Ralphy is another Indian.

Ralphy can be found in the Rail Nomad Camp. First, you have to save him from drowning (use Brute Force skill to knock down the smaller totem or dig it up with a shovel) and then, visit his mother's house so that he can join your team. His statistics are quite peculiar and the choice of skills is rather strange. Only 7 AP points, which limits him during battles, and 3 points of Intelligence, which gives him only 2 survival points per level. Intelligence and AP are the first things that should be developed if you plan to make use of him. Low Strength is also a disadvantage for a character that is supposed to be a melee fighter, so it is better to train him in using some kind of ranged weapon.

Whether he drowns, or not, will have its effects on the development of the main plot at the Camp. 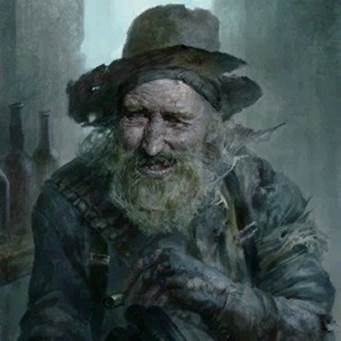 Scotchmo lends color to the game.

Rail Nomad Camp, Homeless District. A former railway worker who started abusing alcohol, after the death of his wife. You only need to talk to him to enlist him. For the donation of 1000 dollars to Wasteland 2, during the collection on Kickstarter, you could appear in the game and Scotchmo is a character that represents one of the sponsors. His attributes are painstakingly low. So is his intelligence, which heavily limits the development of this character. Also, he is weak in combat (although, if he gets lucky, he can lacerate someone with his knife). Still, in spite of these statistics that do not sweep of f the feet, it is a good choice to have Scotchmo in the party, due to his looks, general uniqueness and the color that he lends to the game. For example, due to his alcohol addiction, Scotchmo will steal a bottle of alcohol, if a party member happens to have one in the inventory. Often, you will also witness interesting dialogue lines.

If you are a strongly evil character, you can enlist him in the party and go to the cemetery with him, where you will be able to dig his wife up. Still, it is better to keep him alive. For bearing Scotchmo up to L.A., you will be rewarded with a nice surprise. 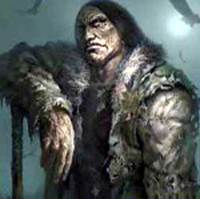 Rail Nomad Camp. The security boss to James, the leader of the Atchisonians and, allegedly a friend to Hell Razor. If you brought about peace between both of the tribes, while you are leaving, he will come asking to be arrested for all the heinous crimes that he perpetrated. He uses assault rifles. He fits well into the party that relies on speed, i.e. one that does not wait for the opponent to approach and gets into action. Very poorly distributed survival points - over as many as 7 areas, where 3 are firearms. 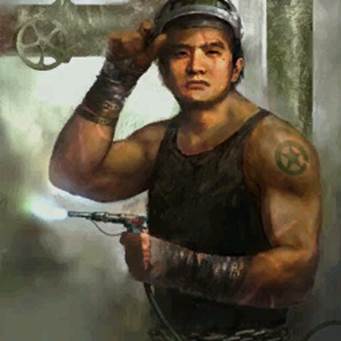 After you save Highpool or Ag Center, as you travel in the South-Western region of the map, you will receive a call for help, over the radio, from Level L'Upe Mine, which has collapsed. One of the buried ones is Takayuki's mother. After the successful rescue, Takayuki will offer you to help you. It is a character that has been designed for melee combat, but due to the low AP and low Speed it is a better character for carrying stuff around on the strong back.

Dan can join your team after you return the nuclear missile to the monks in Temple of Titan, but strictly speaking - you shouldn't take him. He may appear as a peculiar character and his Charisma is very high, but it doesn't change the fact that Dan Q is simply weak. You can add him to your team if you happen to need someone with high Kiss Ass skill or if you want to sell and buy a lot of equipment. If you, for some reason, want to keep Dan Q in your team, he theoretically should get a little stronger after 2 levels, when you will be able to increase his Intelligence to 8.

You can add him to the team in the Temple of Titan, if you disarm the nuclear missile. A former monk that is currently going through a crisis of faith and is searching for a new god that he could worship. Another peculiar and rather mediocre character. He has low Speed, so you cannot really use him for aggressive melee fights. Being on level 20, makes him have to wait as many as 10 levels for the next extra point. Certainly, he's a better choice than Dan Q, but mainly because of the fact that everyone is.

The last NPC from the Temple of Titan. To add him to the team, you have to give the warhead to the militia. Also, you need to have a lot of Charisma. The unnecessary 6 points of Intelligence is a strong shortcoming of Gary, as these points could be distributed into other attributes, making him a better shooter. Generally speaking, a mediocre character, quite vulnerable due to his low Strength. Also, it is doubtful that you won't already have someone with Computer Science and Lockpicking skills on this level.

She will ask you to let her join your team after you cure the mutants in Darwin and promise to keep the secret to yourself. If you tell anybody the truth about her origin, Pizepi will leave. She uses energy weapons, which is very useful against armored enemies in Damonta. Anyway, she's not very powerful and you will probably already have the rest of the skills that she represents in your team. 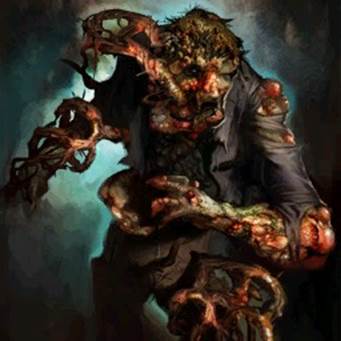 Seehe asks you to join up, as soon as you heal the mutants in Darwin and promise not to tell their secret to the rest of the world She leaves when you tell somebody the truth about her home city. She uses energy weapons, which is useful against armored enemies. High Intelligence - Vipula can be very versatile. In a wider perspective, she is worse with technical issues than Lexicanum, although she should level up faster than him, thanks to decent Charisma. 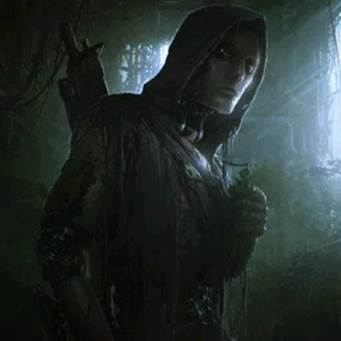 You can add him to your team after completing the main quest in Damonta. What's interesting, it's that he has a built-in dictionary in his brain and a bionic arm for fist fighting. Unfortunately, he is not trained in Brawling. However, the arm gives +2 to that skill, so you don't have to start from zero. It is an average character and you can add him about halfway through the gameplay (at this time, you will probably have developed all the skills that he has). He has an unnecessary 7 points of Intelligence, which gives him only 3 survival points per level - the same number as with 4 Intelligence. Hitting the number of Intelligence that would give him the additional point per level would require advancing as many as ten levels with Lexcanium. Surely, it is an unique character and this is probably his biggest advantage. After some time, he can be changed into a good warrior with quite a lot of universal skills.

A trader, who you will meet in California, quite early. You will be called to Santa Fe, as there is someone who would like to meet with you. After you return to the base, you will able to add Pete to your team. He has some nice statistics that give him 8 AP and 3 survival points per level. Some may think that pistols are no longer of use at this stage of the game, but you will surely find some nice .45 guns that can deal a lot of damage. Having a team member with high Barter skill is also very helpful, because in California, you won't be able to sell items as easily as in the Ranger Citadel..

You will find three NPCs near the entrance to the Ranger Citadel, who you can add to your team if you loose one of your basic four heroes (or if you've created less than four of them). Just like the original characters, they do not interact with the world and they will always follow your orders (there's nor risk of protest). However, you can remove them from the team at any moment and add some usual NPC, which you cannot to with the characters you create. Also, you won't get a reward from Hawco for adding them.

Ertan is a young boy who tries to look like a badass with an obsession of killing. When you collect enough cat litter, you'll meet him near the gate of Santa Fe. If you refuse in the first time, you won't meet him again. Ertan specializes in heavy weapons and wields his own SAW and a melee weapon - Sawsword. He appears rather late in the game, so his only value is being good at fighting - except for Hard Ass (4) he does not have any general or knowledge skills.

You'll meet him in Santa Fe Springs after you gain a good reputation in California, almost at the end of the game. He's still worth your attention because he's got really good attributes and skills: he specializes in SMG, he's got an MP5k and healing skills at a very good level.