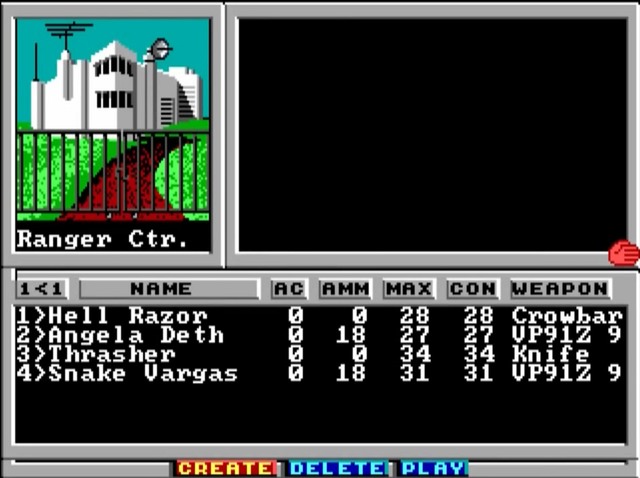 In 2087 a four-person group of Rangers of Wasteland - Hell Razor, Angela Deth, Thrasher, and Snake Vargas - was sent to investigate a series of strange anomalies in the desert. They started to search for clues at Rail Nomad Camp, Ag Center, and Highpool - all the locations are also present in Wasteland 2. Their journey finally took them to Las Vegas, a city rivaling casinos and two crime bosses - Fat Freddy and Faran Brygo (whose name coincidentally is very similar to Brian Fargo). Vegas was almost untouched by the Soviet missiles. Well, probably the casinos put money on that the bullets would miss them, and as it is well known, a casino can never lose. However, the capital city of Nevada is now in big trouble - it is being attacked by an army of robots, which kill everything on their path. During the clashes in the city, the Rangers meet, amongst others, the famous Scorpitron - a robo-scorpion, whom you can admire when you launch Wasteland 2, and who more than once evoked fury in a player dying at his feet.

In search for the source of problems the Rangers descended into the sewers of Vegas, where they assembled a dismantled android called Max, who revealed the location of pre-war military bases - Sleeper 1 and Sleeper 2 - and the town of Darwin. Sleeper 1 & 2 were twin research facilities. The first one was used to research energy weapons, cloning, and biological armors. In the second one a supercomputer programmed by Harrison Edsel was being built. As the work on the machine progressed, Edsel began falling into paranoia. He started dread the creativity and the potential of his creation. The computer, however, was never shut down - both bases were evacuated shortly before the attack.

In the town of Darwin so-called Darwin Project was at works, whose goal was to create a life form that would be able to survive in any conditions. That was top secret research which was conducted as a part of preparations for a possible nuclear conflict. The Rangers visited Darwin, where they faced Dr. Irwin John Finster - a pre-war head of the institution. Finster achieved immortality, by transforming himself into a cyborg, at the cost of humanity. He prepared invented the plague that was able to turn humans into mutants. The residents of Darwin were guinea pigs for him (Darwin and its mutant residents can also be visited in Wasteland 2). Eventually, the Rangers killed Finster, preventing him from spreading the plague. However, the biggest threat still lurked in Base Cochise.

Base Cochise was in fact Sleeper 2. The source of all problems turned out to be Cochise AI - the computer once programmed by Edsel. It revealed to the Rangers that during the exchange of fire one of the rockets directly hit the complex, thus awakening its consciousness. In time it was able to repair the damage resulting from the explosion. Later, it discovered that single creatures survived the war, however, radiation and mutation process led to drastic changes in their genes. Therefore, it decided to wipe clean and then rebuild the world, repopulating it with perfect cyber life. He made contact with the surviving head of Darwin Project - Irwin John Finster. It learned that before the war Finster competed with Andrea Mills, who received a Nobel Prize for her research in the field of cloning. Darwin Project was top secret, so official competition with his rival was out of the question. The embittered doctor was easy to manipulate. The computer persuaded him to transforming into a cyborg, thus gaining complete control over him. At the same time, in Base Cochise it began a mass production of robots that were to eradicate the remnants of life on Earth. The Rangers blew out the compound, thus undermining these plans and saving the civilization of humans. 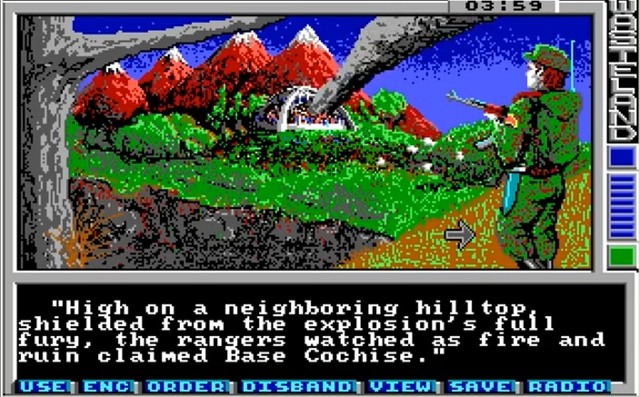 The end of Wasteland.