Some rich mission at last. Skeletons are no match for Skaven, so be careful to not harm yourself and you won't suffer high losses. At the beginning move forward. Soon we will see small path going left from main road. Stop near crossroads and destroy all skeletons you will see. When you're done with it, turn left and move to the valley from the picture below. 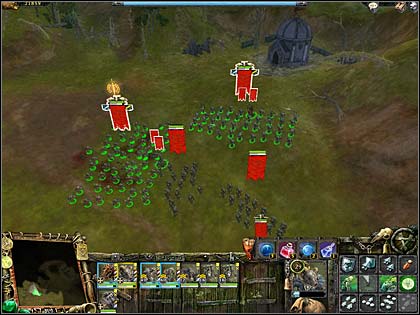 It's the first place when we will find those artefacts from the secondary task. In both cases we will have to destroy one regiment of skeleton archers, one of ordinary skeletons and two banshees. When you gather spoils, come back to the main road, move along it for a while and then turn right, when you see the place from the picture below. 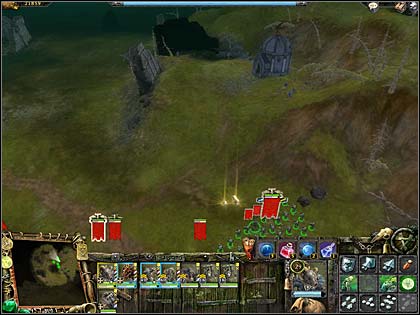 Once again I wasn't fast enough to make a photo of enemies :)

Situation is identical to that described above. When there are no undead troops around move toward upper-left corner of the map. We will have to destroy some more skeletons until we reach a crypt where vampire lord "lives". He is really tough and has a powerful area-of-damage spell, so remember to use Favoured servant. But before you start slaying him, destroy his coffin first, or he will resurrect himself each time you defeat him. When he's only a dust don't gather his drop, but regenerate first. When you're ready, pick up items and mission is done.

Now move forward and you will regain control over Chaos' troops. It's time for another battle.