This time we will make a lot of destruction - we cave to crumble three lighthouses and kill every single Elven soldier we can find. Deploy as usual and move north, you will see first target defended by a hostile group there. Short fight and one third of mission is completed. Now move west until you reach another hill with second lighthouse and some more Elves to kill. Short advice: ships can unload enemy's troops behind you, so be careful and don't let them destroy your cannon. 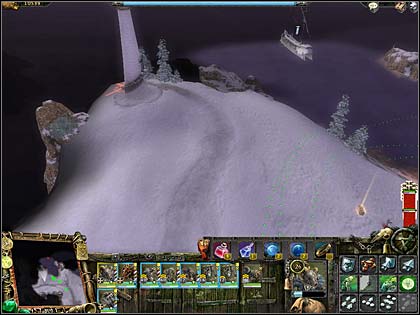 Second lighthouse. You can also see a ship, whose landing party destroyed my cannon

Now it's time to destroy the last target, which can be seen from the hill we stand on. Once again there should be no problem with doing so. As you see this mission is really easy and, if you watch your back and use Favoured servant, can be ended without losses.

After the battle we will command Chaos' troops once again. You can go to a town, regenerate forces and buy whatever you want - at this moment you should have lots of money. Especially invest in seven units you will take to the next mission.