Now we will face the last battle in second act. This time we have to defeat Elven mage, who knows where is the body of our precursor. For this mission you can take whatever you want, I decided on following troops: two regiments of Chaos' warriors and two of knights, one of bloodletters and one wyrdspawn. Deploy as on the picture below, as far to the left as possible. Remember to use Thorgar's ring - it can make a wyrdspawn every five minutes. 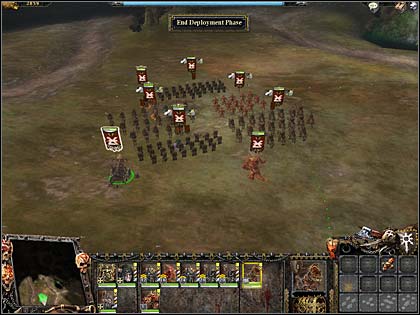 At the beginning a group of Imperial forces with a cannon will appear near the middle of the map. That cannon should be a target for our hellcannon. The rest of our troops should run along the left road. A unit of knights will attack as soon from the northern direction (they should be charged by infantry) and swordsmen from east - they're a target for cavalry, which, after killing them, should strike at the cannon's position.

Meanwhile we will get a secondary task - we have to destroy town buildings. Because of that, after defeating all those hostile groups, it's good to order our artillery to destroy houses. Small advice: two times during this mission I was attacked from behind by archer's regiments: once near rocks between roads at the bottom of the map and once in the middle of the town. So be careful and look at minimap to be sure, no enemy is on your back.

When you reach the town it's good to order infantry to destroy building, while the rest of troops should finish off enemy's remains. But don't go to close a group with Elven mage until you complete secondary task. When you do this, you can easily defeat "army of good". Second act is done.