Despite the title this map doesn't look like a town. Now it's a swamp for sure, with greenskins roaming around. Mission is very easy, because there are three regeneration shrines we can use. If you're lucky you can end mission having more forces than at the beginning. I advise to take same units as in previous mission, excluding warpfire thrower.

In front of us we can see a narrow passage with some Orcs behind it - charge at them, they're no match for you. Now turn right and slain another group of greenskins. As a reward we can regenerate forces near the first shrine - it's mostly useful when some of units have levelled up. 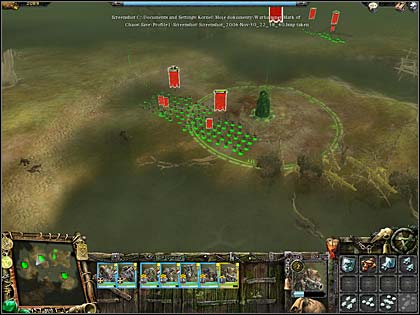 The last of regeneration stones

When we're healed move to the previous glade and this time go in the western direction. We will soon see another hostile group, but with boss this time. You can just run through them and regenerate once again. To the north lies next glade with last altar. Of course it's defended by some enemies, but who would care? Now some advice: don't' pick up third artefact laying near that shrine. Strike at last group with final boss first. When there are no greenskins you can see, go back to the regeneration stone, heal yourself and then pick up that artefact - mission is victorious.

After the battle we can upgrade five units and one canon we will take to the next mission. Of course some items are also a good choice.