Our task in this mission is to hold our positions for 15 minutes. First we deploy all marauders' troops on walls (both infantry and axe-throwers). Only damaged troops should stand near shrine to regenerate. Chaos warriors and knights should stay inside the fortress as a back-up.

We can divide this battle on two phases - before and after enemy units destroy walls or break the gate. Until this moment Imperial infantry will only use ladders to climb up the wall, and because of that we have to guard our throwers with own infantry. In some moment 2 hostile regiments will climb up on right part of walls. If we send there Thorgar with the strongest marauders' unit there should be no problem with them. 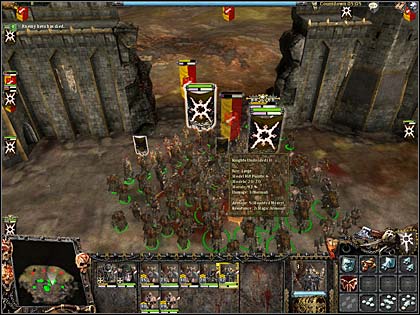 As you can see, somewhere there should be Imperial regiment

When our walls start collapsing we have to move most of our troops inside. Manoeuvring and strike at enemy's sides helps greatly. During the battle there will be two occasions to challenge hostile heroes, but it's probably better to crush them down with regiments. When time starts running out, it's good to heal mostly damaged troops at the altar, especially Chaos warriors and knights - they're most expensive. 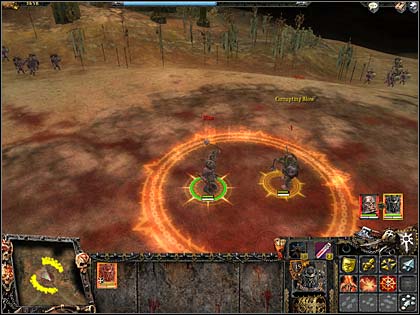 Some other Chaos champion tried to kill us... dreamer :)

During this mission my both heroes achieved 15th level. Thorgar learned Axe of doom, Unholy strength and warmonger, while sorcerer Wind of death, Steal soul and Call of the chase. After the battle we get a hellcannon and lots of gold, but we shouldn't enter the town, only move further to challenge some Chaos champion who tries to take our place. After his death we can repair our troops and make some reinforcements. Because to the next mission we can only take Thorgar it's up to you what you'll buy. I decided to acquire new regiments of Chaos warriors and knights, sergeants for all units and some weapons and armours for best troops.