This mission is easy and straightforward. We have to gather all Chaos' troops we can find. First we march north and kill two Imperial soldiers. Few seconds later we will encounter a little bit bigger group, but it's also no match for Thorgar Axe of doom and axe throwers help us greatly. Be careful - the mentioned skill is very powerful, but hams both friends and enemies. Use it only when you're sure, that there are no allied units in front of you. My idea for Thorgar: to be a tank.

Now we can choose between two paths: northern and western. Let's take the first one. Right after a turn we can see three items defended by another hostile regiment. Quick fight and treasure is our. Now we can go back to the main road, where, after short march, we will meet marauder's unit fighting swordsmen. We should help our allies and turn in the south direction, where another hostile regiment awaits. When there's no enemy around we can move west. 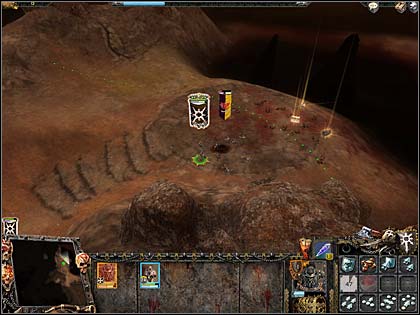 Further trip along this road will lead us to a small group, consisting of few marauders and sorcerer, being attacked by Imperial forces. It's good to move fast, because we want at least one man alive in allied unit. After that fight we move south where we can find some new items. When we gather them we can march north until we see regular battle. We should attack handgunners as fast as possible, because they can harm us greatly. Then we can destroy hostile infantry and mission is over

When we end that task we can move forward and enter a camp, where we will be able to regenerate our forces. In fact we don't have to invest in all troops - only four best units matter (probably 2 regiments of axe throwers, 1 of marauders and 1 of Chaos warriors. My heroes developed following skills: Thorgar Axe of doom and sorcerer Wind of death.