It's time for final battle. When I tried to do this mission for the firs time, I was easily destroyed. Remember: attack is the best defence, or at least partial attack :) First we have to deploy our troops - it's best to place whole army, where units seen on the picture below are. Because you will spend most of the time fighting near this narrow passage, there will be a little space to manoeuvre. Remember - take all shooters you can (but don't buy new ones) and no cavalry - only Stefan should be mounted. Ok, time to rock. 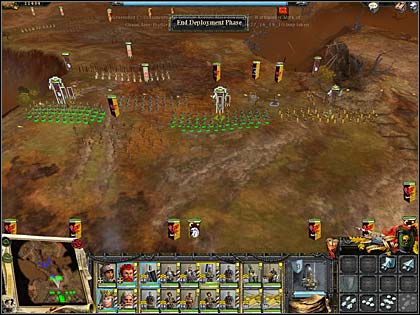 All your forces should stand near this place

Just at the beginning of the battle let's move to the first line of defence. You will notice a hill in the north direction soon. A hellcannon stands there and shoots at our troops. It's target for our artillery. Meanwhile first group of Chaos' servants will strike on us from the left - we should kill them as fast as possible and then send Stefan near previously mentioned hill, so that we will be still able to see the hellcannon. When demons guarding it suffer some damage - we can charge at them with our brave hero and destroy them easily. At this moment our siege weapons should switch target to other two hellcannons which will appear from the east direction. 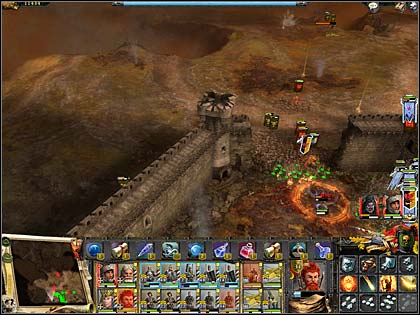 My first battle - I allowed enemy to crumble part of walls. This didn't end nicely.

For some time there will be enemy's forces attacking us only from the right direction. All the shooters you have should be enough to make foes change their mind. In some moment there will be a lot of Chaos' servants marching on us from both directions - don't worry, if you concentrate your fire, use spells and finish them off with melee troops, there will be no problems defeating them. But remember: artillery should only target hostile ranged units.

If your allied troop fighting near first line of defence die, withdraw to second one. Narrower pass is easier to defend. Shield your siege weapons all the time. In some moment Nurgle's sorcerer will appear. First attack him with infantry and then challenge him with Stefan. Right after his death next wave of enemies will appear. Fortunately narrow pass will help us crush them. Defend yourself bravely until you see the demon prince, which is your final target. Use on him the same tactics as on previous hero. One minute later you're victorious- congratulations!!!