For this mission I chose all Imperial forces except cavalry, flagellants, hellblaster and priest. I deployed troops in ordinary formation and started the battle.

In the beginning it's good to move all forces forward except siege weapons, which should be placed a little bit right and ordered to start shooting at foes standing near altar. Meanwhile some hostile regiments should attack us. When we kill them go to the mentioned shrine to regenerate. Now our artillery should start firing at Chaos' hellcannon which stands on a tower on the right side of the gate. When this one is destroyed, the other one, on the other side of the gate, should be a target. Remember to right-click directly on a cannon, not a tower or you will mark wrong target. Meanwhile all our troops should be healed - this shrine has a lot of power. 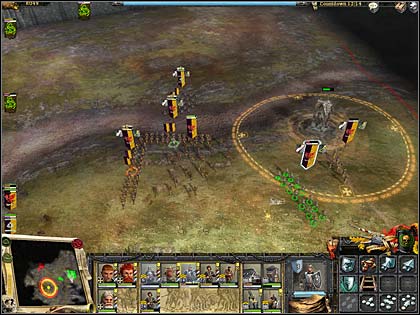 When we're ready, and hellcannons are destroyed, it's time to crumble walls. You can do this using cannons or powder kegs. First method is longer, but safer one. If you use kegs, remember to draw back after deploying them, or they will damage your troops. It's good to destroy at least two fragments of walls to have wider path to the fortress. 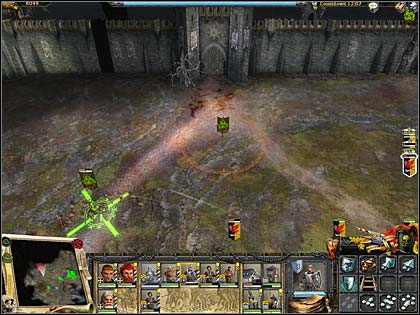 When desired fragment of walls is crumbled, it's time to move inside. This part is tough - many hostile units come from few directions, along with two heroes. Both of them were challenged by Stefan, who killed them easily. If you manage to shield your archers and cast some spells, there should be no critical losses.

During the fight my heroes gained few levels. Stefan ended Storm of steel, fire mage started learning Flaming shield of Andor and jade wizard Magical ward. After the mission we will see a movie and be transferred near Talabheim city. There we will once again control Elves.