For this mission I chose following units: all heroes, cannon, both handgunners' and cavalry regiments and swordsmen. I didn't take halberdiers, because I wanted to level up my second knights unit, though infantry would have been better. Because of that let's assume, you will take halberdiers. We deploy our forces as on picture below switching weaker horsemen for halberdiers. Now it's time to rock. 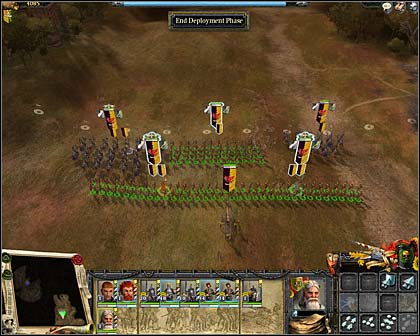 We have 30 minutes to reach priest - don't worry - it took me 15 minutes, so you don't have to hurry. During this time cleric will defend himself from all forces attacking him. First we march right - there is a small valley where three regiments of Skaven hide. They're no match for our troops so defeating them should be easy. After that our secondary task is done. 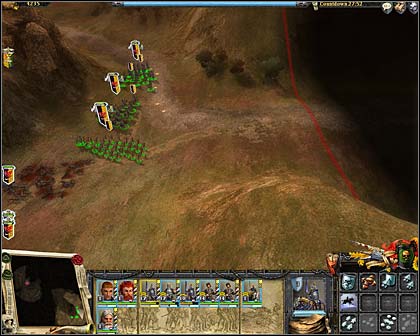 We move in the north direction trough second exit from the valley - be careful, just behind it hides another ratmen unit, which can strike us from behind. When we kill enemies we move a little bit further, to the plain space, and take up standard position. For next few minutes we will have to defend ourselves, because great numbers of Skaven will come. If you have 2 infantry regiments - avoid melee fights as much as you can. Your shooters should damage most of foe's units enough to make them flee. Look out for your cavalry, because it may stick in ratmen units and be slain very fast. If you have two such regiments - manoeuvre them very carefully - strike and withdraw. Also spells are very helpful, especially Father of thorns. When you kill two groups with rat-ogres it's time to move on. 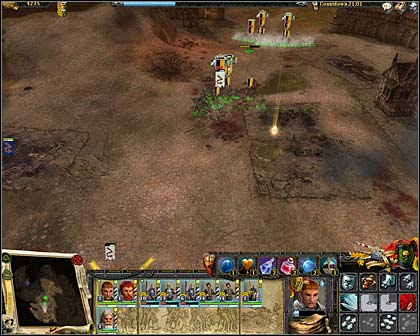 On the picture above you can see another place where we will have to stop for awhile. When we kill all Skaven troops we can move on until we meet last 2 foe's regiments with their leader. After short battle it's time to move close to the priest and the mission is over.

During that task my heroes achieved few levels. Stefan learned Blade of death skill, fire mage Conflagration of doom and jade wizard Earthlord. After the battle we can regenerate and spend all 25 point which brother Gunther has. I thought him the following ones: Tenacity, Warmonger, Implacable abhorrence, Unshakable faith and The undying servant.