Remember archers are most important troops and main damage-dealers in this army. Cavalry and ballista are only support, and spearmen should be a wall which has to protect shooters. Deploy the army as on picture below and begin the game. Move spearmen a bit forward and turn them to the Wall of shields and archers to the Burning arrows formation. Do not move the cavalry during next few minutes. You can charge with them only if there are no other hostiles on the horizon. It is important to have at least five riders at the end of first wave of Skaven. Do not change position until enemy hero appears. It's best to kill him from a distance. If he approaches too close, then we can challenge him with our fighter. When we already deal with that boss it's time to start the second phase of the mission. 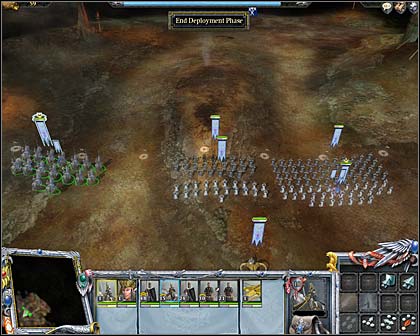 Positions of our troops

Now we have two roads to choose between: to the upper left or bottom right corner of the map. Probably our melee units suffer many losses, so it is good to use the small steps tactic. As I've already said shooters are our main strength. Restore the mode of normal shooting on the stronger of our archers' regiments and march left slowly. You should be very careful, because of rat-ogres coming from the northern direction. Concentrated fire supported by a bit of magic generally will be enough to drive them off. Do not play in chases in any circumstances. Additionally from our front there will be attacks of other Skaven regiments. Be careful when you approach the crystal - single unit will suddenly attack us from behind. That is why we should keep melee troops whole time near archers and to defend them in the case of a threat. 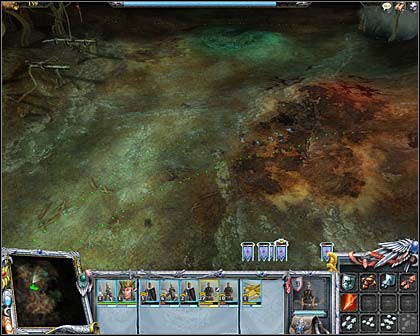 Few seconds before, there was first of crystals we have to destroy.

After destroying first crystal it is time to go to the second one. Until this moment most of hostile troops should be dead. But this doesn't mean we can stop being cautious. Near the target of our mission we will meet few last Skaven regiments (including stealthy one) with a hero. Fortunately our archers should be able to kill most of them before they reach our lines. During this battle my heroes reached 22nd level. Aurelion finished Divine sight and started Inspired leader. Fighter continued developing command tree buying all passive skills he could. 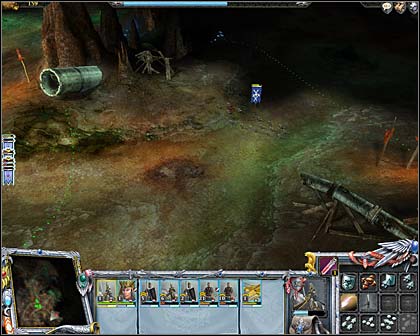 One of the last Skaven regiments defending second crystal.

My losses were so heavy, that despite 5000 gold earned during a battle I had to sell few items to regenerate my troops and buy them some upgrades. After visiting the camp we can freely march forward until we reach Imperial castle. At that moment we will gain control on von Kessel's troops.