We begin this mission having only Aurelion. The task can seem very easy from the beginning, but you will have to make a lot of efforts to not lose the whole squad at the end. This time there is no deployment phase.

At the beginning some marauders' group will jump up from behind trees, one shot from Khaine's Wrath and they fight much worse. There is no problem with them generally. Knock out them and move in the direction of the totem. There a clash with another regiment waits for us, after which we should destroy those bindings. We have first, very effective, squad of archers after a short moment. We add Aurelion to it and march left. We will encounter one more hostile regiment which will not even manage to come to us before its morale breaks down. Pick up gold and come back to the main road. 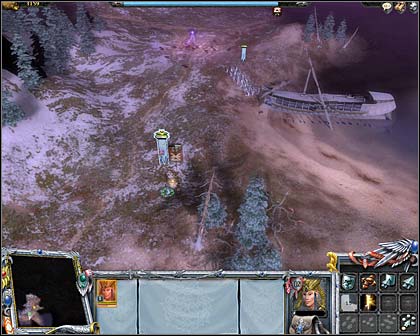 First totem with archers. At the top of the screen there are crossroads. To the left - gold, to the right - another regiment.

When we continue wandering in the direction of the right part of the map we will come across on imprisoned spearmen. Marauders and Chaos hounds squads stand near. Because we already have shooting unit, it is good to destroy the totem from a distance. Right after we break down that stick, Chaos' servants will attack that freed regiment. That is why you should aid spearmen as fast as you can. This fight does not make many problems fortunately. Soon after the victory we march north. The Chaos' knights stand on the hill to the left. Use Khaine's Wrath first, then approach with archers and, when the enemies move closer to us, charge at them with the infantry. The next totem stands together with an imprisoned cavalry a little further. Crush marauders, free colleagues and move east. 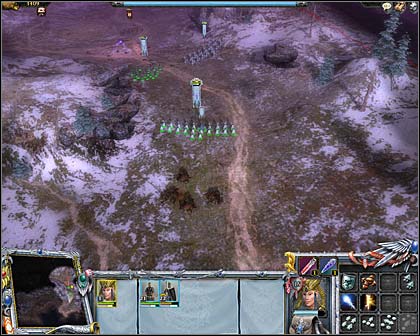 Third totem along with Silver Helms.

We should modify our tactic a little from this time. Spearmen with archers go ahead and Silver Helms at their side. When we encounter the enemy, charge with infantry, and when the opponent sticks in it, finish him off with riders. After elimination of several next squads, we will reach a hill, where last totem with imprisoned ballista stands. It is protected by demons of Khorne - this enemy is much tougher. Apply checked tactics: Khaine's wrath, shot with bows, charge of the infantry, and charge of the cavalry. Unfortunately we can bear certain losses here, that is why you should be very careful. When we settle matters with bloodletters, free the ballista and prepare to the most difficult part of the mission. 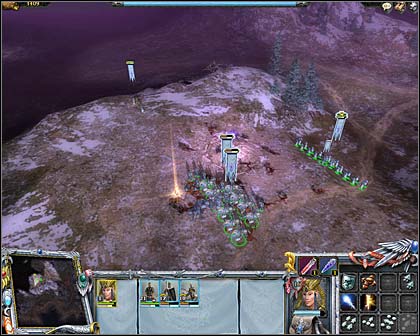 The hill, we will defend

North of the hill there is large group of Chaos' servants, along with a champion, who must be killed. Deploy your army in the following way: ballista lightly to the right from the place in which it stands, spearmen where shooters on the picture above, cavalry a bit behind them at their right side and archers next to ballista. First we shoot with Khaine's wrath, ballista and archers at the Chaos' warriors and marauders group. This will cause the whole enemy's group will start moving. Hounds will reach us first. If we have still dozen or so spearmen, we can risk leaving the cavalry in the reserve. When warriors and marauders with the champion group come to us, move Silver Helms near the enemy's main forces and fall on his backs in aim of destruction of two regiments of axe throwers. After killing them all, attack the rest of foes from behind. Don't forget using ballista. If we have little spearmen at the beginning of the clash, fight off only hounds, and attack Chaos' main forces with the cavalry, as soon as they will be interested in our infantry. The champion makes up the largest problem. I decided to kill him with the help of troops, though he gave me large losses. Because Aurelion did not invest in the Duels tree, I preferred not to risk the fight one-on-one with this tough guy. The fight is heavy, but you will win it, though you should be very careful not to lose even on of your units. Remember to withdraw regiments which have been suffering heavy losses. The mission is finished as soon as you kill last enemy.

During this task Aurelion reached 17th level. I intended to spend gained in this way points on the development of Divine sight skill from the Command tree. After mission we can go to the city, where we should buy another archers and spearmen, second hero with mount and sergeants for all units. Unfortunately the next mission forced me to switch from the quality to the quantity tactic, but I will tell about this in a moment.