This mission is typically defensive one. We begin it surrounded by urban buildings, which we have to defend. I recommend initial setting, such as on the picture below. As you can see, I decided to take hunters instead of one of handgunners' regiments, though they were surely weaker. I simply wanted to raise their level of experience. 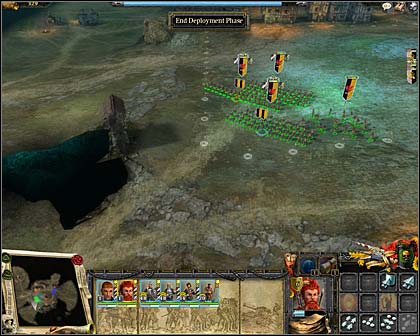 Initial troop deployment. But as I see it now, I should place halberdiers in front of handgunners :)

First we march in the south-western direction, where we will encounter marauders. A quick fight and we are free to move north. It is proper tense good to make haste and turn on the running mode, because two hostile groups attack two lonely buildings. Crush them quickly and then distribute your armies on two groups. Halberdiers and handgunners under the lead of the wizard leave near chalets, but send back the Stefan with swordsmen and archers to the place, near which we began the battle. Meanwhile allied squads, protecting the eastern part of the city, will be attacked by two groups of marauders - we don't have to bother of this, because enemies will be trod into the ground very quickly. Each of our groups will be attacked a moment later by other hostile troops. When we deal with them, we should gather our army in the town quickly. 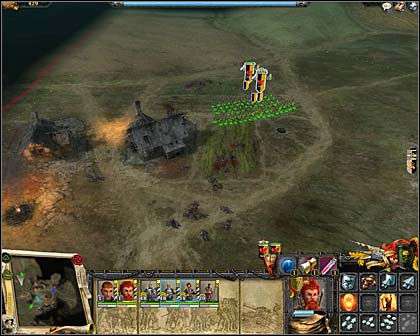 Those two lonely buildings, which should be defended, but is this possible?

Hurry is advisable, because more and more large groups of Chaos' servants will begin to approach from the east - our allies will soon be massacred without our help. I recommend the following tactic: move forces east, destroy enemies attacking from that direction and then return to the west part of the town in aim of dealing with two other waves of foes. Now several squads will approach from the south-east, together with a chaos spawn which is the heaviest enemy in this mission. After that, the last group, including hero and another beast will appear. I challenged the champion, but I would not say I defeated him without problems, in spite the twice higher level (10:5). That is why it is better to let our squads to finish him off. From the other hand slaying him gives our hero a bit of experience. The mission is finished after destruction of last Chaos' servant. Don't be concern, if you did not manage to collect some objects from the ground - they will hit to your rucksack anyway. Heroes won a bit experience in a lap time. The wizard developed in Master of Agsha further, in the Stefan case, after reaching by him 11th level, I decided to invest in the duels tree, and concretely in Deadly strike - it later turned out to be a good investment.

We hit to the city, after finishing the battle, where we can arm ourselves. We, as usual, should replenish personal lacks, and then look to barracks - we can purchase cavalry squadron there. Then it is good to buy them the sergeant, musician and bannerbearer, the best weapons and armours.