This task is a little bit harder - we've got to aid ally troops in their fight with greenskins. But before we start mission, it is good to deploy our forces. I advise to put melee units at the front, shielding handgunners. Stefan should lead swordsmen and wizard one of shooters' regiments.

If you're in haste, you can just run to the defenders' camp. But it is good to turn right first and go to the swamp. When we reach it, we should stop and wait for two Orcs' units, which will come from behind a hill. If we rush, we will be ambushed. When we kill the attackers, we're free to continue our march and strike two regiments of Goblins. After that fight we can destroy few tents and collect some items. 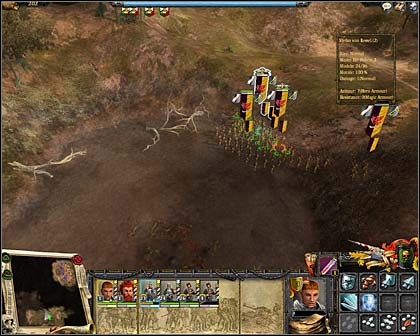 To the left there where Orcs, to the right - Goblins

When we come back to the main road, we will reach two barricades after short time, one at each side of the path. Now it is best to deploy one handgunners regiment at each barricade, and the rest of troops between them. Now, for few minutes, we will be attacked by some greenskins' forces. We shouldn't strike with melee troops until the enemy is very close or there is some shooters' regiment we are willing to destroy. The last group will include troll, who is toughest foe in this mission. We should kill him as fast as possible. 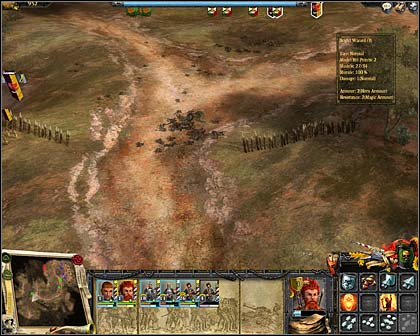 The last thing we are to do is to reach defenders' camp and help them fight off the rest of enemy's troops. It's rather easy, because most of work is done by our allies. When foes are fleeing, we have time to gather treasures. Meanwhile our heroes gained new levels, which should be spent on completing previously started skills.

After this mission I entered my camp to heal troops, buy weapons and armour for them and a mount for Stefan.