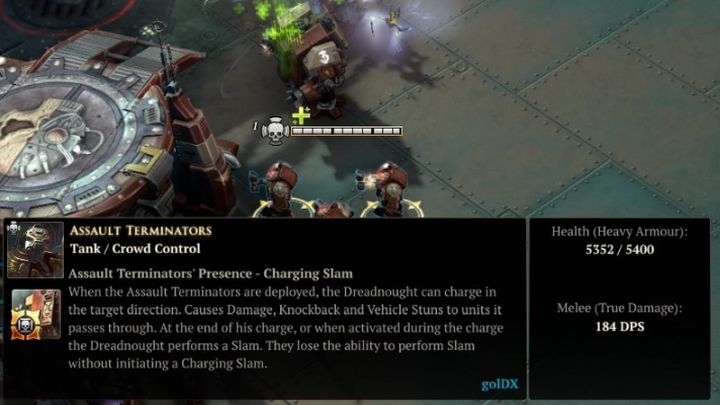 Assault Terminators are one of the few units in the game dealing true damage.

On the other hand, Armor-piercing damage is good against armored foes, dealing 100% damage, but less useful when fighting enemies with Normal armor - in that case, enemies will suffer only about 40% of total damage. The solution to the Normal/Armor-piercing problem is the true damage attack type, dealing full (100%) damage against any foe, regardless of their armor.

There's only a small group of units capable of dealing true damage - elite units, like Gabriel Angelos and Assault Terminators, and regular ones, like the Killa Kan from the Orks. True damage is extremely useful when dealing with heavily armored enemies and buildings. The best example in the game is the Space Marines' Assault Terminators unit. Normally, they are ineffective against buildings, as they are only dealing normal damage (22% of their total damage output). However, by finishing an upgrade in the Arsenal, a player can change their damage from normal to true, causing them to be extremely effective at harassing opponents, especially at destroying Listening Posts.