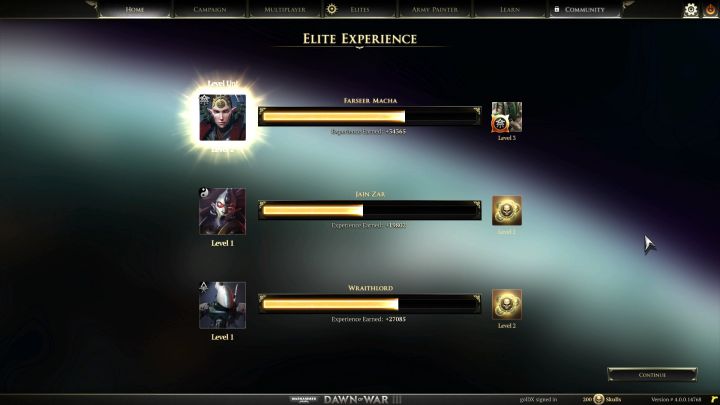 As mentioned in "Elite points and elite units chapter", each elite unit in the game receives experience points. They receive them for taking part in the match - each kill, building destruction or elite unit elimination gives them a certain amount of XP points. Experience points are awarded to the elite units at the end of the game / campaign mission and each one of them can advance up to level 10.

Unfortunately, the increase of level of an elite unit doesn't come with the increase in combat capabilities. Levels have no influence on the amount of health points / shields or damage output, nor they unlock any new abilities for the units. However, they reward the player with new Doctrines and Skulls, the in-game currency that can be used to unlock new elite units and more Doctrines. Additionally, advancing the unit to the 9th level unlocks a special skins for them to use in combat. It goes as follows:

Additionally, 30 achievements are associated with advancing the units to the maximum level, 1 achievement per elite - more on that can be found in the "Achievements" chapter of this guide.

Note - if you leave a multiplayer game before it ends (before destroying any of the power cores), your elite units won't gain any experience points. Keep that in mind before deciding to flee and leave your allies!