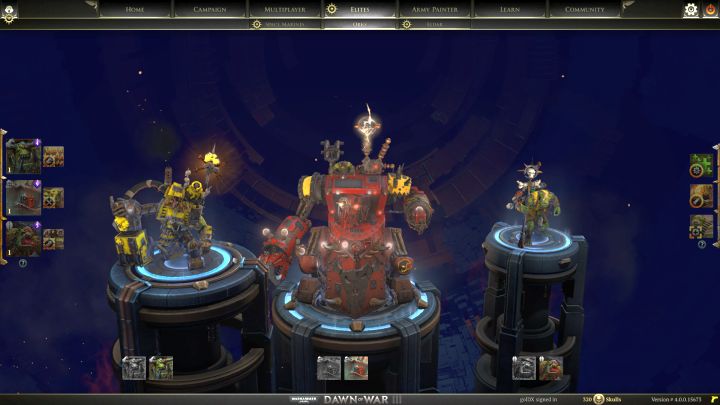 Probably the worst elite unit in the entire game. Stormboyz are a tempting choice, as they cost only 2 elite points, allowing a player to summon them after 6 minutes of game, but they are effective only during the first 10-15 minutes. Their effectiveness drops extremely quickly - when there are more enemy units (5+) deployed on the battlefield, they become virtually useless and the player is left with a unit that wastes a precious elite slot. Avoid them at all costs, there are better Ork elite units to choose from.

Weirdboy Zappnoggin is similar to the Stormboyz elite unit, but his effectiveness won't drop so suddenly. This unit is extremely useful when harassing enemy forces, especially during the first 15-20 minutes of the game. His abilities allow him to teleport over long distances and take out a single enemy unit in seconds. However, once those abilities have been used and are on cooldown, Weirdboy Zappnoggin's effectiveness drops to that of a cheapest unit, rendering him, basically, useless.

If you know that you will be able to exploit his abilities to their fullest potential and jump around the whole map harassing enemies, you should choose this elite unit. Otherwise, you can simply ignore Weirdboy Zappnoggin and choose a different elite unit - Orks are the most effective during the early game and you can manage even without a single elite unit deployed on the battlefield.

Da Kommando is one of the best elite units that can be deployed early in the game. He costs only 3 elite points and allows a capable player to make the enemy's life a misery, especially during one on one games. Da Kommando can deal immense damage in close combat - he is capable of taking out an entire unit with only two shots. What is more, he can lay mines and become invisible (camouflaged), making him hard to catch and take out. He is extremely effective at taking out and capturing enemy resource points - the enemy has to send at least several units to be able to stop this elite unit.

His effectiveness drops after 15-20 minutes of the game, but it's still worth to invest those 3 points into Da Kommando, as he is second to none when it comes to early game presence.

Gorgutz is the Ork elite unit that almost every player will know about - this is the first unit that you will be controlling during the Ork campaign, as well as one of the elite units unlocked from the very beginning. This is also one of the best elite units in the entire game, mainly because of his special abilities.

One of them, Grapplin' Klaw, allows him to jump towards the target, dealing damage to everyone in a small area and taunting them, forcing those units to attack Gorgutz. This is extremely lethal when used against deployable units, such as Devastators with Bolters and Snipers, as well as all ranged units in the game. What is more, by using this ability Gorgutz can drag units from under heavy cover. The second ability, Spinnin' Klaw, allows him to create a shield around himself, protecting every ally unit underneath it from ranged attacks. Additionally, Spinnin' Klaw will deal damage to any enemy unit in the area.

Gorgutz costs 4 elite points and his presence in your roster is almost mandatory, regardless of your gameplay preferences. What makes him even more effective is the fact that he is one of the most durable units in the entire game, second only to some of the most expensive (7-10 elite points) elite units.

Another Ork elite unit that costs 4 elite points and another one whose effectiveness depends solely on the skill of the player. He can use multiple useful and deadly abilities, but they require a lot of attention and clicking to be fully effective. If you are a player that can move an entire army and simultaneously order Wazmakka around, you should give it a try. Otherwise, you should just look for a better unit.

One of the more expensive Ork elite units, as they cost 6 elite points, but at the same time well worth the investment. Meganobz are the heavily-armored Ork infantry, capable of withstanding an absurd amount of punishment before the enemy can take them out. By collecting Scrap they gain charges that can be used to fire rockets, powerful enough to pierce through even the thickest armor. They can also create an electrical wall, slowing down enemy units and boosting the speed of allied troops - perfect when preparing to rush an opponent's army.

6 elite points is a good price for this unit. Coupled with Gorgutz, this will allow your army to easily reach the enemy forces before they can even react.

Another unit that looks promising, at least in theory. A powerful walker unit that is extraordinarily powerful in melee and whose special ability can dig a tunnel, allowing your units to easily move from point A to point B. However, the biggest flaw of this elite unit is its price - 7 elite points is too much for it, as the Ork titan units, Gorkolos and Morkolos, cost only 2 more and are significantly more effective. It's definitely not worth the investment.

Gorkanaut is one of the Ork titan units, specialized in ranged combat. He is capable of devastating the entire enemy army consisting of numerous and rather weak units (such as most infantry in the game), as well as taking out heavily-armored targets with ease. The special abilities of this super-heavy walker are what's most threatening about it. The first allows him to fire a barrage of projectiles, severely injuring the target, whereas the second one lets him drop a huge rock (similar to the one from the Roks super ability) onto the battlefield. The latter one can take out most enemies in the game with a single shot - only the titans and the enemy core will survive the impact.

However, those abilities have a huge flaw - an very long cooldown time. This makes Gotkanaut extremely effective as a unit capable of exterminating enemy units in seconds - if that's what you're looking for, you should give him a try. Also note that units can reinforce when near Gotkanaut.

An elite unit you will be controlling during the Ork campaign. Without a doubt the most durable unit in the entire game. Not only it has an absurdly high health pool, it can use an ability that can absorb all incoming damage and one that can summon up to four Ork builders, Gretchin, to repair Morkanaut.

Beauty is a slow-moving super-heavy walker unit that is almost impossible to stop. Additionally, one of its abilities allows this elite unit to launch a huge fist, dealing damage and stunning enemies. What is more, the ability can then be reactivated, retracting the fist back to Beauty, dragging all units (both allies and enemies) towards the walker. This makes this unit extremely effective at crowd control - every player will start panicking when all of his ranged units are suddenly dragged into the middle of enemy army.