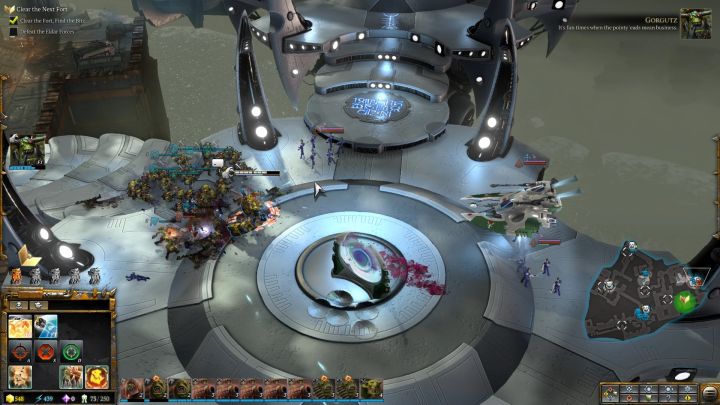 Orks in Warhammer 40,000: Dawn of War III are characterized by their extremely high numbers. This, however, comes at a price - their troops, especially the low-tier ones, are less durable than those of Space Marines and less mobile than the Eldar forces. Orks are very strong during the early game, mainly because of their starting infantry, Boyz, easy outperforming the starting units from the remaining factions. While playing as Orks, you must make use of four different faction mechanics: Scrap (and Loot), Salvage, Waaaagh! Towers and the Roks super ability.

Scrap is, basically, an additional resource available only to the Ork faction. They use it in the process of Loot and Salvage. The first allows any Ork unit (aside from their builders, Gretchin) to collect Scrap and increase their combat capabilities. A unit equipped with this valuable resource can gain a new ability (or have one of the present ones enhanced), get a shield or receive additional charges that will allow it to use abilities and/or attacks more often. Loot is a thing that you should always remember about, as Ork units without Scrap are generally less effective than the units from other factions. Proper usage of this resource will allow you to increase the overall effectiveness of Ork units and elites and level the playing field.

Scrap can be acquired from two different sources. The first one is a Waaagh! Tower. Those buildings generate Scrap each 30 seconds. The resource will fall to the ground, allowing your units to use it. With higher escalation phases, the amount and type of Scrap will also change - more on that can be found in the chapter about escalation phases. Also, scrap is left behind when enemy vehicles are destroyed. Each time an enemy vehicle is destroyed on the battlefield, Scrap will appear in its place. The size of the Scrap depends on the size of the machine - most will leave behind a medium sized one, but some will give you large ones.

Salvage is the second method of using Scrap. It allows the Ork builders, Gretchin, to use medium and large Salvages to construct any mechanical unit of this faction - Trukks, Deffkoptas, Killa Kans, Deff Dreads and Big Trakks.

Units created with this method are cheaper than the ones produced through the production buildings. What is more, the production time is also significantly shorter and will take only a few seconds, whereas building the most expensive Ork units will require several times more time. There are, however, some drawbacks to this powerful mechanic. First things first, you still need buildings to unlock specific units (as well as the adequate amount of Waaagh! Towers) to be able to produce the unit. Secondly, the created unit won't be at full health - in most cases it will have 3/4 of total health, but the amount can vary depending on the "health" of the Scrap.

Waaagh! Towers are one of the buildings of the Orks, connected to the most important mechanic of this faction. First things first, Orks, unlike Eldars and Space Marines, can't increase their tech level by upgrading the main building. Instead, they must build Waaagh! Towers. In order to get to the highest tech level, you must construct 5 of those. Fortunately, losing any of them won't decrease your tech level - you just need to construct them once.

Secondly, those towers are capable of generating Scrap. This is by far the easiest, safest and most efficient source of this valuable resource, especially if you want to equip your units with it. Waaagh! Towers also have access to a special ability called Waaaagh!. Once activated, a music will be heard from the tower, hyping nearby Ork units. After a short while, a battle cry will be emitted from the tower, increasing the attack speed and damage dealt of every allied Ork unit in the area around the building. Additionally, by having Gorgutz in your army, this ability will also heal (and replenish) some of the health of your injured units, allowing you to reinforce your troops for free. However, note that the enemy will be able to see your building on the mini-map while the Waaagh! is active and that the building will receive additional damage for the duration of the ability.

Finally, let's talk about an equally important aspect of this building - their defensive capabilities. Waaagh! Towers are equipped with turrets, making them extremely effective at protecting resource points - together with Listening Posts, they should be able to take out small groups of enemies on their own. This is also the only defensive structure in the entire game - Listening Posts can only be placed on top of resource points, whereas Waaagh! Towers can be built anywhere.

Roks is the super ability of the Ork faction. Once activated, it sends a tractor beam to the specified place. It will constantly deal damage and slow down units located around it. Additionally, it will simultaneously increase the area of effect as the ability goes on - this is represented by a progress bar. Once the mentioned progress bar is filled, a huge rock will fall on the battlefield, dealing immense damage to all enemies in the area.

This is the most difficult super ability to control, but it's capable of dealing the highest damage. It's easy to run away from the strike zone, which is why you should always use a handy trick. The tractor beam can be picked up by allies and enemies. Use a durable and mobile unit, such as Gorgutz, for the task, pick up the item and order Gorgutz to run into the center of the enemy army and allow the rock to fall there. Picking and dropping the tractor beam is trivial - you just need to send a unit to interact with the object.