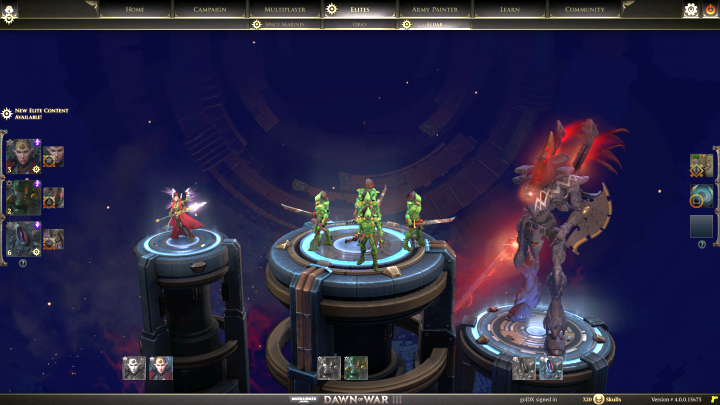 Like with the Space Marines and Orks, there are 9 elite units that an Eldar commander can choose from. Those are: Striking Scorpions, Ranger Ronahn, Macha, Jain Zar, Warp Spiders, Autarch Kyre, Wraithlord, Wraithknight and Wraithknight Taldeer.

Striking Scorpions is one of the best elite units in the game that can be deployed at the beginning of the game - 2 elite points can be accumulated in 6 minutes! They are extremely effective in melee combat and negate one of the biggest flaws of Eldars - the ineffectiveness of Dire Avengers when dealing with Ork Boyz. However, as with every cheap elite unit in the game, they quickly lose their effectiveness, which is why they should be used only in 1 on 1 matches, especially when you are against an Ork player.

Ranger Ronahn is one of the worst elite units in the entire game. He can't do much damage, his special abilities are very situational (not to mention that his teleport to stealth cover is completely useless in most games) and he is extremely vulnerable to enemy attacks. 3 elite points can be spent better - even the Strking Scorpions will be a better investment.

Macha is one of the best elite units in the entire game - her low recruitment cost allows a player to deploy her relatively early and her effectiveness remains high during the whole game. During the early stage of the battle you will mostly be using her two offensive abilities known from the campaign - one allowing you to throw her spear, the other to detonate it, both decimating infantry units.

Her effectiveness remains high during the entire match, mainly because of her third ability, allowing her to put multiple units into stasis, rendering them useless for the duration of the ability and creating confusion in the enemy ranks. Her doctrine is also very good - all elite units you deploy on the battlefield will be put into stasis and will regenerate a portion of their health instead of dying. This can happen once per elite unit (and is refreshed when the unit is deployed to the battlefield again), but it can save a dying unit, giving it a second chance.

In general, a weaker version of Striking Scropions. Sure, Jain Zar deals more damage and is capable of eliminating most elite units in one on one encounters, but she also costs twice (4 versus 2) the amount of elite points when compared to the mentioned Striking Scorpions. As soon as more units appear on the battlefield, her effectiveness will decrease severely, making her almost useless. Use her only in 1 on 1 matches, especially against an Ork player.

Warp Spiders is an elite unit that can create confusion in the enemy ranks. They attack from a short distance and deal quite high damage and all of their abilities allow them to teleport from one place to another. Their slowing mines ability is the highlight here - by using them, they can teleport to multiple places, placing special mines that will damage and slow nearby units. However, they need a tremendous amount of player's attention to be useful on the battlefield - if you won't use their abilities regularly and teleport them from one place to another, they won't be much stronger than a regular ranged unit. Additionally, they cost 5 elite points.

Another peculiar Eldar elite unit and also the only one in the entire game that you won't be controlling or fighting against during the single player campaign. The only elite unit that works in "two modes" - normal, when Kyre is walking on the battlefield and flying, when Kyre is turned into a Skimmer. Unfortunately, mastering the use of this elite unit will take some time and his abilities aren't good enough to justify the high (5 elite points) deployment cost.

Wraithlord is, basically, the weaker version of Wraithknights. A large walker unit, with large health pool and capable of obliterating multiple enemy units on its own. However, this unit is completely not worth the cost, especially when compared to Wraithknights. It costs 7 elite points, whereas the most powerful Eldar units only 2 more (9). It's better to just ignore it and go for one of the Wraithknights instead.

The most expensive Eldar elite unit in the game. Wraithknight is a super-heavy walker, extremely effective at ranged combat, easily taking out multiple enemy units in seconds. Similarly to the other "version" of the unit (Taldeer), Wraithknight has an ability that allows it to jump to a specified position, dealing damage and knocking away all enemies in the area.

You should use this (or the other type, Wraithknight Taldeer if you prefer melee combat) at your disposal. It costs a tremendous amount of elite points (9), but it's well worth the effort. If you, however, prefer a unit fighting in melee range, you should invest in the one described below.

An elite unit that players who finished the single player campaign will know about. Wraithknight Taldeer is probably the most powerful melee unit in the entire game - no other unit can defeat her and even other titan elite units won't be able to keep up with her melee damage. What is more, she has one of the most overpowered abilities in the game, allowing her to set up a shield in the specified direction, absorbing all attacks and, at the end of the ability, generating a pulse that will put every unit standing there in stasis.

This is one of those units that can be send into the middle of enemy army and be simply forgotten about while the player focuses his/her attention on the rest of his/her army. She is well worth the 9 elite point deployment cost.