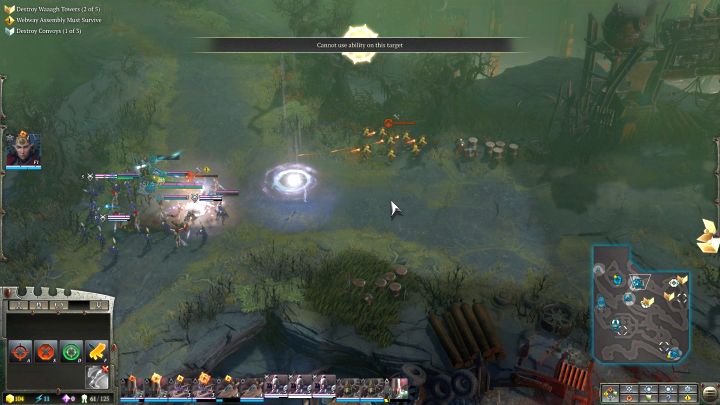 Eldars can easily move all of their buildings.

The Eldars outperform other factions when it comes to mobility which they get from a passive ability, as well as the possibility to relocate all of their buildings. This makes this faction extremely effective at hit & run tactics - striking your opponent, retreating back to the base and then repeating the whole process after a moment is a core tactic. However, their units are more vulnerable than those of Space Marines and less numerous than the Orks, making them quite ineffective at prolonged encounters. While playing as Eldars, you must make use of four different faction mechanics: Fleet of Foot passive ability, Relocate, Connect Webways and the Eldritch Storm super ability.

Fleet of Foot and Eldar shields

Fleet of Foot is a passive ability used by every single unit of the Eldar faction. As long as they are in close vicinity of a Webway Gate, they will be granted a tremendous speed boost, allowing their units to move around the area extremely quickly. The speed buff is so great that even the quickest Ork and Space Marine troops won't be able to keep up.

What is more, Flee of Foot offers more than a simple boost of speed. It will also increase the regeneration rate of Eldar shields. This ability makes their units so effective at harassing enemies and hit & run tactics. You can place a Webway Gate near the battlefield, send your boosted units to attack the enemy and retreat them back to the building once their shields start to wear down. After a short while the shields of your forces will be replenished (and the health of enemy units certainly won't) and you will be able to strike again. Properly performed, this tactic should allow you to harass your enemy without taking any loses. Note - you need to retreat your units before their shields are broken. Once they don't have their shields, they will quickly start losing their health to the enemy fire - and this will decrease their numbers, forcing you lose resources and reinforce them.

Relocate is a special ability available to all Eldar buildings, aside from generators and Listening Posts placed on top of resource points. It allows you to relocate buildings to any place on the map, as long as you have that area revealed. Once the ability is activated and the relocate location is set, you just need to wait a few seconds and the building will be teleported to the new place. The ability itself has a long cooldown time.

This ability gives countless possibilities. You can use it to move a building placed in a distant location and relocate it closer to the battlefield, allowing you to easily reinforce your units and train new squads. You can do the opposite - a building that was placed near the battlefield can be evacuated at any moment, allowing you to save precious time and resources. However, this ability is most useful to transport Webway Gates around the entire map, allowing your units to have the Fleet of Foot passive everywhere they go, immensely increasing their offensive and defensive capabilities.

Connect Webways is another special ability like Relocate - available to all Eldar buildings aside from the generators and Listening Posts placed on resource points. This allows you to connect two different buildings and form a Webway. A Webway is basically a portal - sending unit to one of the connected buildings will teleport it to the location of the other one. This allows you to quickly move your units around the entire map.

What is more, this ability can easily be linked with Relocate. For instance, you can send one of your buildings to a distant location near the enemy base, use Connect Webways to connect it to a construction placed in your base and use the portal to send your units near the enemy base. This will allow you to move your units around the whole map without any costs and limitations. However, keep in mind that once you use Relocate, you must wait for a short while before the portal from the ability is available again. Additionally, using Connect Webways on a building that is already connected will overwrite the previous connection.

The Eldritch Storm is the Eldar super ability. It allows the player to create a devastating storm at the specified location, dealing damage and slowing any enemies in the area. Additionally, the storm can be controlled, allowing you to chase after fleeing enemy units or to use it to simply break the enemy formation.

The ability has a second "form". The energy of the storm can be "given" to any unit (but you should always use an elite unit, as they are more durable than most regular units), turning it into a conduit. Once the process is complete, the conduit will absorb the storm, preventing it from dealing moderate area of effect damage and will start attacking random nearby units with powerful lightning bolts, capable of dealing tremendous damage. However, keep in mind that the enemy can either stun or kill the conduit unit - this will revert the storm back to its "destructive form".

There's only one problem to the ability - it requires 2 elite points. Using the Eldritch Storm can save your skin, but it will also severely delay the moment at which you will be capable of calling more powerful elite units to the battlefield.