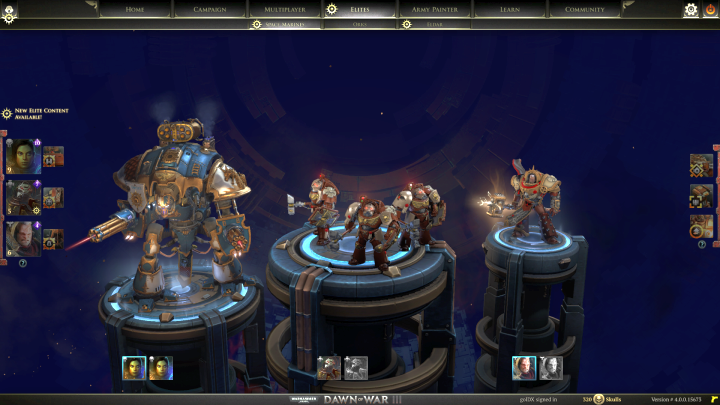 Like with the Eldars and Orks, there are 9 elite units that a Space Marine commander can choose from. Those are: Kill Team Ironmaw, Chief Librarian Jonah Orion, Chaplain Diomedes, Gabriel Angelos, Terminators, Assault Terminators, Venerable Dreadnought, Imperial Knight Paladin and Imperial Knight Solaria.

The cheapest Space Marine elite units, extremely effective during the early game (first 15-20 minutes). This is basically an enhanced Tactical Marine unit which can be equipped, for free, with either a flamethrower or a rocket launcher. The first is deadly against enemy infantry units and doesn't require activating like the flamethrowers of Tactical Marines, whereas the second one significantly increases the effectiveness of the unit against heavily armored targets.

This unit has a very useful doctrine. It allows Kill Team Ironmaw to deploy anywhere on the battlefield, as long as you have vision there. What is more, you can deploy any elite unit near Kill Team Ironmaw. It makes it extremely useful when planning a sneak attack on the enemy base, or when you want your units to jump into the middle of the enemy army. Additionally, they have a special ability that allows the player to call them back - once done, they can be deployed again within seconds, with full health and a new weapon upgrade.

In theory, Jonah Orion looks promising - a decent support unit, with numerous useful abilities to choose from. Thanks to them, he can deal damage to enemy units with a lightning bolt, enhance allied units and, if needed, create a shield that will block enemy ranged fire and unit movement. The biggest problem comes with the said shield - when used properly, it can save allied units or block enemy movement, preventing your foe from retreating. However, allied units located inside the shield won't be able to attack as well, not to mention their inability to leave the protected area. Incorrect usage of this ability turns it into a death trap.

Jonah's presence on the battlefield influences the Plant the Standard ability of Space Marines as well. Once he's deployed, the standard, outside of its typical bonuses, will also protect nearby units with a shield (the same as Jonah's ability), blocking enemy movement and ranged attacks. Again, this can cause you to create a death trap for your troops. This is an elite unit that should only be used by experienced players.

Diomedes is a combination of Gabriel Angelos and Jonah Orion. This is an elite unit that is partially focused on supporting his allies, while simultaneously being able to take on enemy fire on himself as a tank. However, the fact that he fights in melee range and has only a single ability makes him less effective than other elite units. On the other hand, he gives you access to a powerful doctrine, similar to that of Macha from the Eldar faction - when one of your elite units is about to die, it will instead be rendered invulnerable to attacks for a very short time, allowing you to retreat it from the battlefield. Unfortunately, this ability has a very long cooldown time.

The basic elite unit that every player will have access to, as well as the main elite unit used during the single player campaign. Gabriel Angelos is the most effective during the early stages of the match, when there aren't large groups of ranged units on the battlefield. He is capable of defeating most units in the game, especially in the same price range, on his own, as well as taking out several entire units without the help of anyone.

Unfortunately, his usefulness starts to diminish as the game goes on, when most of the players have access to multiple units at once. When that happens, his abilities are no longer effective and the fact that he moves rather slowly and is limited to melee combat makes it even worse. This makes Gabriel Angelos extremely effective during the first 15-20 minutes.

A Terminator squad is a powerful unit, extremely effective in combat. They have a large health pool, are capable of dealing with every unarmored foe, especially in ranged combat in which they specialize (but they can hold their ground in melee as well) and are immensely powerful when dealing with large groups of enemy infantry, which they can easily decimate with their rocket launcher ability. They are probably the slowest units in the game, but they can use a teleport ability allowing them to move around the battlefield instantaneously.

This would be an ideal elite unit if not for their price - 6 elite points. Calling it during the mid-game is guaranteed to prevent you from deploying any of the titans (Imperial Knights), as collecting even those 6 points back will take you at least 10 minutes. It's worth to use them when you're not planning on deploying Imperial Knights - otherwise just ignore them.

However, those units are completely not worth it. Even though they are tough and hard to take down, they move extremely slow (and the Teleport ability has a long cooldown) and can only fight in melee range. This allows most units in the game to easily outrun them and harass them from a safe distance. The biggest problem is the price - 7 elite points is only 2 points less than the Imperial Knight Paladin. It's not worth to use them.

Venerable Dreadnought is the modified version of the units available to Space Marines. Created with the sole purpose of ranged combat, this unit is capable of dealing with practically any target on the battlefield - and capable of taking down all, even the most powerful vehicles, in seconds. Additionally, Venerable Dreadnought can fire a powerful plasma projectile - when used correctly, it can devastate the enemy army. What is more, when Venerable Dreadnought is deployed, plasma rifles (after purchasing the necessary upgrade) of Tactical Marines won't overheat - if you use those units often, this elite unit is a must-have.

However, there's the same problem as with the Assault Terminators - deploy cost. Venerable Dreadnought requires 7 elite points - points that can be used more efficiently. It's better to wait several minutes and deploy one of the Imperial Knights instead.

Imperial Knight Paladin is almost the most expensive elite unit in the game and there's a reason for that. As with any titan unit (all of the units recruited with 9+ elite points) he is capable of devastating the entire enemy army on his own, turning the tide of the game in seconds. He can attack both from a long distance and in melee range. Additionally, Paladin has access to three special abilities. The first one is a shield, allowing him to absorb all enemy fire from a specific direction. This can be useful when advancing towards a large, range-oriented enemy army.

The remaining two abilities are purely offensive. One of them allows Paladin to fire a powerful projectile, going through multiple units and causing immense damage. The second one is used to decimate units attacking Imperial Knight in melee range. This is a very expensive elite unit, as it costs 9 elite points, but you should always try to summon the Imperial Knight - doing so can change the course of the entire game.

The most expensive unit in the entire game, as well as the only one that costs 10 elite points. This is, basically, a mobile fortress, capable of dealing immense damage and being almost impossible to take down. Solaria is more efficient at dealing damage than Paladin, mainly due to two special abilities. The first one allows her to deal heavy damage to all units standing in front of her, whereas the second one allows Solaria to fire 6 powerful rockets into 6 specified places. The second ability, when used right, can take out the entire enemy army in seconds.

What is more, Solaria has a passive ability that causes the unit to overheat when using abilities and attacking. Ponce it happens, Imperial Knight Solaria will move slower, but her attacks will be altered and will simply deal more damage. This unit is extremely expensive and can cost you the entire game, but her presence on the battlefield can turn the tides of even the most helpless situations.