The stages of escalation in Warhammer 40,000: Dawn of War III can be compared to the terminology found in MOBA - early, mid, and late game games. It's just the time frame of the match, which in different ways affect how the gameplay will look like, how much raw materials will be owned by the players, and so on. The game has four phases of escalation, numbered with Roman numerals - I, II, III and IV. Each match starts in the first (I) stage, and after ten minutes of gameplay it transitions to the second (II). For the next ten minutes comes the third (III) stage, and when exceeding 30 minutes of the game comes the fourth (IV) and the last stage.

You can check the stage of escalation in the upper right corner of the screen. When you hover the mouse over it, you will see the exact graph that this phase offers. 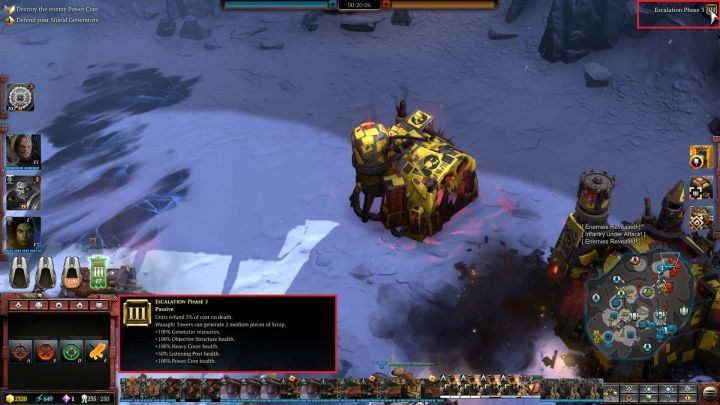 You can view the stage of escalation in the upper right corner of the screen.

What do the stages of escalation give? Each one has different characteristics and it looks like this:

As you can see, each stage looks different - during I stage, losing a unit is much more significant, because generators give less income. In later stages there are more resources making unit loss less painful. Defensive structures also get more health points because each player will have just a bigger and stronger army.

Additionally, the escalation stages affect the Ork gameplay, as higher levels generate more and/or better scrap by the Waaagh! towers. This is especially true for stages III and IV, where Orks will be able to build an army cheaper using medium / large scrap metal to set up mechanical units.