No matter how good a player you are, during combat, it's impossible not to lose units in squads or even entire squads - one properly used ability can kill even a few units at once. It is useful to know what to do when the enemy is decimating your units and their effectiveness will be significantly reduced.

All troops in the game, consisting of more than one unit, may decrease in numbers during the battle. When a squad loses health points, it will also systematically lose numbers. For example, a squad of Dire Avengers will have 6 units when in full force. But when troop's health drops to, for example, half, it will only count 3 units, so its combat effectiveness drops by half. The situation looks the same for each squad in the game, which has at least 2 units. 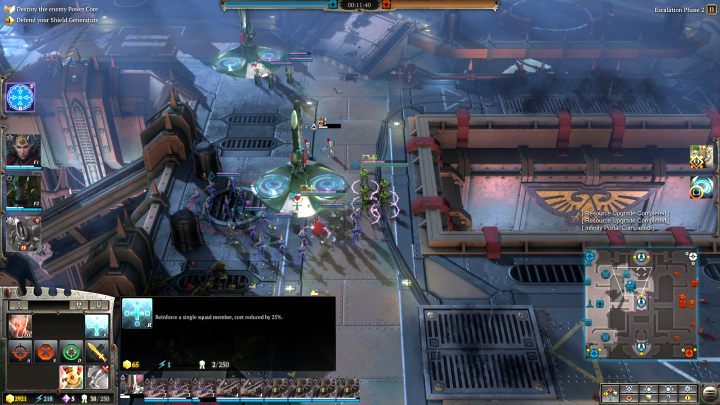 To restore the squad's full strength, you must use the Reinforce mechanism. It is available when you select any unit, the numbers of which decreased - you will find it in the lower left corner of the screen, and this function is represented by a characteristic cross. However, you cannot make up for losses anywhere on the map, the squad must be near any allied building that serves to recruit units - any building will do the job, except for the building with improvements to the faction and Listening Posts. Several units in the game also offer this feature.

When the troops are close to the desired object, you will need some resources. You have to pay for every character in the unit that is missing. Fortunately, this mechanism has a huge advantage - the recovery is 25% cheaper than it will cost to recruit the squad from the beginning. The cost of restoring a unit in a squad is the cost of that branch, divided by the number of units it contains, and then reduced by the already mentioned 25%. It looks like this:

Therefore, it is always better to replenish the units in the damaged squad than to lose it completely - this will save both raw materials and time, since replenishment takes less time than training.