Warhammer 40,000 Dawn of War III, similarly to the older Warcraft 3, introduces several types of armor and damage types to the gameplay, which greatly affect how units will receive damage from attacks and how this value can be reduced and increased. Understanding this mechanics is key to success, especially in multiplayer games. 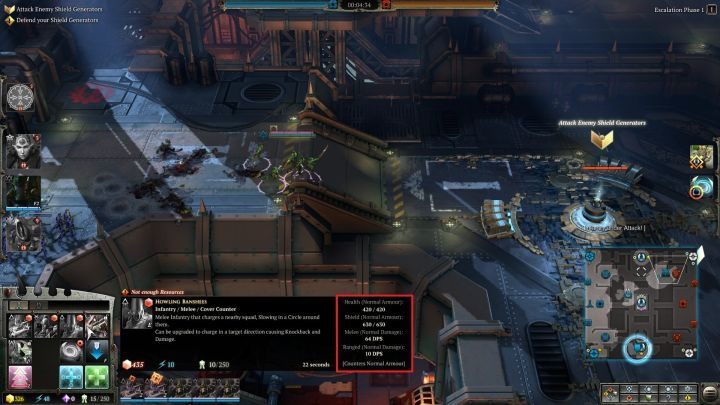 The type of unit armor and the damage it deals can be checked by hovering over the unit portrait.

Let's start with the armor. The game has two types - Normal armor and Heavy armor. Generally speaking, the majority of your infantry units (with the exception of a few, among other Nobz Ork faction), and a major part of the elite units are equipped with normal armor. The Heavy armor, though, is reserved primarily for more expensive vehicles and mechs such as Dreadnought, or Deff Dread. It might not seem logical that they do not directly affect the pace at which a given unit moves, but the amount of damage it will receive from individual attacks - just as in the aforementioned Warcraft 3. The type of armor can be checked by clicking on any unit - information about your armor will be displayed in the right corner of the unit window.

Moreover, units in the game can deal one of three types of damage - Normal, Armor-piercing and True Damage. They affect how much damage a given unit receives and how effective it will be in the fight against a given type of enemy units. Particular units deal following types of damage:

When creating an army, you need to take into account also the enemy troops in order to pick up the appropriate units and be able to effectively control them. Try not to recruit such units that will receive huge damage from enemy troops. It is impossible, of course, to plan everything, but you just need to know which units to direct against which.