In Warhammer 40,000 Dawn of War III there are three different resources available to the player - Requisition, Power and Elite Points. Similarly to the previous installments of the franchise, those are gathered by taking control over resource points scattered around the whole map - doing so will increase your income per minute of a given resource type. In Dawn of War III, however, capturing point won't be enough to give you additional resources - this will only give you control over the point. To get any benefits of it, you must construct Generators on top of it. 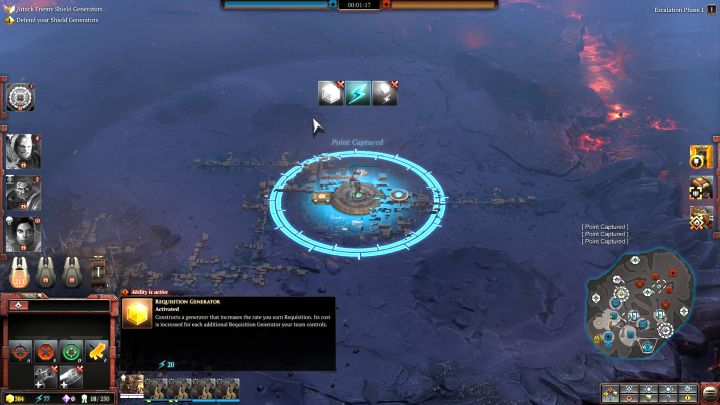 Resource gain can be increased by constructing Generators on top of resource points.

Those are special buildings that can be placed on top of resource points, provided that a specific resource point has free room for any of those. Each resource point has special "sockets" attached to them and each of them can have one of the three colors - yellow (Requisition), blue (Energy) and purple (Elite Points). You can place different generators on top of each of those - a Retribution-generating on top of a yellow one, Power-generating on top of a blue one and one that will increase Elite Points gain on a purple. Finally, each resource point can have from 1 to 4 of those sockets - the number of them, as well as their types, can be checked, above all else, by looking on the mini-map.

Finally, there are some things about resource points that you should always keep in mind, such as: