The sixteenth mission in the single player campaign, during which you'll alternate between all three factions. Your enemies are the servants of Chaos and not another playable faction as it happened before. 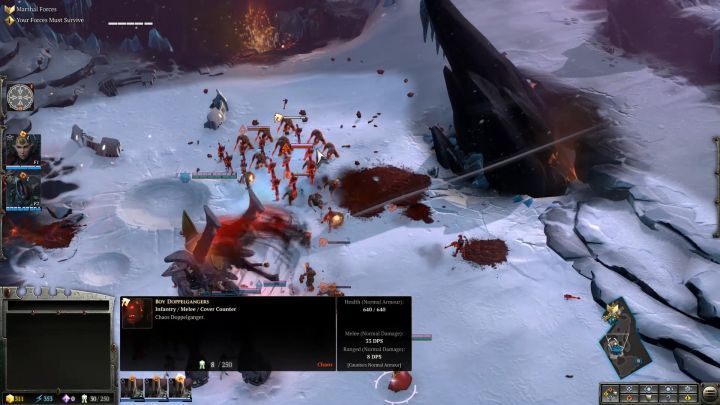 During this mission you will meet a new kind of enemies.

You start the mission by controlling the Eldar faction. At the beginning you will have 3 Howling Banshee units, Macha, and the Wraithknight Taldeer. Your goal is to get to the Northern part of this map, destroying hordes of Chaos troops on the way. Opponents you face here are a copy of the soldiers, which can usually be found in the armed factions - are no different in any significant way. Fight your way through the enemy forces until you reach the checkpoint. 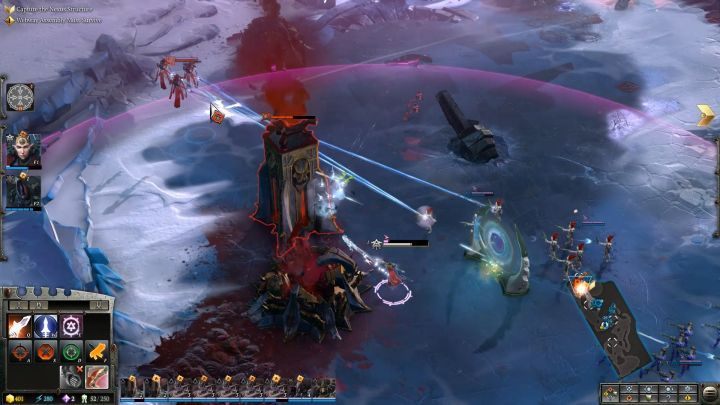 You just need to kill all the enemies.

Upon reaching the point, you will receive new tasks, as well as the access to the Eldar base. In addition, your army will be joined by several units. You don't have to develop your army - there are more than enough forces to perform this task. You have to head to the new marker, destroying enemy units along the way. Once you are in place, you just need to kill all units and destroy all enemy buildings. This will initiate a cutscene, and you will get control over the Orks faction. 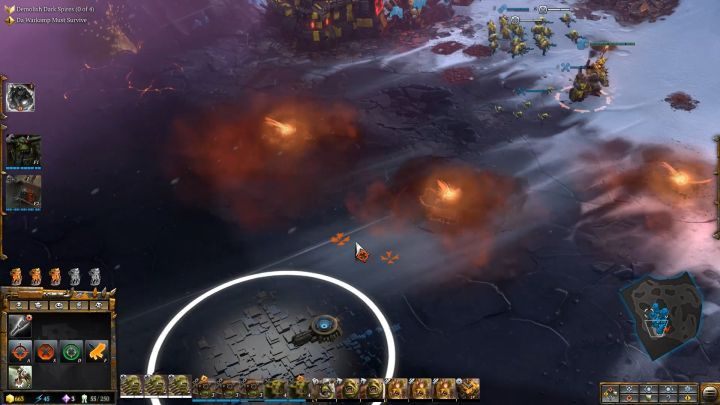 Be careful not to climb into the fire whirlwinds.

As soon as you get control of the Orks, pay attention to the raging fire whirlwinds nearby - any unit that enters it will take damage, so it is better to avoid them. Send any unit to take a resource point South of the base, and start recruiting additional units. Your goal is to destroy the 4 Dark Spires that are scattered on the map. 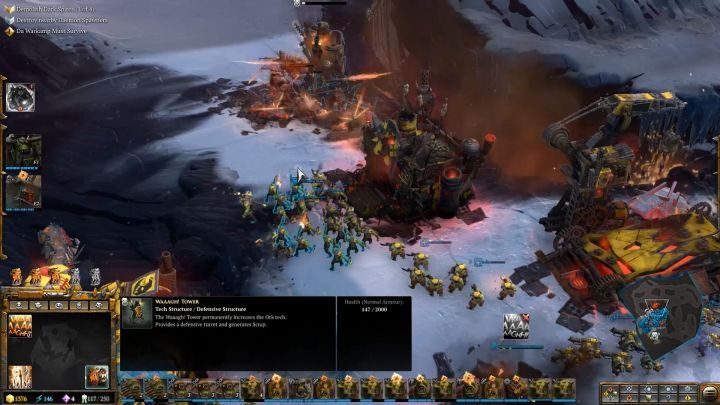 Destroying each Spire will result in an enemy a counterattack.

The first spire is located west of your base - send troops there to kill the enemies guarding them and destroy all the buildings. Remember, however, that the destruction of each of the Spires brings a sudden enemy counterattack, which comes from several directions. Then destroy the spire and quickly return to the base to protect it. 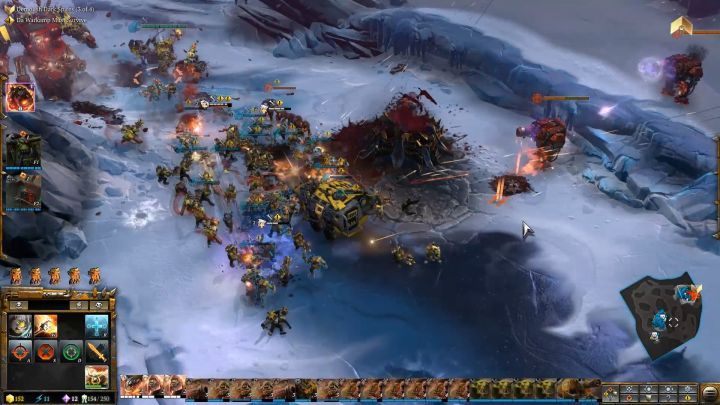 It's time for the last spire.

Now you have two options to choose from - send the whole army to attack and then retreat to the base when the enemy starts the attack, or divide it into two groups and leave part of the troops at the base. The first way is better, and that's what we'll stick to here. Return to the base, restore the troops and send them to any of the other three places where you will find the Spires. After destroying them, immediately return to base. Repel the counterattack and send troops to the next spire. Repeat the action until all 4 Spires fall to the ground and you complete this task and the action moves to the Space Marines. 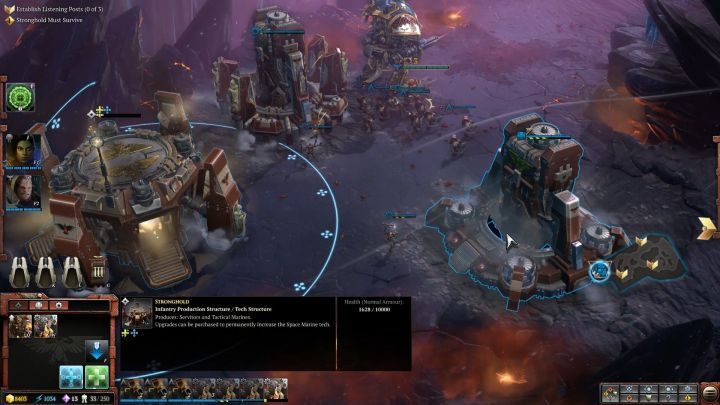 Use a powerful supply of resources to expand the base and train troops.

This is the hardest part of this mission because you will face absurd amounts of enemy troops. The advantage, however, is that in the beginning you will have a huge supply of resources that will allow you to recruit a huge army. Recruit some more Servitors together with Builders and erect the missing buildings. Then start recruiting units - it is worth investing in Tactical Marines with Heavy Bolters and Lasers, as both of these units will perfectly cope with the dizzying amount of cannon fodder that will rush on them during this stage. The main building should be fixed too because it is in critical condition. 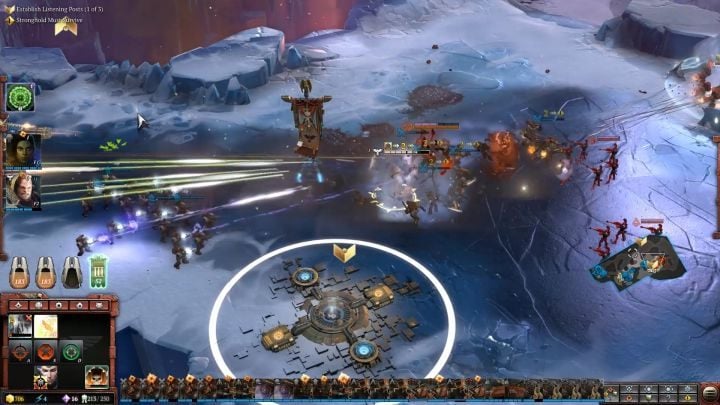 The second of the three resource points.

When you train enough units (i.e. use all resources), head East, to the first marker. Clear the area from enemies and capture the point. Then send the Server there and set up the Listening Point. Leave several units here (best 1-2 Assault Marines and a few Ranged Combat units) and dispatch the rest of the forces towards the next point you will find to the East. Capture it and set up another Listening Post. Divide the remaining army into two parts - in one let there be Gabriel Angelos, the Imperial Knight Solaria, and 2-3 groups fighting at a distance. Send Gabriel's group to the resource point located in the North. Leave the rest of the unit by the other point defended it. Capture the third point, set up the Listening Point, and after a while the cutscene will start, after which you'll receive a new task. 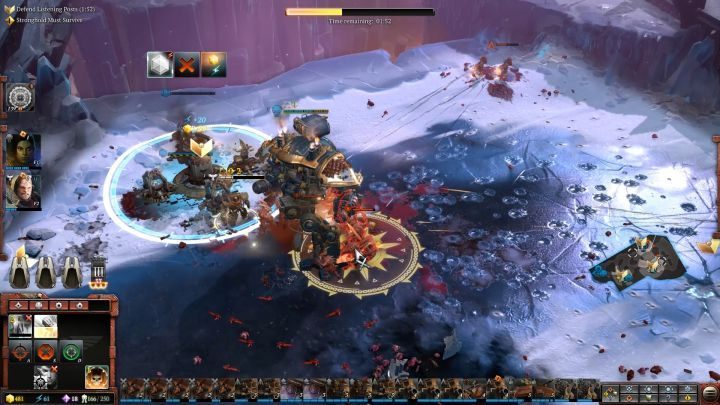 At any cost, you need to protect all 3 posts!

Your goal is to protect the Listening Posts that have been set on the resource points. You have to keep doing this for 5 minutes. There is one but - when the enemy destroys any site, the countdown will stop. You can resume it by restoring the post. To make it easier, it is necessary to appropriately divide the forces between the three points:

When the countdown is over, an absurd number of opponents will appear on the battlefield. Don't worry though, because it's normal and they can be defeated. After some time, a cutscene will begin, after which the mission will end.