The fifteenth mission within the single player campaign, during which you will again lead the Ork faction. This is the last mission in which you will control only one faction. You will fight here against the forces of Space Marines and Orks, you will get access to a powerful Ork unit. 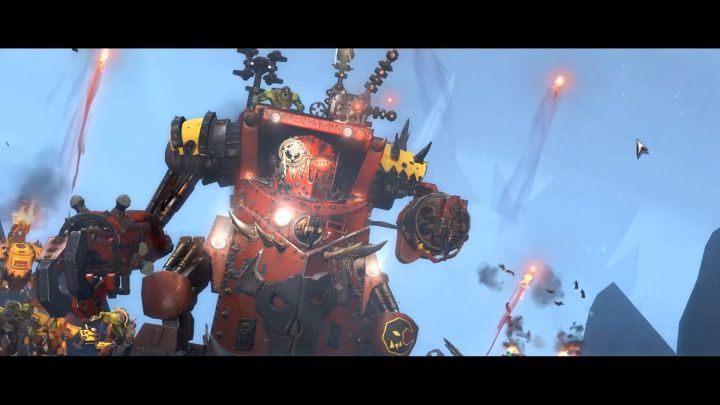 Beauty in all its glory.

At the beginning of the mission you will get control of a small group of orcs, which will also include Gorgutz and a new elite unit - Beauty da Morkanaut. It is a powerful Ork walker, which does not cause as much damage as the Imperial knight Solaria or the Taldeer Wraithknight but perfectly plays the role of the tank and support hybrid. It is almost impossible to destroy it, as it can summon Gretchins who will quickly fix it. Beauty's abilities can decimate enemy ranks. The above-mentioned Gretchin mechanics allow you to summon up to 4 Gretchins. Rokkit Fist allows you to shoot the robot's fist, which can then be brought back, pulling all units, allies and hostile, towards Beauty. Kustom Force Field, in turn, protects Beauty from enemy shots and deals damage. 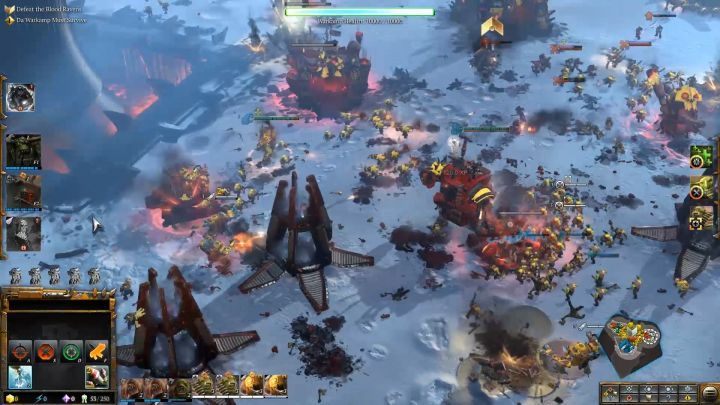 At the beginning of the mission you have to defend the Ork base.

Send your troops North to destroy the Space Marines units attacking the Ork base. Once you kill them all, there will be a cutscene, after which you will have the base that you just defended, and you will get a new task. 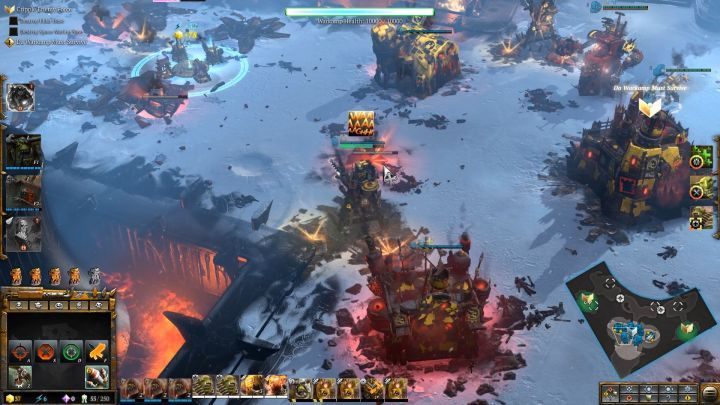 Start with expanding the base - first erect the missing Waaagh! towers to unlock access to the rest of the units and technologies. Then train a few extra units, preferably Boyz and Tankbustas and use the scattered scrap metal within the base small to upgrade the units, and medium and large to train additional troops. Also remember to refill the missing units in the units that fought before. 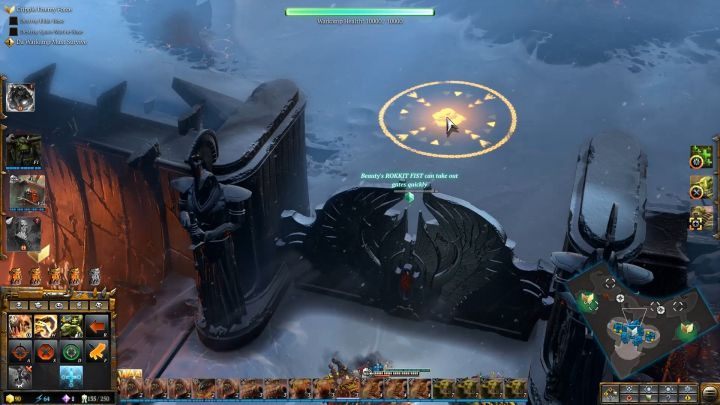 The Rokkit Fist is also used to destroy these types of gates.

When you're ready, head North, destroy the gate blocking the passage using the Rokkit Fist ability. Join the fight between Space Marines and Eldar to kill all enemy units. Then head East, towards the resource point killing all enemy units there. However, it is impossible to build generators here - you can (and should!) to build a listening post. A good option is to build a Waaagh! Tower here. However, if you already have a maximum of 5, select any of them and destroy it using the option available at the bottom left of the screen. 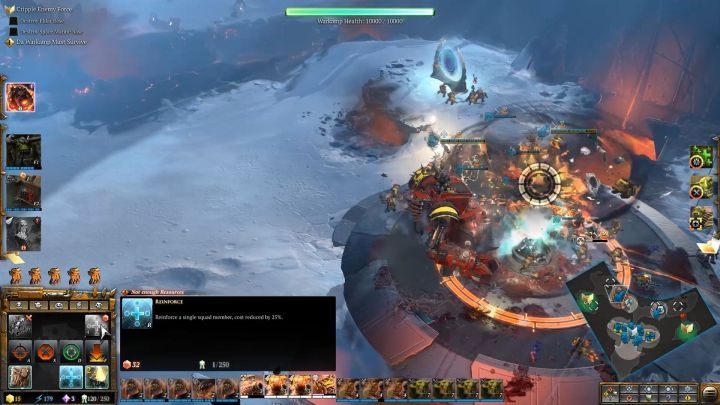 These points will not allow you to build generators, but the Listening Post will slow down the enemy units in case of an attack.

Let's go now in the opposite direction, to the West, to the next resource point. Capture it and kill all the nearby enemies. Here, too, it is impossible to set up the generators, but you should erect another Listening Post and a Waagh! Tower. Do not venture to the Eldar base, though - retreat to the base and restore you strength, training new units. 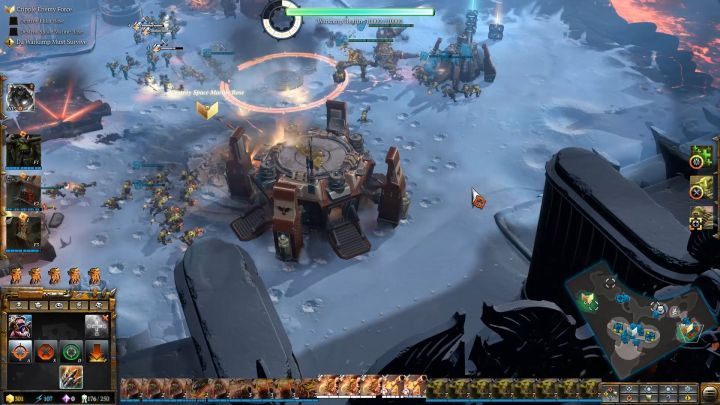 The Space Marinces base is much easier to capture than the Eldar base.

When you're ready, go East to the Space Marines base - it's much easier to capture than the Eldar base. Defeat a few small enemy units, and when you get to the place indicated by the marker, use the Roks' special ability. Located in the center of the Space Marines base, after a few seconds will destroy almost everything from the surface of the planet, leaving a individual units alive. Now finish off the survivors and destroy the buildings. As soon as you do that, a new piece of the map will open up for you and you will receive a new task. 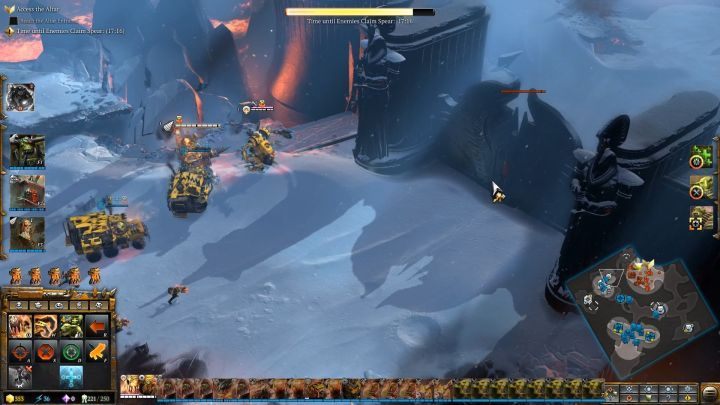 The entrance to the altar is blocked by a closed gate, which you will destroy with a Rokkit Fist.

However, before you start it, it is necessary to return to the base and train units, of course, if you have enough resources. Then go in any direction - East, over the Space Marines base or West, over the Eldar base and head towards the marker on the map. Once you get there, a cutscene will be initiated, and afterwards, there will be two targets to eliminate: Imperial Knight and Wraithknight. 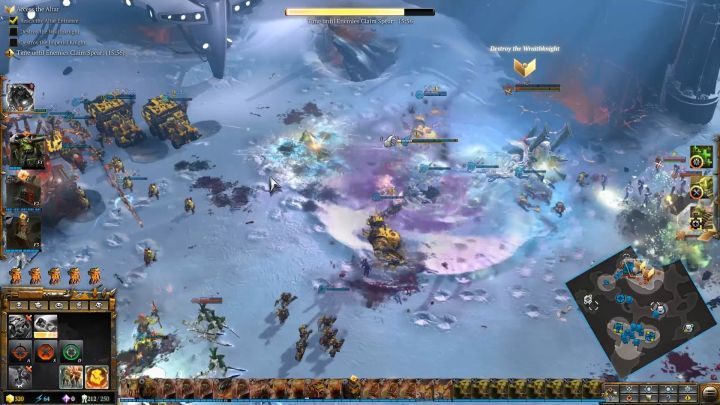 The knights pose no threat.

Depending on from which direction you come here, you will fight with them in different order. However, it does not matter much, because the fight against them will be very simple. The reason is simple - there are no enemy units apart from the aforementioned knights, while you at this point have a lot of units. Focus your firepower on one knight, engaging him in close combat with the help of Gorgutz and/or Beauty, and once you kill one, give the order to attack the other. When the two knights fall, the cutscene will begin, after which the mission will end.