The thirteenth mission of the single player campaign, during which you will lead the Eldar faction. During this mission, you will fight exclusively against the Eldar forces, and your goal is to activate the elite unit. 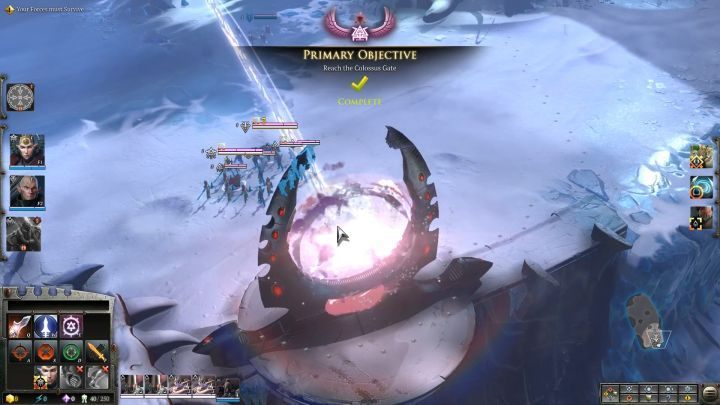 Initially your only goal is to get to the gate.

In the beginning of the mission you will get access to the two elite units - Macha and Ronahn - and two units of Howling Banshees, two Grim Avengers units, and one Dark Reapers unit. Your goal is very simple - you just need to get to the marker located in the southern part of the map. There is no enemy here, so send troops there to trigger the cutscene and get a new target. 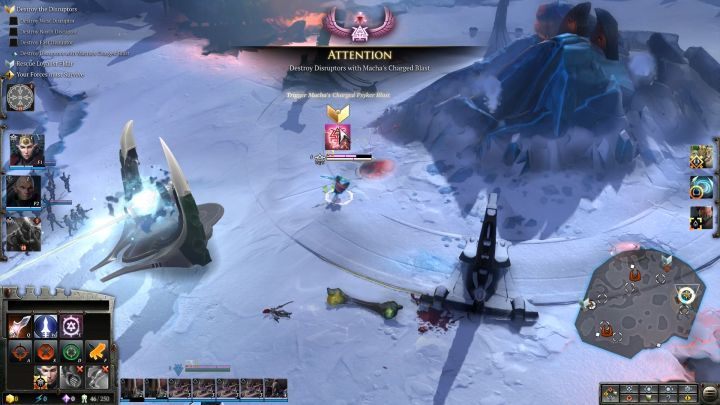 Your new goal is to destroy three Disruptors. First of all, send troops to the East to destroy the enemy forces there. When you get there, you'll also get a side mission that will require the rescue of Eldar troops - more on that later. Direct units to the nearest mission marker. Clear the vicinity from the enemies and then try to attack the Disruptor. You will not be able to destroy it this way, however, a message will appear on the screen to send Macha to the specified location. Do this and then activate the special ability by clicking on the icon above the heroine's head. 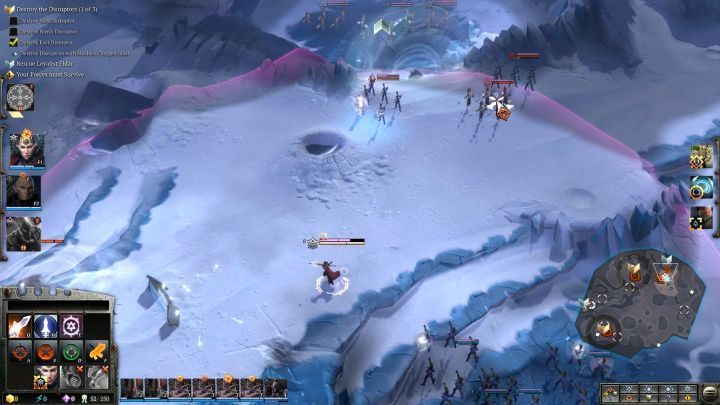 The first group of troops that can be saved.

One Disruptor destroyed, however, ignore the other ones for the moment. Go North, towards the silver marker, which I indicate the position of the Eldar troops that you can save. Deal with the opponents, and then break the barrier that binds them. After that, you will be joined by a few more units. 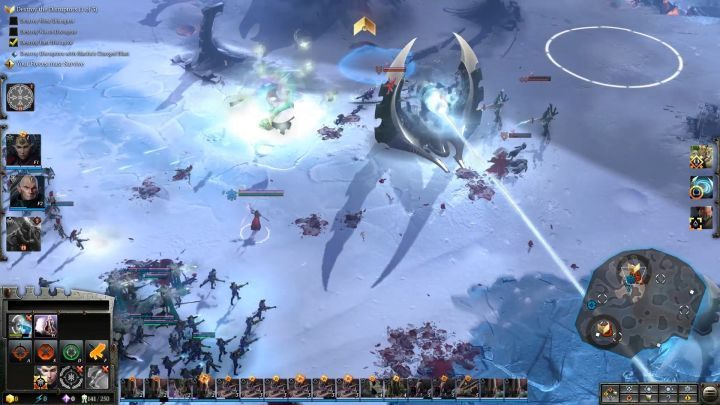 Now head towards the center of the map. From here, head to the second silver marker, which you will find on the Western edge of the map. Again, you need to knock out all the enemies there, then break the barrier to free the troops. Now head towards another Disruptor, which can be found in the Northern part of the map. Kill the enemies and then send Masha to the specified place to activate her special ability again. This initiates a cutscene.

Send a Builder to start repairing the generator.

After regaining control of the troops, you will get a new target to activate the Wraithknight. To do this, you need to repair four generators with the help of Eldar builders - the Bonesingers. Send one Builder to the generator indicated the marker to start the repair. Unfortunately, you can only repair one generator at a time. Overwatch the whole process, and when the repair is over, send the Builder to do the next generator. 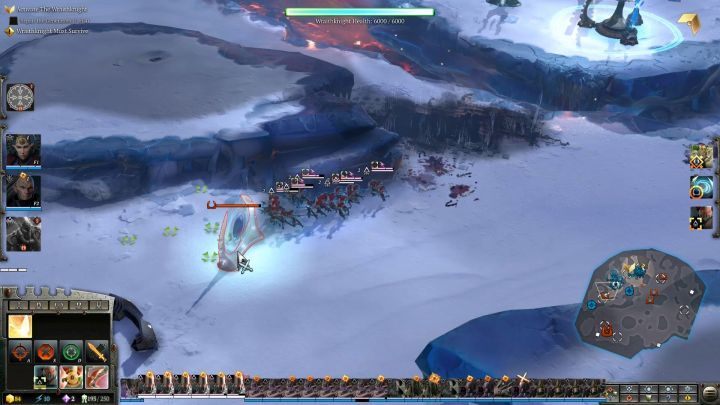 It is necessary to send Howling Banshees to destroy the Webway Gates, which will summon the enemy reinforcements.

While the Generators are being repaired, your base is be attacked by Eldar forces. Troops arrive from the nearby Webway Gate. First, replenish your troops. Then divide the army into two parts - one comprising the Howling Banshee and the other with everything else. Use the second group to repel enemy attacks, and dispatch the Howling Banshees to destroy the above-mentioned Webway Gate. When you destroy it, the enemy will not be able to call for reinforcements for several dozen seconds. After about a minute there will be a new gate, which again will need to be destroyed. Thus it'll make your job easier because the enemy's attacks will be much less severe.

After the repair of the two generators, a group of enemies will attack from the south. Among the opponents, there is the Wraithlord. It's a powerful melee unit that, if you don't stop it, will decimate your army. Send your elite troops and Howling Banshees to fight it. Keep the ranged combat units at a distance. Concentrated fire on the enemy will kill him in a few seconds. Then focus on protecting the base, and once all the generators are repaired, another cutscene will begin.

Use the Wraithknight's Shield to Reflect the Beam 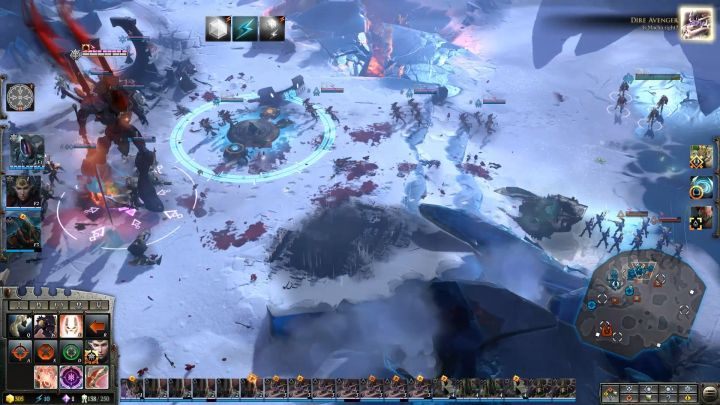 When the generators are fixed, the army will be joined by a powerful elite unit, the Wraithknight.

After the cutscene a new elite unit (the Wraithknight) will join your army replacing Ronahn. This is the most powerful Eldar unit, a very strong and reliable walker machine which has no equal in melee combat. It alone is able to destroy medium sized enemy army. You will also get a new task-to reflect the beam with the shield of the above-mentioned elite unit. 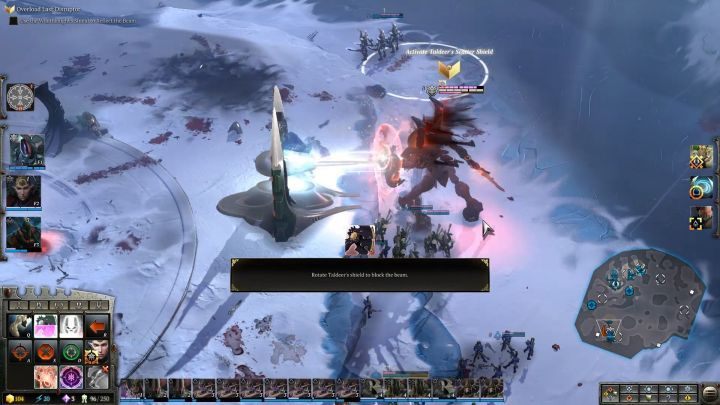 Place the disc in the direction of the beam.

Send your units to the last device that interferes in the southwest corner of the map. Clear the area and then send Taldeer to the specified location. Now it is enough to activate the Scatter Shield set its direction in the direction of the laser beam. After some time, the device will explode, and you will get the last task. 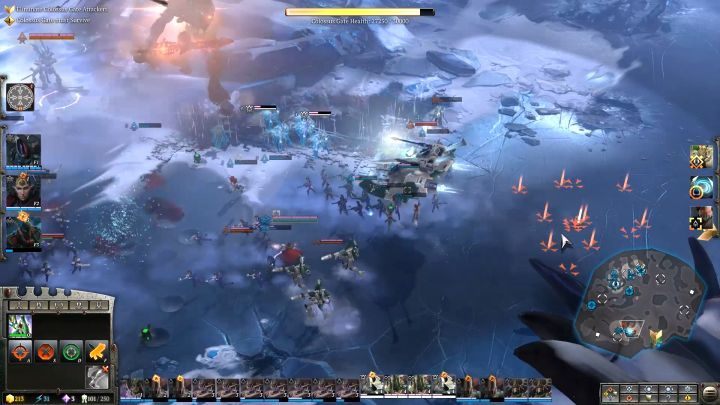 Before reaching the gate, you will fight a large group of enemies.

You need to knock out all the enemies attacking Colossus Gate - the same through which your troops passed at the beginning of the mission. Send all troops towards the marker on the map, but don't hurry too much, because along the way you will find a lot of enemies, and to reach and clean the surrounding area you have approximately 5 minutes. Kill the enemies, then go to the gate and eliminate opponents there. Once you do that, the next scene will start and the mission will be over.