The eleventh mission of the single player campaign, during which you will lead the Eldar faction. During this mission, you will fight the forces of the same faction, the Eldar, and will not have access to the base. 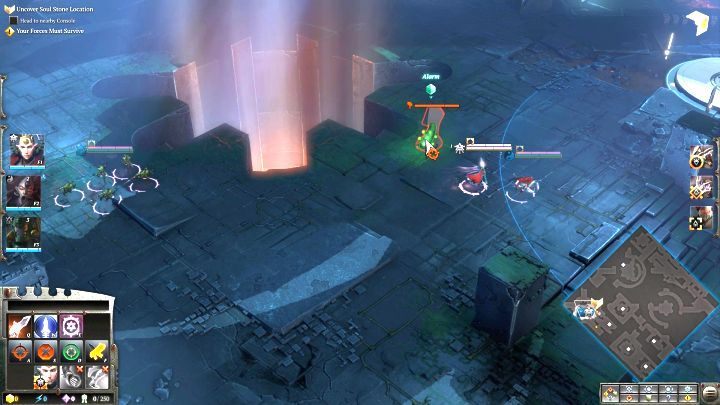 Alarm consoles can be used to redirect the enemy attention.

At the beginning of the mission you will have access to three elite units - Macha, Jain Zara, and Striking Scorpions. You must access the specified console marked on the map. Don't pay attention to patrolling the enemy perimeter, as long as you interact with the consoles, they will ignore you. When approaching the console, you encounter an alarm terminal - attacking it will cause enemies rushing towards it. 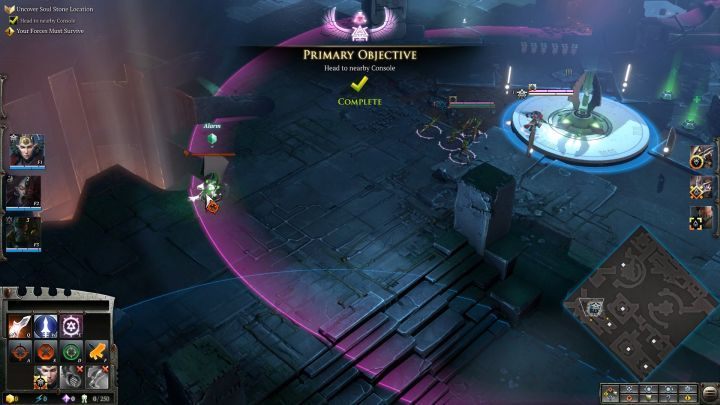 Attack the console to attract the attention of the guards.

Now go to the indicated terminal, but do not go into the circle surrounding it - when you see the guard, the alarm will be triggered. Wait until the enemies are behind and then dispatch any unit near the console. Simultaneously attack, with the help of Macha's Singing Spear nearby the alarm terminal. This will make enemies stand next to it, giving you enough time to activate the console. 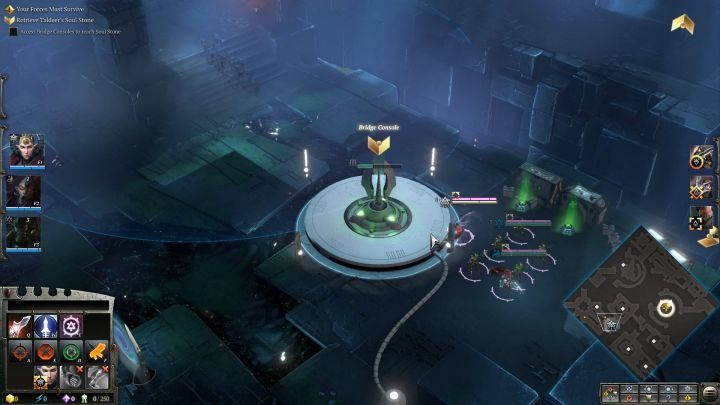 After interacting with the console, you will get a new goal, to retrieve Taldeer's Soul Stone. Head Southeast, where you'll find another console that you need to interact with. Wait until the enemies patrolling the neighborhood are behind and dispatch any unit near the console. If you see that the unit will not have time to hack the system, because there's a patrol coming, leave the circle and wait for the enemy to pass. Then, repeat. After that, the bridge will open, which will allow you to move to the next stage. 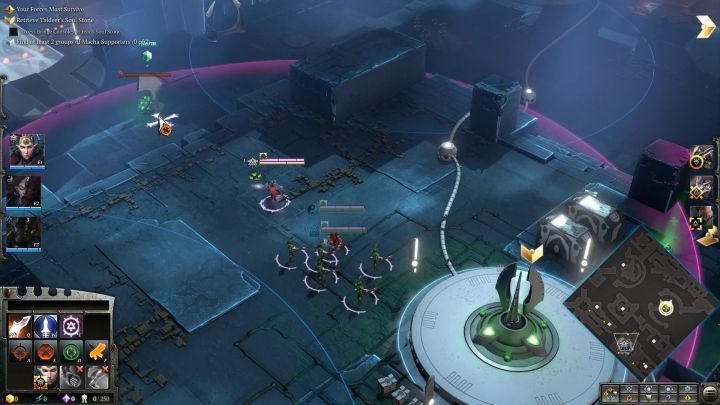 As soon as you get to the other side, you get a side mission - to find groups of people supporting Masha. You will get to them later. Approach the specified console, wait for the enemies to pass, and use the ability of the Singing Spear again to attack the alarm terminal. Then dispatch any unit to the console to hack it. 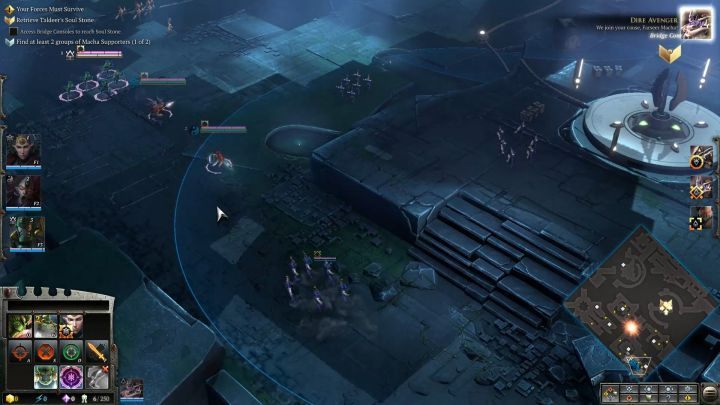 One of the first additional units.

Go to the next console, located in the southern corner of the map. Upon reaching the spot, you will be joined by Dire Avengers - this is one of the units supporting you and is associated with a side mission. Go to the console and again use the ability of Macha's Singing Spear to attack the terminal located to the East of the alarm console. When the enemies go in his direction, set the unit by the console to interact with it. 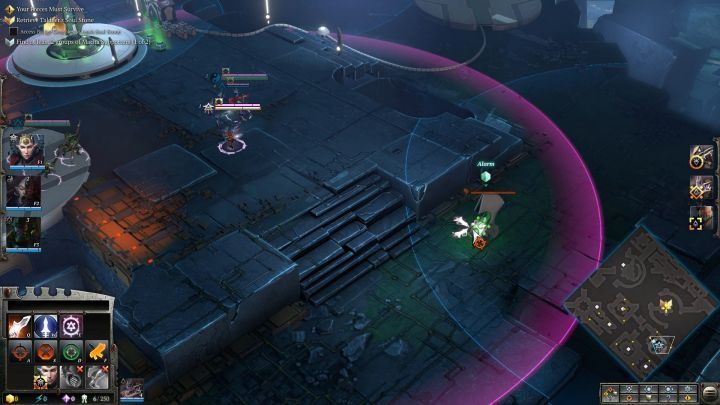 Direct the troops North to the next console. Do the same as before - attack the alarm terminal, and during the turmoil interact with the console. Approach the newly opened bridge, which you will find to the North. You will be joined by two Howling Banshee squads. Don't cross the bridge yet, though. Instead, send troops Northwest to the terminal. 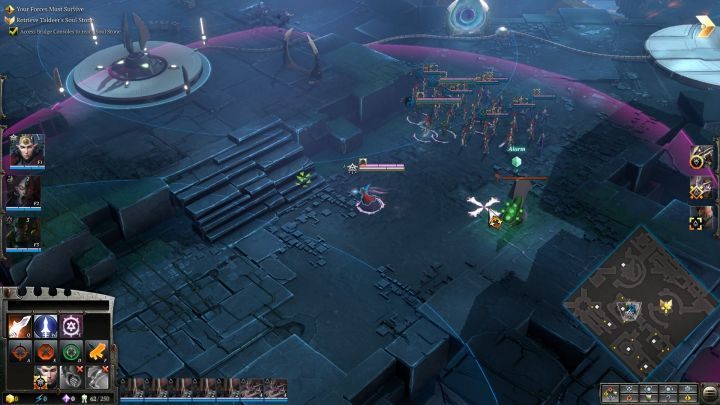 The sixth and the last console to be activated.

You will encounter two more Howling Banshees units on the way. Go to the new console and attack the alarm terminal to attract the attention of enemies. Then hack the aforementioned terminal to open a new path to completing the mission. Near this terminal, slightly to the North, you will find two more units that will join you - Howling Banshees and Dire Avengers. Now send all your troops towards the golden marker on the map to trigger the cutscene and get a new target.

Escape with the Soul Stone 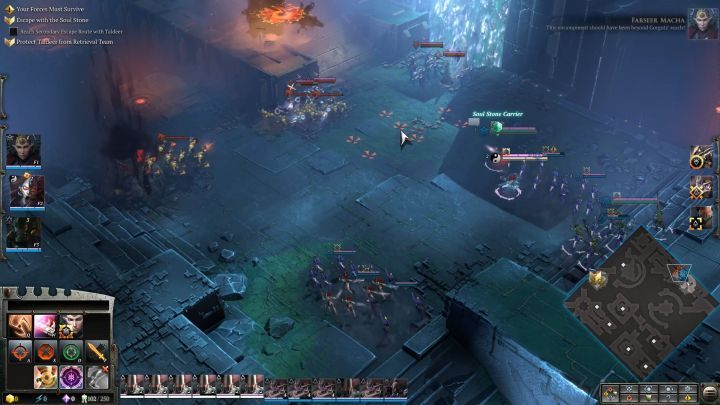 Now you will find quite a long crossing through the enemy troops.

Once you regain control, ignore nearby enemies and send units North. You have to follow from one marker to another, eliminating enemies along the way and controlling them so that they cannot kill Macha. From time to time you will be joined by additional units. Also remember to use first aid kits scattered everywhere to restore your troops' health. Go all the time in the direction of the gold marker - there are no side quests. Once you get to the place, the mission is over.