The ninth mission of the single player campaign, during which you will lead the Eldar faction. This is one of the longest and hardest missions in the entire campaign. You will fight against the Ork forces. 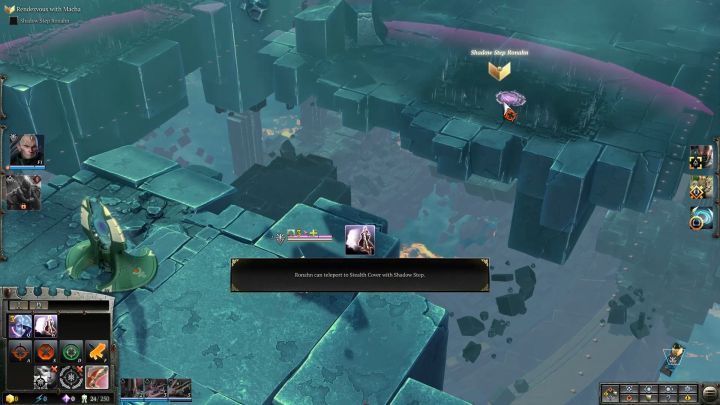 Use a Step through the shadows to teleport Ronahn to the other side.

At the beginning of the mission, you will gain control over several Eldar units, but do not pay attention to them, because at the moment the most important is the elite unit - Ronahn. This is an elite Eldar sniper unit. It has two special skills. Far shot allows you to take a shot that will cross the entire map (!) injuring units on its way. What's more, the bullet gives vision, so it's great for reconnaissance. The second ability called Shadow Step allows him to teleport to the shadows (shadow cover) in the area of effect. Use this ability to get to the place indicated by the marker. 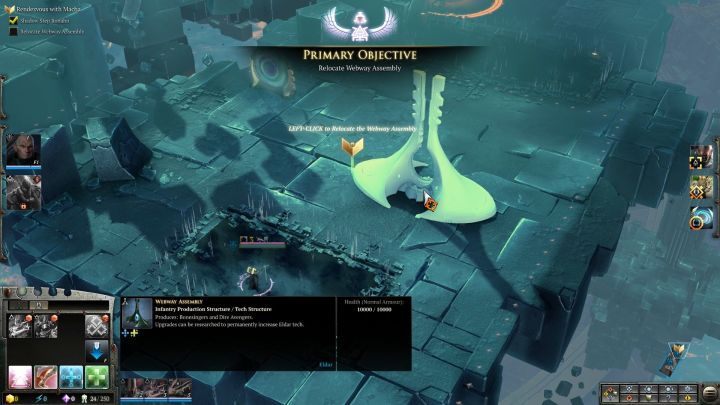 You will be able to use the relocation on several ocasions.

Once you are on the other side, you will receive a new order - transfer Webway Assembly, Eldar Headquarters. Select that building and use the Relocate option to move the structure to the specified location. When the process is complete, select the building again, activate the Connect Webways ability and select the Warrior Portal. A portal between buildings will be created. Send the remaining units to the warrior portal. After they teleport, move the building next to the main building of the Eldar. After that, you will receive a new mission. 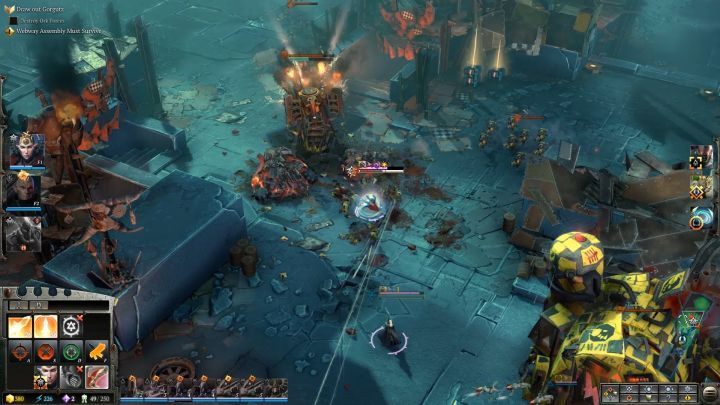 You have to destroy all the Ork forces in the vicinity.

Your goal is simple - you need to destroy all the Ork forces. Prepare additional units, preferably Rangers and send them to the nearest resource point. Take it, build over, and send troops to the North, eliminating all enemy forces on the way. 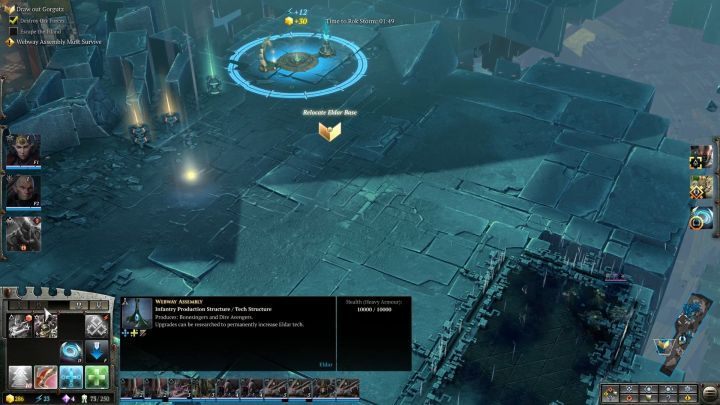 After you defeat all enemy units and destroy all the buildings on the screen a countdown will initiate. You have less than 2 minutes to move all your buildings (except the ones you've put on resource points), along with your units, to a new spot because the area you're on will soon be bombed. Send any building to the specified location , then connect it (by combining paths) with another, which remained on the old base, and thus send all units to a new location. Then send all the buildings to the specified location. When the time runs out, the map will change significantly. 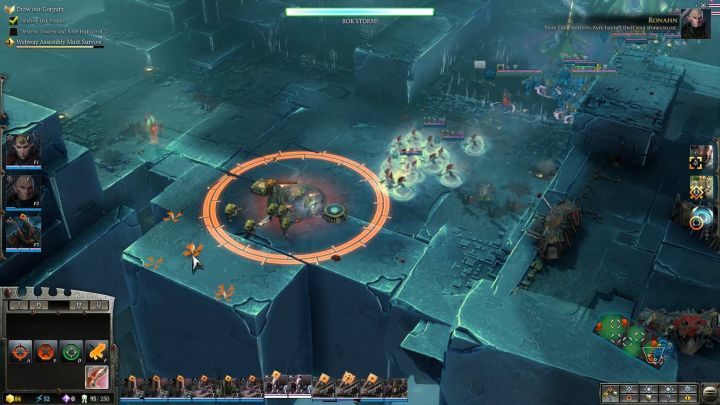 The first stone of souls can be found in the resources section.

Now you have to destroy 7 towers Waaagh! Tower and Boyz Hut. In any order, of course. First, take the nearest point of the resource. When you approach it, a new task will open up, requiring you to acquire 7 souls stones. You do not need to work hard to find them - most of them will be located by the enemy towers, you cannot miss any of them. Don't forget to just look in every place and you will collect all the stones. 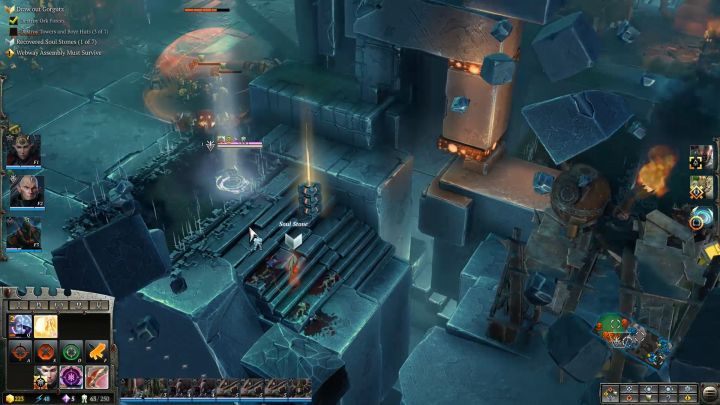 The second stone is not far from one of the enemy towers.

Take that point, take the stone and go to the next tower, destroying the fortifications and killing the enemy troops. Also remember to regularly expand your base and create new units. Don't forget about Ronahna's abilities, especially Shadow Step - you can teleport to any cover and attack the enemy from behind, or use this just for scouting. Before you destroy the last tower, try to collect all the stones - there are only 3 of them in this area (including the one you collected in the beginning). 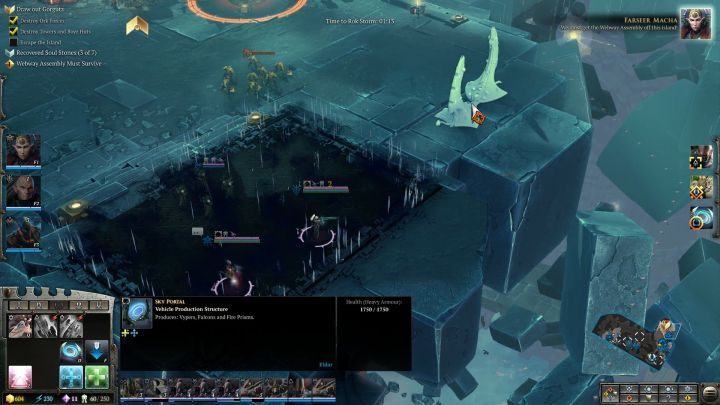 When all the enemy towers fall, another bombing will begin and you have to move the base once again. The new place is swarmed with the enemy forces, but do not fret - the enemy units there are not numerous. Rangers are hiding, so you can move into the Shadows with Ronahn to eliminate them easily. As before, move any building to a new location (you can install it in the shade), connect it by connecting paths to another one from the old base, move units to the new location, and then move all other buildings to the new location. 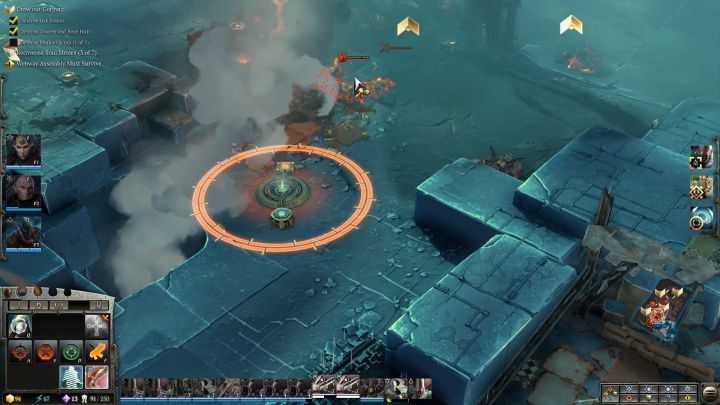 It's worth it to capture the point of resources.

Here your task will be to destroy 5 Scraps indicated by the markers. To attack such scrap, you need to select the units, press the A key, and specify the object you want to destroy. You can thus damage also Scrap metal that is not related to the job, reducing the efficiency of the Orks. The first Scrap to destroy can be found right next to your base. Destroy it, capture the resource point of and collect resources lying in the area. 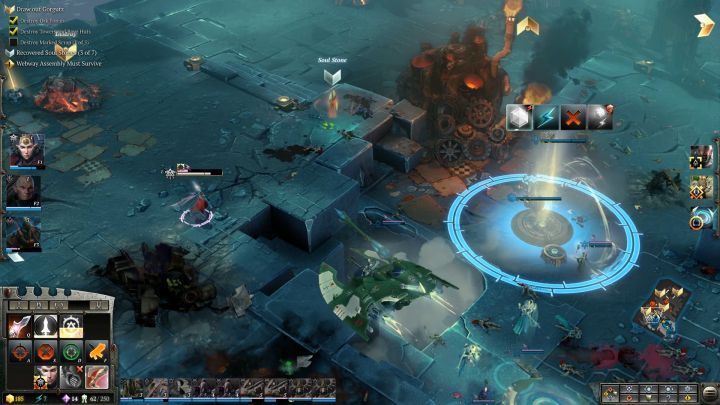 Restore the troops and replenish their shields. Make sure to recruit new ones. Then, head towards the nearby (Westward) resource point to capture it. Between this resource point and the nearby scrap to destroy, you will find the fourth soul stone. The fifth, in turn, is in the Western corner of the map. Gather them and continue you march. 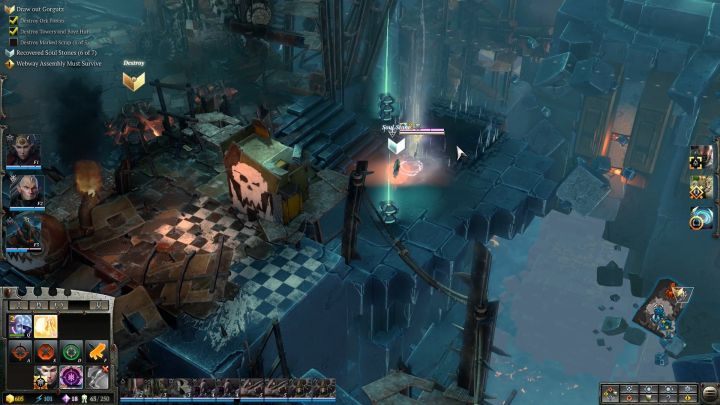 Destroy other Scraps and keep recruiting the new troops - these will come in handy soon. Before you destroy all Scraps, go to the North-Eastern corner of the map - there you will find the sixth soul stone. Once you destroy the last object, another escape sequence is activated. Go back to the base, move any building, connect it with another, connecting paths and teleport troops to a new location. After all, do not forget to move the rest of the buildings. When the bombardment is over, the map will change its appearance again. 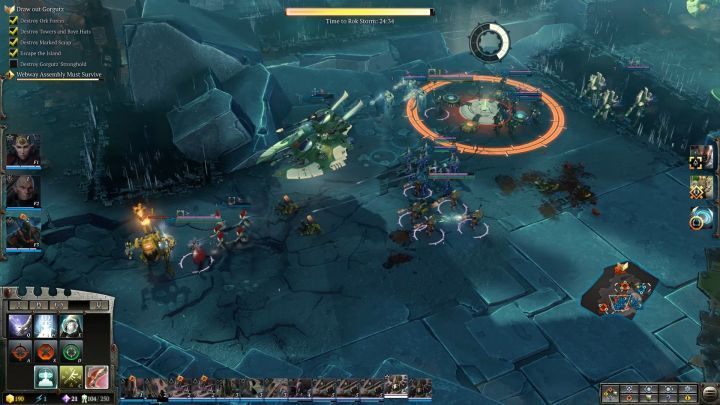 Take care of the resources located in the area.

You will get the last goal-to destroy the Gorgutz' fortress. Before that, however, do, collect the last soul stone that is in place of your new base. Then restore your strength by training new units. When you're ready, take action. You have to go to the Northern part of the map where you will find the mentioned Ork leader's fortress. Do not move there, however, directly - it is necessary to capture resource points and train additional troops. During the march, you will get the opportunity to summon the Eldricht Storm. This is a super Eldar skill that allows you to summon a devastating storm that wounds all enemy units within range. The storm can be controlled. You can also send a unit inside to alter its functions. 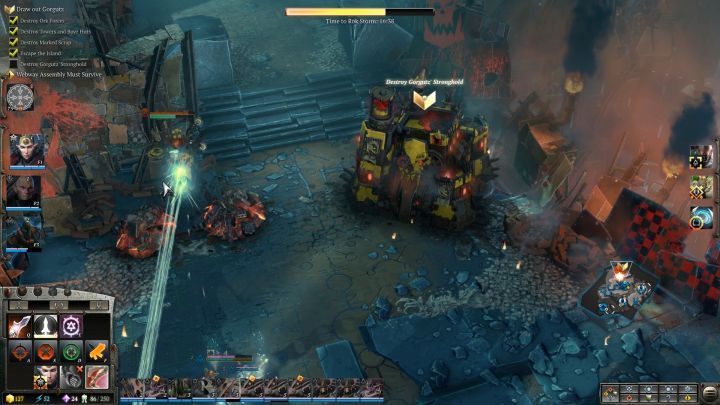 The destruction of the enemy fortress will complete the mission.

After a while, the next countdown will appear on the screen. You must complete your task within the specified time frame. Don't worry though, there's more than enough time. Quietly develop the army, and when you're ready, go to the enemy fortress. Once you destroy the enemy main building, the cutscene, and then the mission is over.