The seventh mission of the single-player campaign, during which you will once more control the Ork faction. During the mission you will be fighting both Space Marines and Imperial Guard units.

Blow up the Broadside Cannons 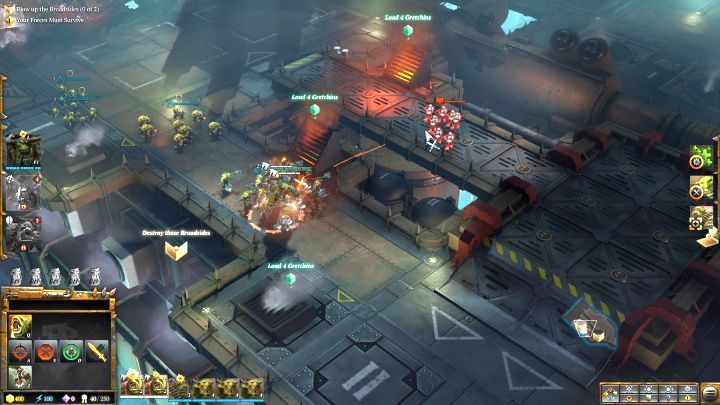 The beginning of the mission and first cannons to destroy.

At the beginning of the mission you will be given command over Gorgutz, two units of Boyz and 4 units of Gretchin. Your first objective is to destroy the broadside cannons. In order to do so, you must send Gretchin to the ventilation shafts indicated by the markers. Start by sending your forces downwards to eliminate all of the enemies stationed near the first four ventilation shafts. Once it's done, send your Gretchin to destroy those objects. 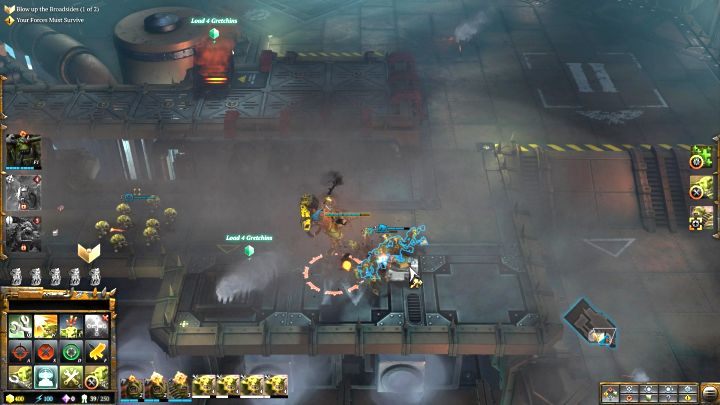 And here's the second set of broadside cannons.

Once the Gretchin are done with the cannons, they will leave ventilation shafts, but they will lose some of the units in their squads. Send your units towards the next set of broadside cannons, eliminate the enemies protecting them and send Gretchin to get rid of them as well. You now have destroyed all of the broadside cannons - the objective will be completed and you will be given another one.

Blow up the Deck Guns 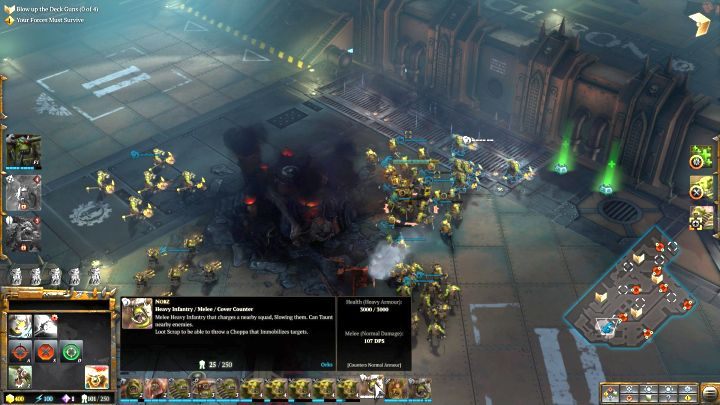 Reinforcements will be useful.

You will receive reinforcements - two units of Shoota Boyz, one Tankbusta and two units of Nobz. Tankbustas are ranged units, extremely effective against heavily-armored foes. Nobz are on the other hand one of the best melee units in the game - they have immense health pools, heavy armors and an ability that forces nearby enemies to attack them (Taunt). Once the reinforcements arrive, you will receive your new objective - to destroy the deck guns. 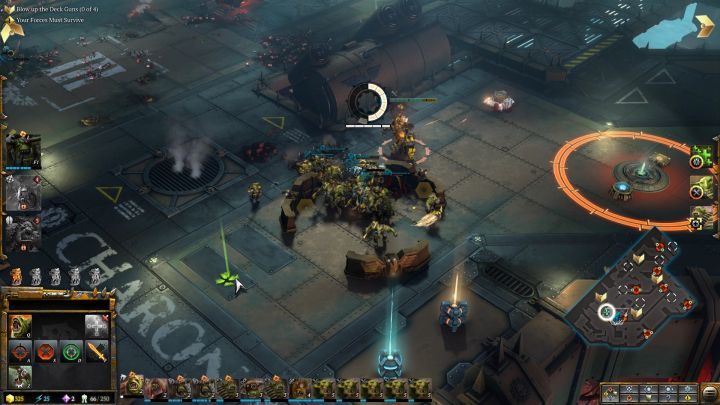 You now have to destroy four cannons, scattered around the entire map. First things first, send your units to the resource point located north of your current position. Capture it and build a Listening Post on top of it, as well as all of the available generators. If you have the resources, you should also build a Waaagh! Tower there - you can use one of the medium scraps located nearby. This will protect the resource point from small groups of enemies. Keep in mind that the Waaagh! Tower has an ability (WAAAAAGH!) that will increase the effectiveness of your units and heal them - the latter thanks to the presence of Gorgutz in your army. Finally, you can use nearby medium / large scrap to construct a Killa Kan unit. 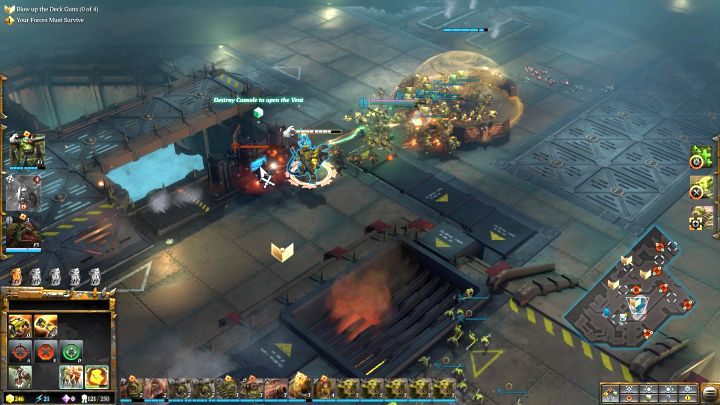 The first terminal associated with the deck guns.

Head towards the first cannon, located to the east of the resource point. Eliminate all of the enemies in the area and send Gretchin into the ventilation shaft located on the elevation. However, they won't be able to enter it and you will be given an objective to hack the nearby console. Send any unit to the mechanism - after a short while you will be able to attack the said console. Now you can send Gretchin inside to finally destroy the cannon. Once it's done, enemy reinforcements will arrive - use the heavy cover point to protect your ranged units and get rid of enemy forces. 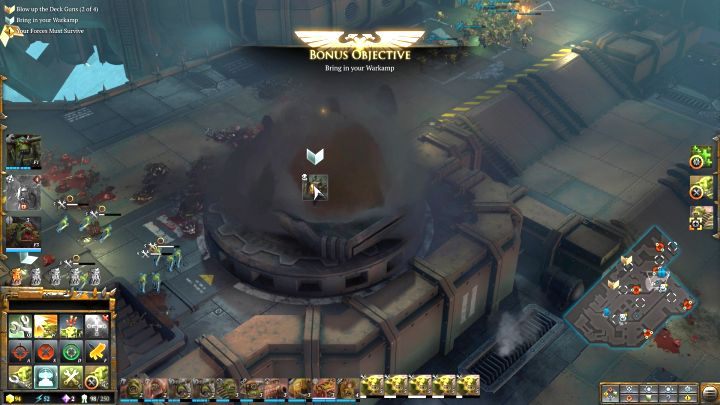 An option to create an Ork base.

Now send your units to the resource point located to the north-east of the destroyed cannon. Capture it, construct the necessary buildings and send your units to the nearby cannon. Eliminate the enemies located there, destroy the terminal and send Gretchin to destroy the cannon. The place where you've destroyed the second cannon can be used to construct a base. In order to do so, click on the icon located above the cannon wreckage and a new base will appear after a short while. 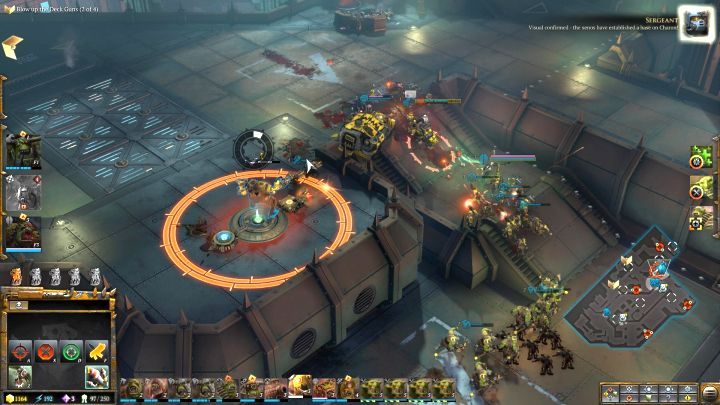 The third resource point to capture. 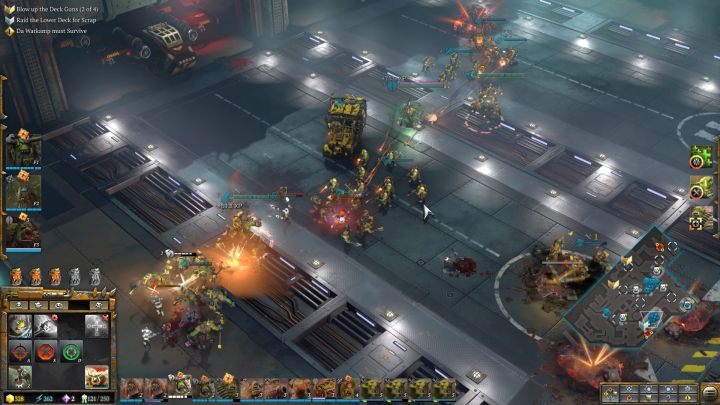 A side mission that will allow you to acquire quite a lot of scrap.

Move all of your troops towards the southern edge of the map, near the next resource point. You will receive a new objective - the task here is to raid the lower deck for scrap. You just need to eliminate all of the enemies in the area and collect all scrap (small, medium and large) to complete the mission. It's worth to complete this task, especially if you've constructed all of the Ork buildings - there's a lot of medium and large scrap there and it can be used to construct several Ork units. Clear out the area, capture the resource point, fortify it and send all of your units back to the base. 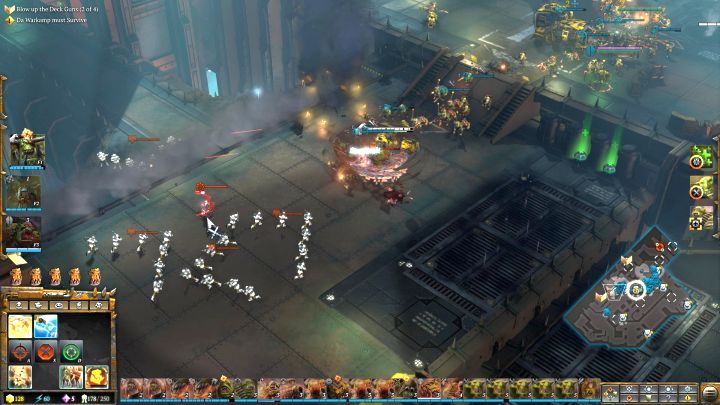 Another cannon to destroy.

Blow up the Nova Cannons 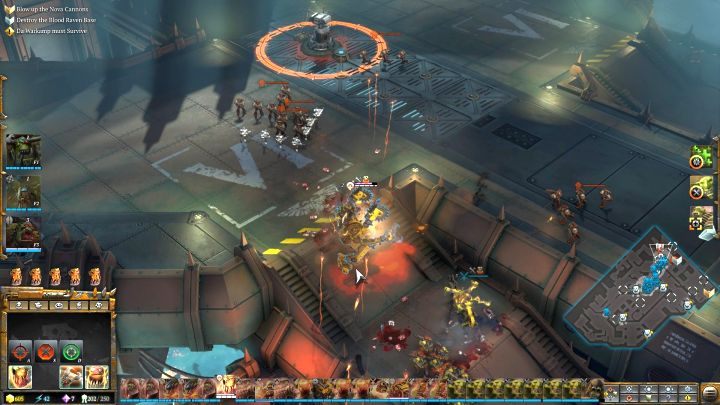 Destroying the Blood Raven base will allow you to complete a side mission.

First things first, recruit as many units as possible - if you still haven't reached the limit. Once you're ready, move your troops to the northern edge of the map, eliminate all of the enemies located there and capture the resource point. Afterwards, send your units east to destroy the Blood Ravens base - doing so will allow you to complete a side mission. 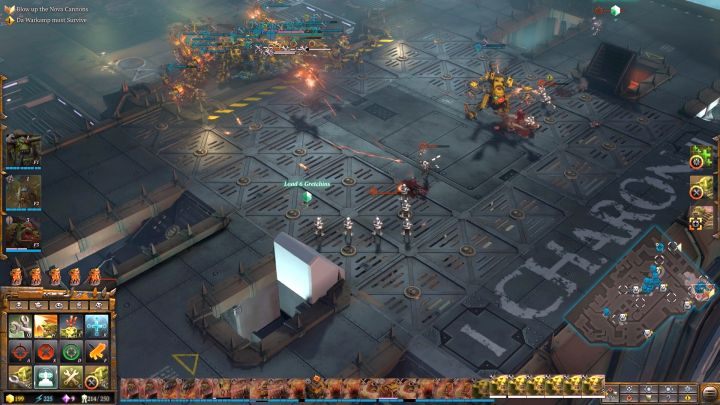 You now have to destroy the Nova Cannons and the mission will be over.

Once you're done with the Blood Raven's base, move your troops to the eastern edge of the map. The Nova Cannons that you must destroy can be found there. Break through the enemy defenses and send Gretchin inside the cannons. After a short while a cut-scene will initiate and the mission will be over.