The fifth mission of the single player campaign, in which you will once again command the faction of the Orks. During the mission you will need to capture several control points, defend your base, and finally, defeat the enemy leader, Wazmakka.

Search the Area for Scrap 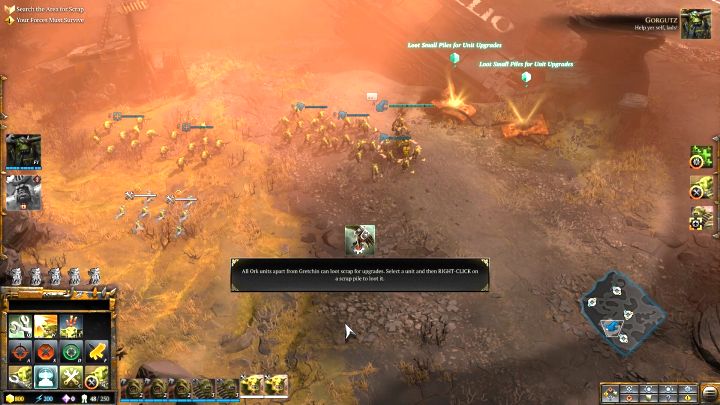 The first scrap piles of this mission.

As the mission begins, you will gain control over Gorgutz, 3 squads of Boyz, 2 squads of Shoota Boyz and 2 squads of Gretchin. As soon as you gain control of the troops, send Gorgutz and any other unit to collect the nearby Scrap in order to receive an upgrade. In the case of Gorgutz, his ability Spinnin' Klaw will heal nearby units if it is not interrupted at any point. In the case of other units, you can check the impact of scrap in the lower left corner of the screen while selecting the unit you are interested in. 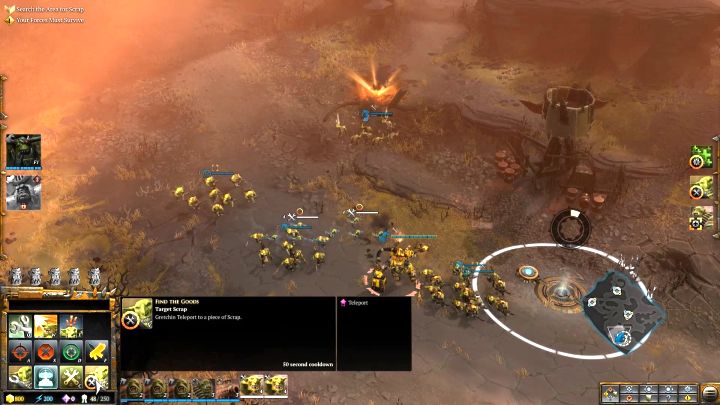 One of the several resource points that you can capture here.

Now send the troops south to occupy the resource point located there. Then start constructing the generators at the captured point, and order the Gretchin to build a Listening Post there. You should also remember to collect all the Scrap that you come across when moving your army. You will also receive an additional objective Build Units by Salvaging Scrap - you can accomplish this by sending Gretchin to at least a medium sized pile of Scrap. When you have completed the expansion of the resource point send the troops north-east, towards the marker on the map, which indicates the location of more Scrap. 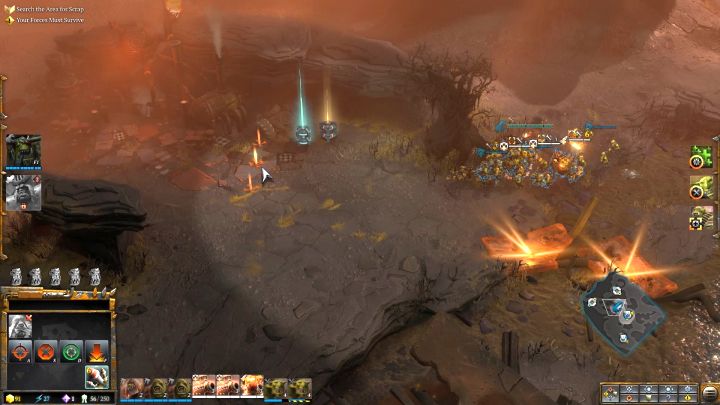 Additional resources are located to the left of the medium pile of Scrap.

On site you will medium sized piles of scrap - you can use it, as it was mentioned, to create one of several units, or a Waaagh! Tower. Send a Gretchin to make a Killa Kan out of the Scrap, and then send the newly constructed walker up to the next pile of Scrap to upgrade it. The Killa Kan is an Ork ranged unit, that launches rockets at great distances. It is very effective against all targets as it deals True Damage - the full damage of its weaponry, regardless of enemy armour type. 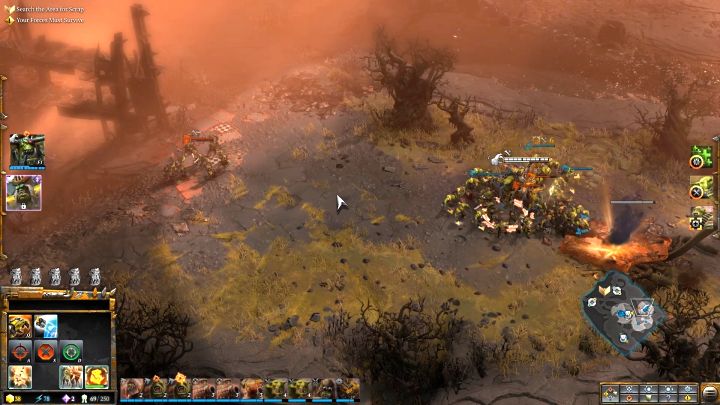 The first medium pile of Scrap.

Now send the troops north to take over the next resource point and, as before, build a Listening Post and all possible generators there. Use the Scrap located next to the point to create two more units - additional Energy and Requisition can be found to the left of the Scrap. The Deffkopta is an Ork flying unit, perfectly suited to harassing enemies, and after being upgraded it is also able to fly into enemy troops, inflicting heavy damage. The Trukk, in turn, serves as an Orkish transporter, allowing you to blitz the infantry inside towards a designated location, and after purchasing one of the improvements in the Pile O'Guns building, it can also be used to replenish the fallen units.

After grabbing the point and using up the Scrap, send the army to the east, where you will encounter more hostile Orks and additional Scrap. If you have some resources in reserve, use them to create units, or to upgrade any of your squads. In the meantime, the button used to summon an additional Ork elite unit, the Stormboyz, should become active. This is a group of elite melee fighters, which may not be the most resilient, but is able to inflict very serious damage. 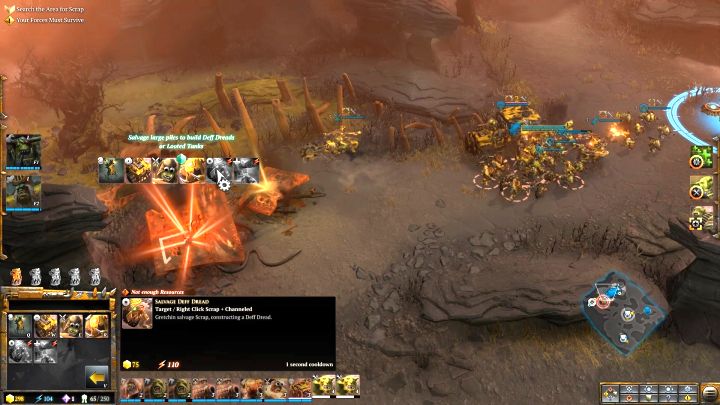 The first large pile of Scrap that you will encounter here.

Now head north and then to the west to reach the next resource point. Capture it and build the necessary structures there, then head west to find a big pile of scrap. You can use it to create the same units as before, plus a few extra ones. The Deff Dread is a powerful walker unit that perfectly handles all targets in melee combat, and is also very resistant to attacks. In turn, the Big Trukk is an Ork artillery piece - a self-propelled gun capable of launching powerful missiles at an enormous distance, yet is very vulnerable to melee attacks. Recruit the unit that suits you best and use the smaller pile of Scrap to improve it. 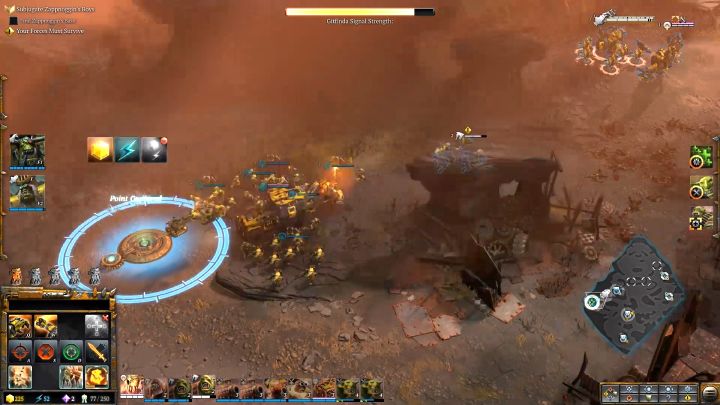 For the moment this is the last resource point that you can capture.

After you have collected the large pile of Scrap, you will receive a new objective - Subjugate Zappnoggin's Boyz. But before you do anything, take the resource point located in the western corner of the map and build all the necessary structures there. Your task is to find Zappnoggin's troops, and the progress of this process is represented by a bar at the top of the screen. It is game of "hot" and "cold" - the closer you are to the goal, the closer the bar will be towards filling up. 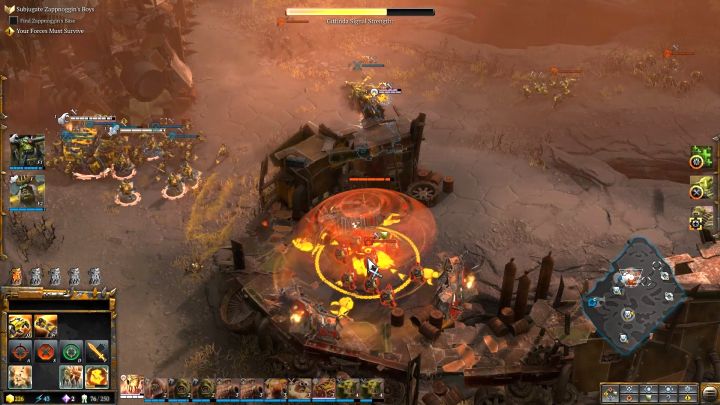 The location of Zappnoggin's base.

The place you have to reach is located near the central point of the map, as shown in the image above. Once you get there, you just have to keep going east, eliminating enemy forces on your way. Get to the resource point, capture it, build the structures you need, and then head north-west, keeping to the right edge of the map. 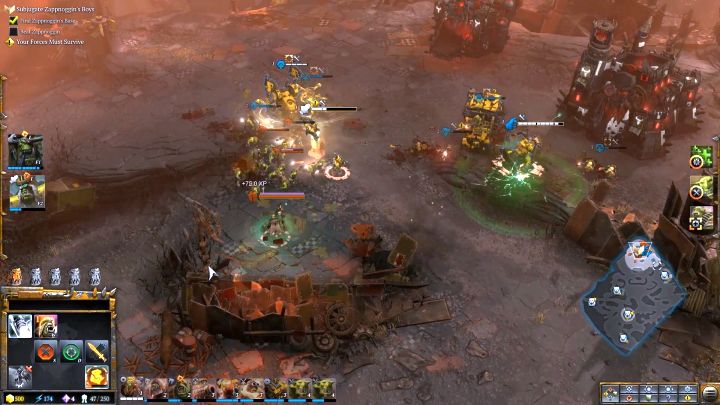 The place where you will battle against Zappnoggin.

When you reach the destination a cutscene will turn on, after that enemies will swarm the area, along with the mentioned Zappnoggin. Try to take out the enemy elite unit, Zappnoggin himself, but before you will manage do that, the enemy will slip away. You then have to eliminate some additional Ork troops so that the enemy elite will appear again. Concentrate your attacks on Zappnoggin, and after a while the enemy will surrender and join your side. 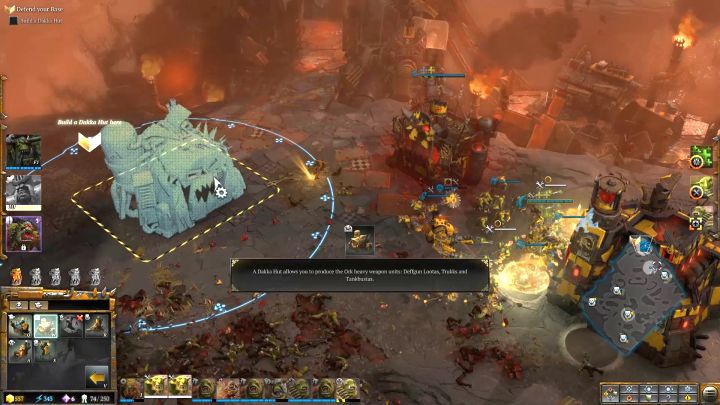 Now you have to construct some additional buildings.

You will be given a new objective - Defend your Base; the base which you have just been granted control over. Additionally, it will also be possible to summon the recently defeated Weirdboy Zappnoggin. This elite is a mix of a Nuker and a Support - his abilities allow him to teleport, inflict massive area damage and even to stun his opponents. In addition, he is good at fighting at a distance, dealing quite substantial damage. Summon him and start building up the base. You need to construct all Orkish buildings that are missing in the base - the Dacca Hut, Da Mek Shop and the Pile O'Guns. You also need to build additional Waaagh! Towers to raise the technological level, it is represented by the specific icons found in the lower left corner of the screen, above the command panel. You will need to build a total of 5 Waaagh! Towers. 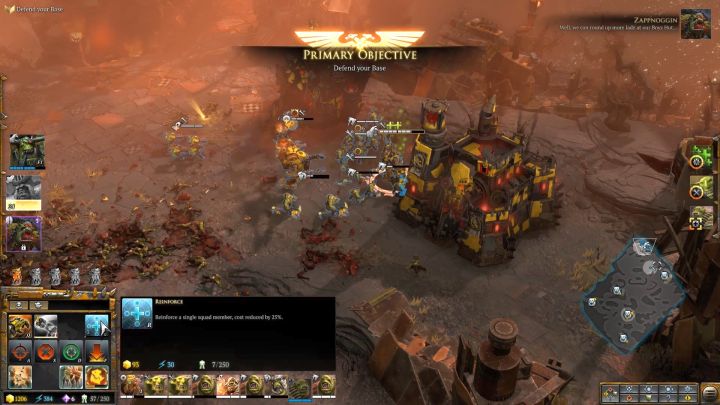 Reinforce troops after each wave of hostile soldiers.

Use the newly created buildings to recruit additional Orc troops - do so to have a mix of units that will allow you to fight both in ranged and melee combat. Your base will soon be attacked by several waves of hostile Orks that will come from the south. You have two options here - you can split the army in half and defend the western and eastern sides of the base with smaller forces, or you can focus your army at one point and run from one end to the other. Both ways can be equally effective. Your goal is to repel a total of 3 enemy waves. Remember to reinforce the army and create new troops after each wave, and be sure to activate the special ability of the Waaagh! Towers just before each assault. When you defeat all three waves, this objective will be completed and you will receive a new one. 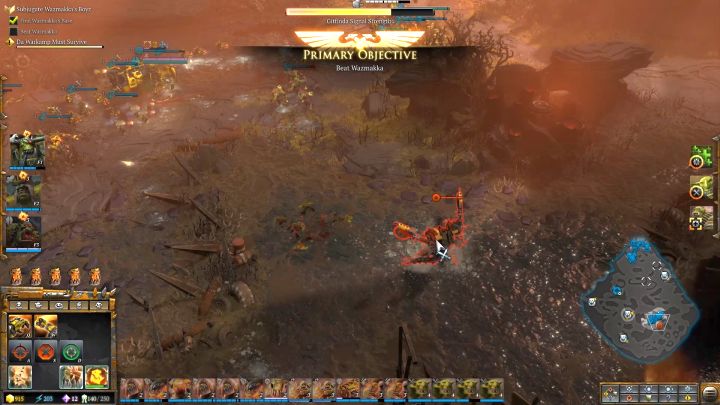 The entrance to Wazmakka's base.

The new objective - Subjugate Wazmakka's Boyz - requires you to find Wazmakka's base and defeat his troops. As with Zappnoggin, you must follow the signal indicated at the top of the screen. There is no complicated philosophy behind this task - the opponent's base is located in the lower right corner of the screen. Go there with your entire army, eliminating several smaller enemy groups on the way, and when you reach your destination a cutscene will activate. 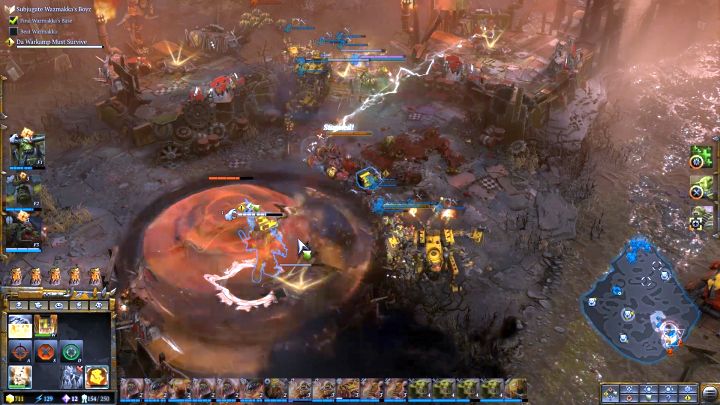 The final battle of the mission.

You must now defeat the enemy leader, Wazmakka. Annihilate any nearby enemy troops, then focus on the elite opponent. The process of eliminating him is hampered by the fact that he will jump between pieces of heavy cover, which only Gorgutz can reach with his special ability. Grind him down with Gorgutz and order the ranged units to keep shooting him all the time, and any heavy cover will soon succumb to your firepower. The enemy will occasionally summon a small group to help, but they do not pose a greater threat. When you get Wazmakka's health points to zero, another cutscene will activate, after which the mission will end.