The fourth mission of the single player campaign, where you will once again lead the faction of the Space Marines. During the mission you will need to break through numerous Eldar fortifications, save Librarian Jonah Orion and destroy the Eldar Power Core. 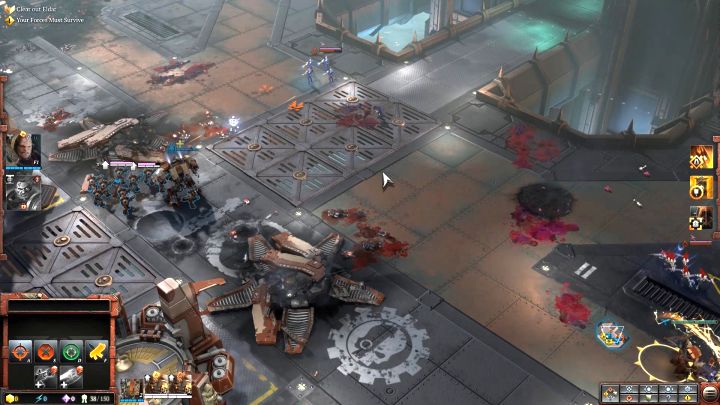 The beginning of the fourth mission of the single player campaign.

As soon as the mission begins, Gabriel Angelos and two units of Tactical Marines will be placed under your control - you can find the breakdown of Gabriel Angelos's abilities in the chapter titled Mission 1. Send Gabriel to face the troops on the right, and order the Tactical Marines to battle the troops nearest to them. After a short while, an additional unit will be dropped to the battlefield for you to command - the Dreadnought. It is a powerful walker of the Space Marines, which works very well in melee combat and has an absurd amount of health points. Point the Dreadnought towards the troops nearest to the Tactical Marines, then destroy the portal located to the north and instruct Gabriel to destroy the portal east of the base. Once all the hostile troops have been vanquished, you will have some time to regroup. 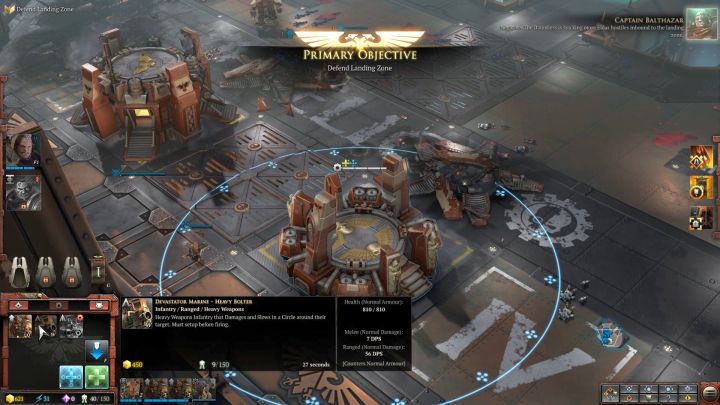 Recruit an additional squad and heal the wounded units.

You will receive a new mission to defend your landing zone - you simply have to prevent the enemies from destroying the base, which you just got control over. Commission the builder, the Servitor, to raise an Arsenal and then recruit one Devastator Marine - Heavy Bolter squad - you can find them in the Doctrine Chapel building or by pressing F7. This unit is capable of shredding through unarmoured infantry - it is simply a squad equipped with the futuristic version of HMGs. 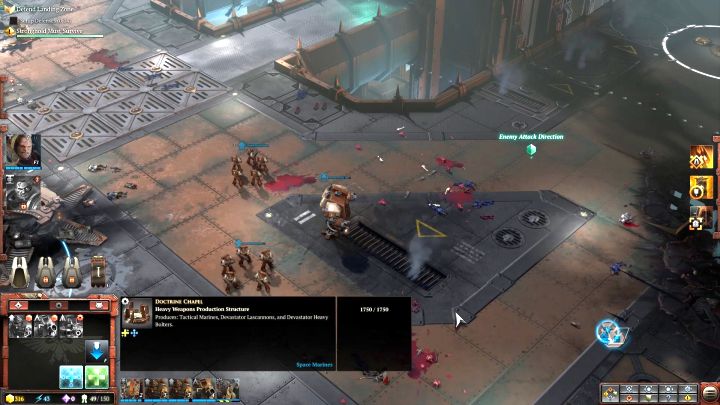 Split up your forces accordingly, in order to deal with the enemy forces.

Send the Dreadnought and both Tactical Marines squads to guard the eastern entrance to the base, and Gabriel and the Devastators to guard the northern side. After a while, the Eldar portals will appear on the battlefield and the enemy troops will begin their assault. They will not pose any threat, just keep the Howling Banshees away from the Tactical Marines and the Devastators - use the Dreadnought's and Gabriel Angelos's abilities to stop them. Try to destroy the enemy portals and keep eliminating all hostile infantry. After a while another portal will open, located to the north east of the base, and a squad of Howling Banshees will emerge from it - block them with Gabriel and/or the Dreadnought. Then eliminate all other enemies to finish the task. 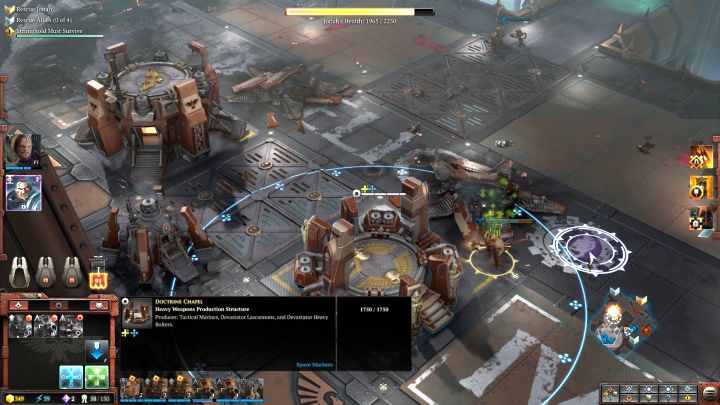 You will be able to summon an additional elite unit, Kill Team Ironmaw.

Your task is to save Librarian Jonah Orion. But before you do that, reinforce the wounded troops and use the Servitor to fix your Dreadnought. You should also recruit additional troops - preferably more Devastators. After a moment, you will be able to summon a new elite unit to the battlefield - Kill Team Ironmaw. This is a unit of much stronger and much more resilient Tactical Marines, which can be equipped with a flamethrower that inflicts massive infantry damage (also against targets in heavy cover) or rocket launchers, which are well suited towards fighting heavily armoured targets. In the meantime, you will also receive an additional quest, that will require you to save several allied units (4 in total). 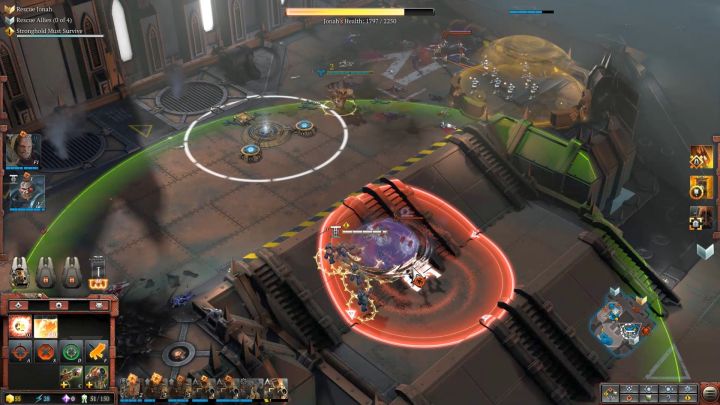 The eastern resource point, where you should send Gabriel and the Kill Team.

Now send Gabriel Angelos and the Kill Team to clear and occupy the resource point located to the east, and the rest of the army along with Dreadnought to do the same with the point located to the north. When you do this, recruit an additional Servitor and send one to each of the resource points to build Listening Posts. Do not forget to also build generators there to increase your resource income. 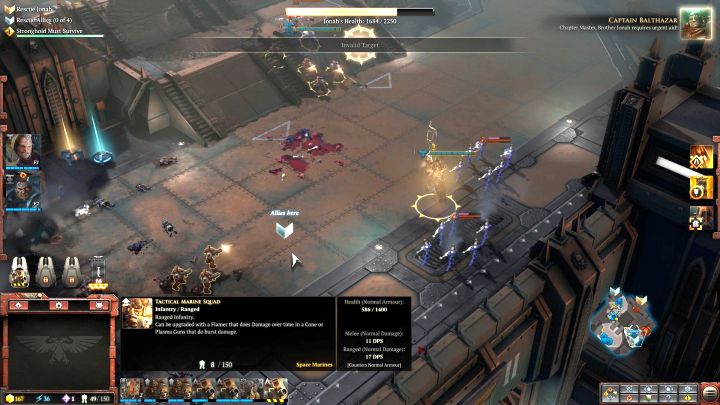 One of the four places where Space Marines can be rescued.

Command the troops that are marching with the Dreadnought to head north, towards the marker of the side quest, and do the same with Angelos and the Kill Team, only direct them to the south. In both of these locations you will find Space Marine units fighting the Eldar forces. Kill the enemies there to get Marines to join you. Once you do this, collect the scattered resources and direct all forces to the base to regenerate any damage and to train additional troops - preferably Assault Marines, who will be useful in melee combat, however, constructing the Barracks is necessary in order to recruit them. 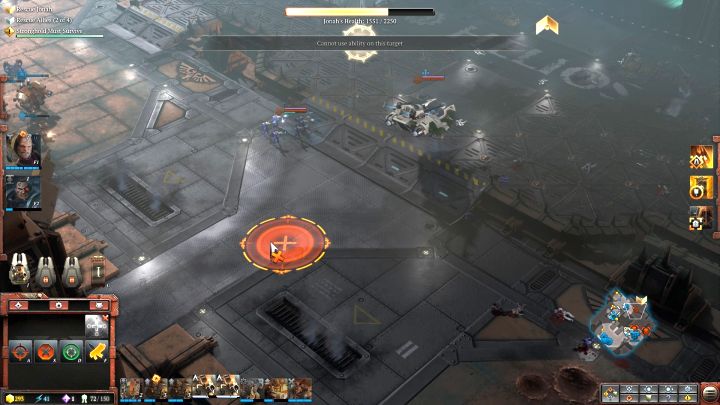 Now you have to send your troops to save Jonah.

Send all units to the main mission marker where Librarian Jonah Orion is located. To free him, you just have to take out all Eldar units in the area. Your army, after merging with the rescued troops, should have no problem with them. When the battle is over, a short cutscene will appear. When you regain control of your units, instruct Jonah to collect the nearby aid kits, which should completely restore his health.

Librarian Jonah Orion is an elite unit of the Space Marines. He plays the role of a support elite unit - he does not inflict as much damage as Gabriel Angelos, but he can cause massive chaos within the enemy ranks, by creating a huge discharge of energy with his Fury of the Ancients ability, which deals damage in a straight line. His other two abilities directly support friendly units. Emperor's Light increases the damage of allied troops and annihilates nearby enemies, and the Stonewall ability creates a magical barrier that modifies the effects of the other abilities, and also prevents enemy units from moving and shooting through it, making the allied troops inside safe from any attacks. 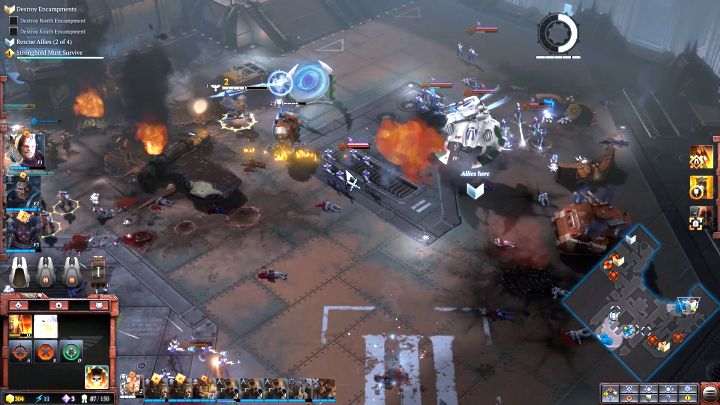 The third group of Space Marines that you need to rescue.

After saving Jonah you will receive a new objective, Destroy Encampments. You must destroy the camps located to the north and the south - the order is of course optional, but in this guide we will start from the south. Before you go to the golden marker on the map, send troops towards the location of the silver one, which marks another place with Space Marines for you to save. Slay the fairly large group of enemies you will find, and a new unit, the Predator Annihilator, will join your army. It is a tank that deals massive damage to heavily armoured opponents, but is very vulnerable to melee attacks. 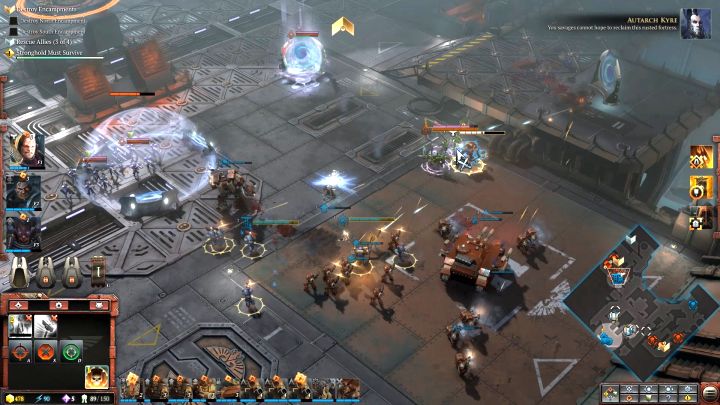 After the fight, send the troops to the post located to the north (remember to reinforce them in the base if you need to). On the way there you will encounter a few smaller groups of enemies. When you reach the location, send the Assault Marines to deal with the units dug in behind heavy cover or placed in elevated positions, and order the rest of the troops to attack the elite unit of the Eldar, the Striking Scorpions. They can be tracked easily on the battlefield, they are a group of green units. Take care of them as quickly as possible, since they deal great amounts of damage to non-elite units. Now it is time to destroy all remaining hostile squads and buildings in this area to complete this part of the mission. 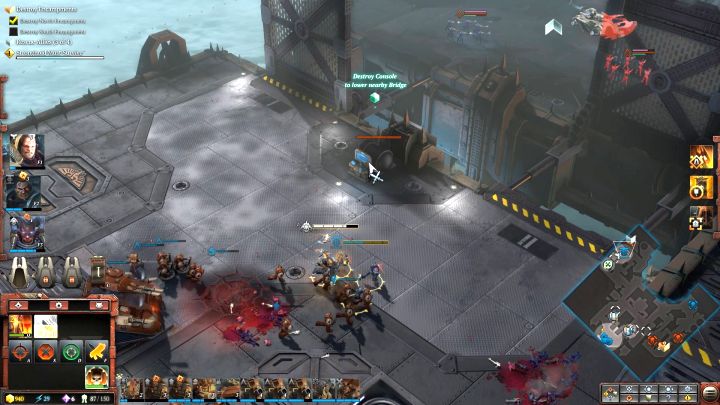 You need to destroy the console to get to the last group of Space Marines.

Before you go to the southern outpost, take control of the resource point and send a Servitor to build a Listening Post (do not forget about the generators!). Now point your army north-east towards the last marker of the side objective. You must destroy the console there in order to clear the way to the allied units. When you do this, send troops to assist the Space Marines. You will receive a new unit, the Predator Destructor. It deals less damage than the Predator Annihilator, but it damages several units at once, so it is great for fighting against infantry and clustered groups of enemies.

Now send all units to the base to regain strength. If you have not already done so, construct the Machine Cult. Recruit additional troops, infantry, or vehicles and make improvements to them, then send all units to the southern encampment. Defeat all enemies on your way and destroy the buildings there to finish the job. Take over the resource point and build generators and a Listening Post on it. 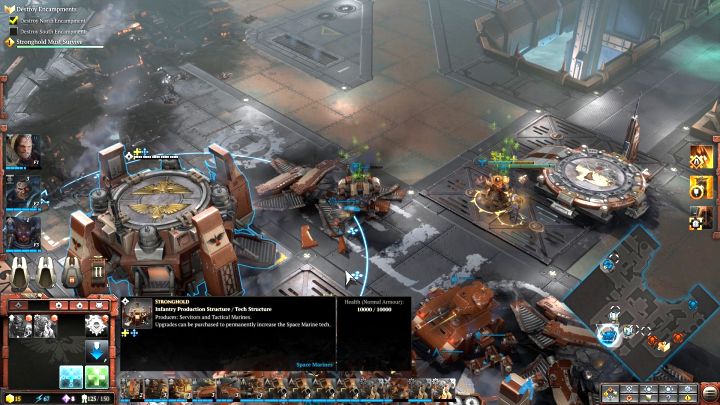 Before you attack the enemy, reinforce the troops and train new squads.

After destroying both encampments a cutscene is activated, and after that you will be given the Destroy Power Core objective. You will unlock a new section of the map, where you will find another Eldar base with the mentioned core in the centre. Recruit additional troops and commission any upgrades you lack, as you are now facing the final stage of this mission. 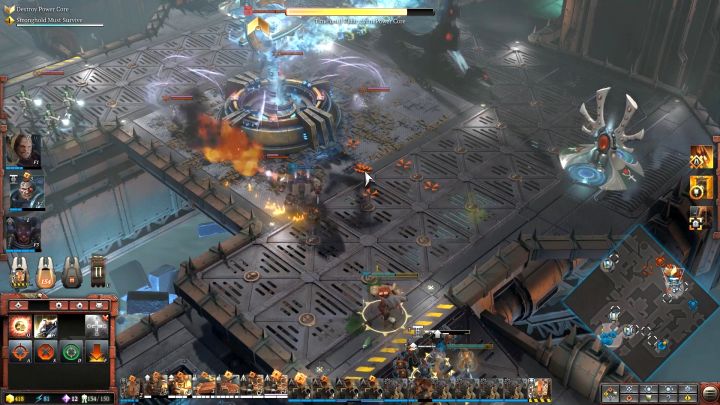 The target of the mission - the Power Core - which you must destroy.

When you are ready, send all units towards the marker on the map - the path of approach, left or right, does not matter. Enemy troops will not be able to stop your attack, but try to focus attention on the enemy Fire Prisms, the giant flying vehicles. They deal a lot of area damage and are able to dispatch your infantry very quickly. Eliminate all foes and head towards the Power Core. Nearby, you will find the heavily armoured infantry of the Eldar, the Wraithguards. They are slow, but they deal great amounts of damage, which is why you should focus your attention on them. With them gone, concentrate fire on the Power Core, and after its destruction you will have completed the final objective and the mission will end.