The third mission of the single player campaign, during which you will lead the faction of the Eldar. The mission objective is to free the Eldar forces, to learn to lead this faction in battle and to destroy the Orkish encampment.

At the beginning of the mission you will take control over an elite unit, Farseer Macha. She could in some ways be considered the leader of the Eldar faction, and is an elite unit that will accompany you throughout the entire campaign. You will immediately gain access to all of her abilities. They are:

These abilities work excellently with one another. Throwing the spear by use of the Singing Spear ability and then activating Psyker Blast will often allow you to exterminate an entire enemy squad. If immobilizing the enemy army seems more important, simply throw the spear and activate Temporal Weave. Thanks to this ability Macha is able to inflict massive damage and cause a lot of confusion within the enemy ranks at the same time. In addition, one of her doctrines, Macha's Presence - Last Chance, prevents the elite units of the player from dying, they will simply enter stasis and regenerate a part of their health. This can only take place once per elite, but may allow you to save a unit from certain death. 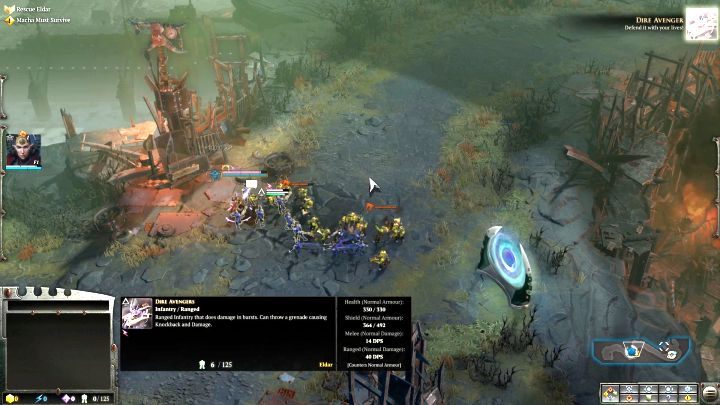 As soon as you regain control over Macha head to the right, following the narrow path. On your way you will encounter a group of Orks - vanquish them without using any abilities, as they will soon come in handy. After the fight, continue to the right to reach the Eldar camp, which is being attacked by more Orkish troops. Eradicate the enemies by using Singing Spear and Psyker Blast, and after the skirmish you will gain control over two Eldar squads of Dire Avengers. This is the basic Eldar infantry meant for ranged combat - they offer good damage and can also throw plasma grenades, but are hopeless in melee combat and vulnerable to attacks. 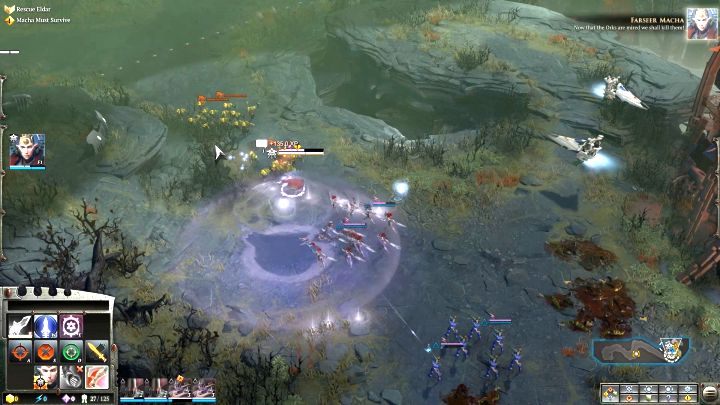 Exterminate the enemy troops that are coming from the north.

Take Macha and the newly acquired units to the right, where you will encounter a few groups of Orks - follow this path until you reach the next Eldar camp. Dispatch the Ork troops attacking the Eldar, and after a while you will receive two new units of Howling Banshees as well as two Vypers. The first are squads of troops which excel at melee combat, and the Vipers are, in turn, capable of scouting, harassing enemies and slowing them with their special ability - Temporal Bomb. Another group of Orcs will arrive from the north - use the newly acquired troops to easily get rid of them, which will result in a brief cutscene. 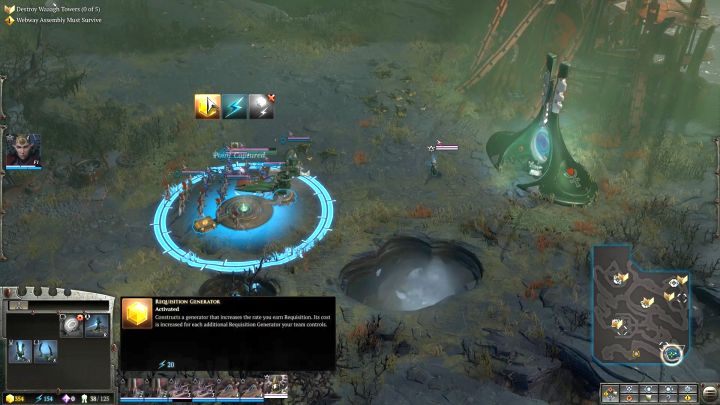 Do not forget to build generators on the captured resource point!

After the scene you will gain control over the Eldar base and you will receive one builder unit, the Bonesinger. Capture the resource point and order the builder to build a Listening Post there and then start building both generators (Requisition and Energy). Now bring the troops near to the main building of the Eldar, the Webway Assembly and replace all of the suffered casualties - if necessary, wait a few moments there and make sure that all units are at full strength. Your task is to destroy 5 Waaagh! Towers - the order is fully optional, however, try to follow the route described in this guide to make it easier for you to fulfil the task. 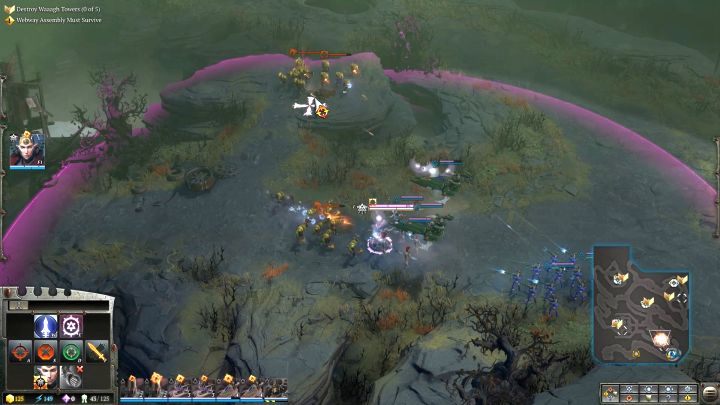 A group of Orks such as this one does not stand a chance.

Now send your troops north and then to the west, where a small group of enemies awaits you. Slay them and after a while an Eldar building, the Webway Gate, will be teleported to the location. These buildings create fields in which the passive ability of the Eldar troops, Fleet of Foot, is activated. When activated, units regenerate shields faster and are also able to move much faster (see more on this topic in Tips -> How to play as the Eldar). This building can be teleported to ensure its benefits even during combat, but at this point said ability is inaccessible. Use the opportunity and regenerate the shields of your troops, then head to the west. In the meantime, try to construct a Warrior Portal - do not worry about the location, the building can be teleported to any spot on the map at any time. 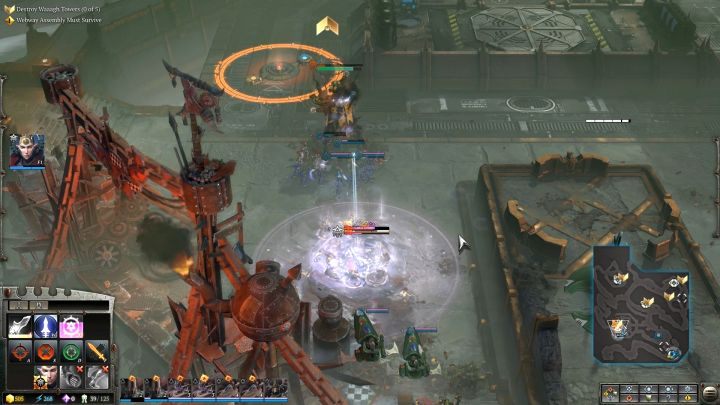 You will reach the place where the first Waaagh! Tower is located. You will come across quite a large group of Orks in the area, but they are not a force you would have a problem defeating. Before the skirmish begins, teleport the newly erected Warrior Portal to the vicinity of the battlefield, but not in range of enemy attacks. Use it to replace lost units in your squads. Now attack the hostile camp, annihilate the Orks and destroy the Tower. If the enemy activates its special ability (it will start glowing and you will hear quite distinctive music, then focus the attack of all of your units on the building, as it will receive much more damage). When you destroy the first Waaagh! Tower, you will activate a side quest that requires the construction of a Sky Portal - when you have an abundance of resources, it is definitely worth doing. 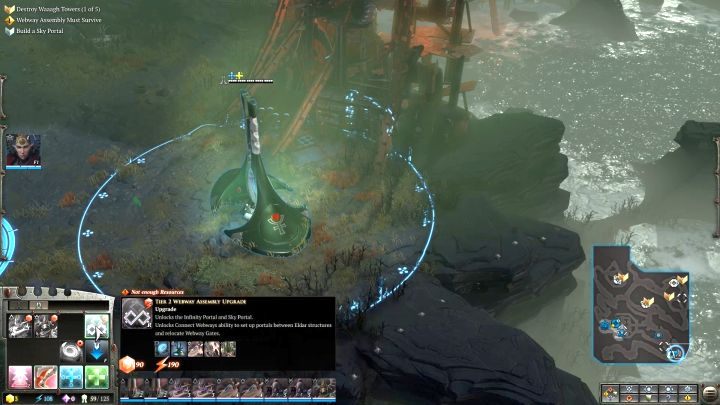 Try to upgrade the main building as early as possible.

Take the nearby resource point and build a Listening Post to protect it - do not forget to also construct all available generators there. Use the Warrior Portal to make up for any losses and create additional troops, then head to the west and follow that path. Make sure you have the right amount of resources to upgrade the main building - by means of the Tier 2 Webway Assembly Upgrade. This will give you access to new units and will also allow you to teleport the Webway Gate. 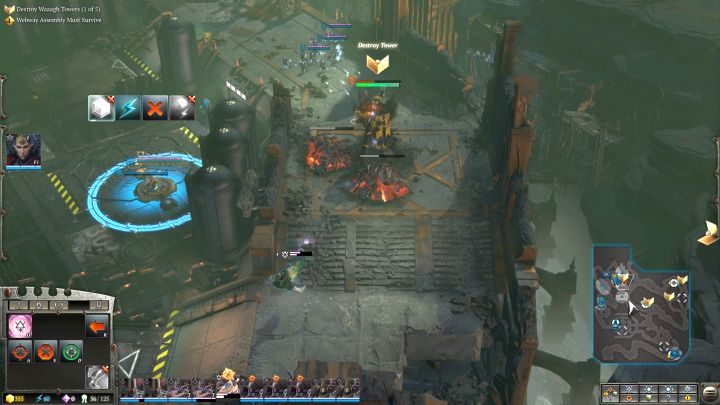 Keep going north along the path on the west side of the map, eliminating enemies until you reach the next crossroads. Then take off to the west and head towards the next Waaagh! Tower marked on the minimap - just follow the route. Before the start of the fight, teleport the Webway Gate to such a place as to reach the area at the resource point and then start the attack. Slaughter all the enemies here, regenerate the shields, and then head towards the marker on the map, where you will find the second Waaagh! Tower. Kill the nearby enemies, then get the tower health down to about 25%. Before you destroy it, send most of your troops to the crossroads to the right of the tower - the distance is quite large, so you must send them before the tower is destroyed. 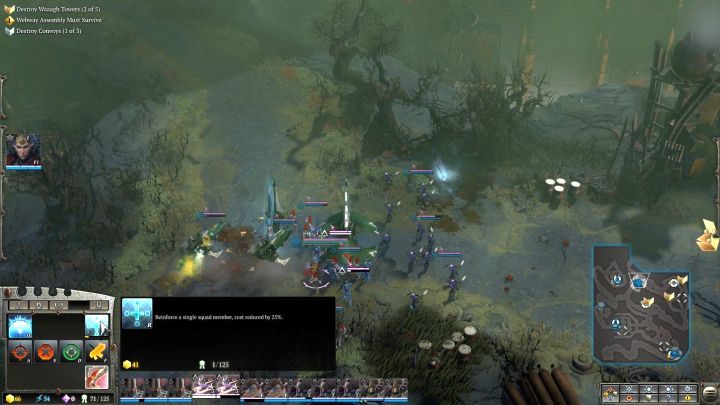 The crossroads, where the Ork convoys will appear.

As soon as you demolish the building, another bonus task is activated, which will require the destruction of 3 enemy convoys. If a convoy reaches its destination, the enemy will receive huge reinforcements, and you will have to fight a very large enemy army. Each of the convoys will pass through the crossroads (shown in the picture above), and the convoys will appear after you reach a specific site on the map. Place troops on the crossroads and destroy the damaged second tower to activate the task. The first convoy will arrive from the north - use the special ability of the Vypers, which allows them to create a slowing field and set them up on the convoy's route (southbound). Then destroy all 3 Ork trucks to stop the convoy. 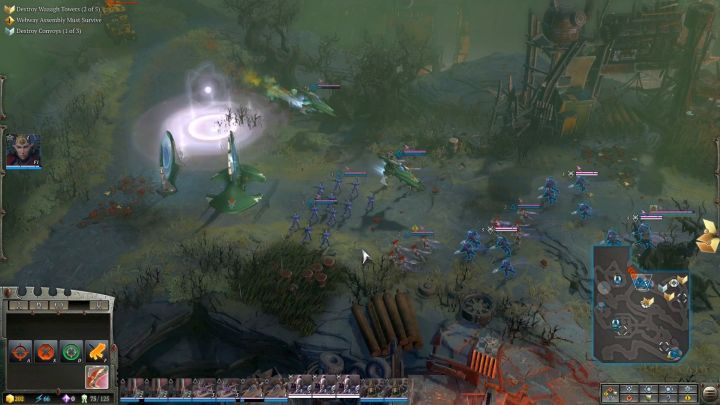 The second convoy will be headed east.

Replace any casualties and build new units, send the builder to take over the resource point located at the second Waaagh Tower! and build a Listening Post and generators there. At this point ignore the marker to the east, order the army north and turn east on the crossroads. Send troops to the Waaagh! Tower located nearby (not the one in the upper right corner of the map), take out a few enemy squads and wait for another convoy to appear. When this happens, send all soldiers to the crossroads immediately. The convoy will be headed east, along the same route as your returning troops - it will be guarded by a small group of Orcs. Kill them all. 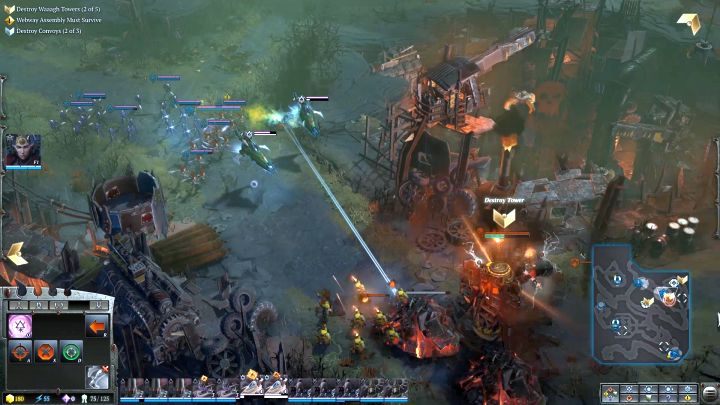 When you get rid of the second convoy, regenerate your forces and send the troops to the third Waaagh! Tower located to the east. Kill the enemies there and destroy the tower. If during the battle your troops have suffered, send them to the vicinity of your buildings (or teleport them) in order to regenerate their strength. Then direct them towards the fourth Waaagh! Tower, the one located in the upper right corner of the map. Defeat the enemy forces, destroy the tower and send the builder to the resource point to take it over and build the necessary structures there. You should also send the army back to the crossroads, as the third, final convoy is approaching. 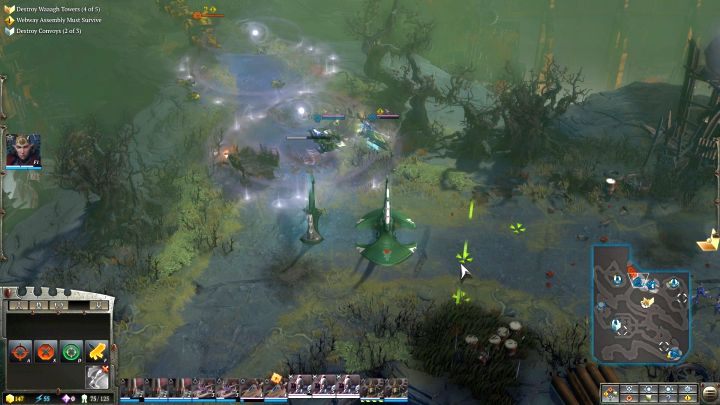 Use the special ability of the Vypers to slow down the convoy.

The third enemy convoy will be guarded by a much larger group of enemies, but they should not pose a great threat to you. Focus your attack on the trucks, and when they are destroyed, knock out the remaining enemies. After the battle regenerate your forces, construct additional troops and send all your armies to the last Waaagh! Tower. Eliminate the enemy forces and destroy the tower to complete the task. 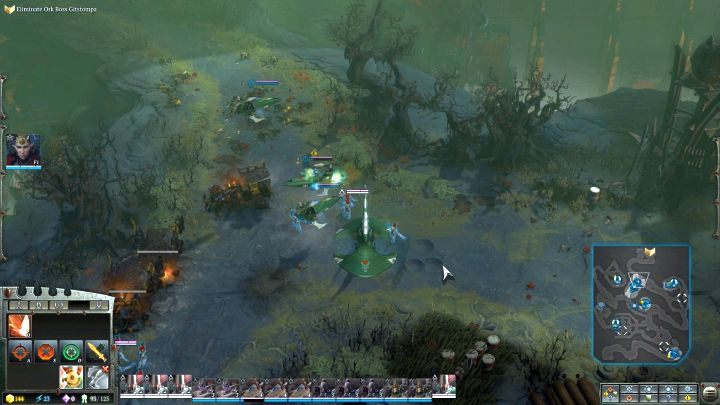 Be sure to reinforce your troops prior to the start of the battle!

After a short while, the map will be enlarged and a new section will be unlocked in the north. You will also receive a new quest that will require the death of the Orkish Boss, Gitstompa. Before you go, however, go ahead and reinforce your troops and construct additional squads, as the final confrontation of this mission awaits you and it is pointless to leave any of your supplies in reserve. You should also remember to commission upgrades for your units in the Soul Shrine building. 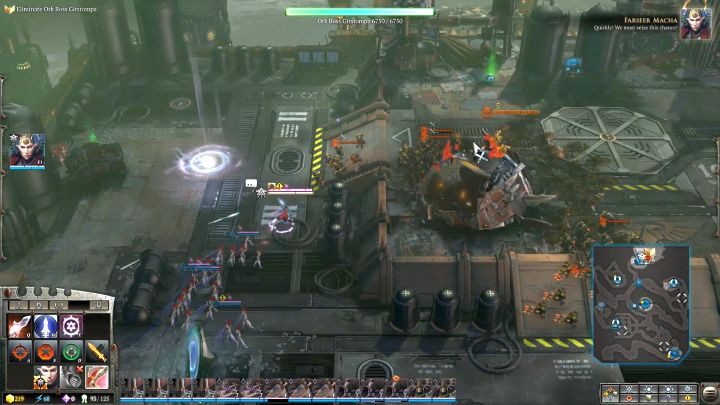 When you are ready, send all troops to the north, but do not enter the battlefield yet. Start the teleportation of the Webway Gate and only then send your troops in, which will trigger a short cutscene. Send two Howling Banshee squads and Macha to block the enemy leader, and all additional Howling Banshee squads should be deployed to handle the ranged Ork units in order to prevent them from firing. Use the Macha's powers to destroy one of the Orkish squads and then focus all firepower at Gitstompa, the Orc Warboss. Enemies will occasionally call in reinforcements, but this should not be a problem. When Gitstompa's body falls dead to the ground, the mission will be completed.