The second mission of the single player campaign, during which you will be controlling Orks. The objective of the mission it to get through the enemy defenses and during it you will be facing both Eldar and Space Marines. 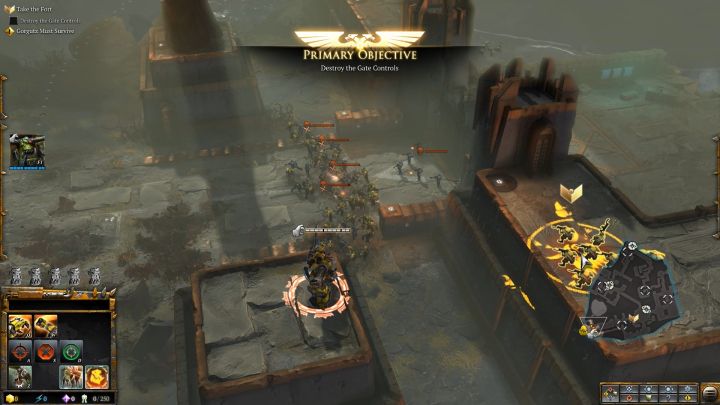 Use the Grapplin' Klaw to get to the other side.

At the beginning of the mission you will be controlling Gorgutz, the leader of the Orks. This is a typical tank elite unit - he won't deal huge damage on his own, but he's extremely durable and hard to neutralize. He has access to two useful abilities - Grapplin' Klaw, which can be used to get to a specified position (or higher / lower ground), dealing damage to enemies in the area and forcing them (taunt) to attack him. The second one is Spinnin' Klaw - once activated, Gorgutz starts swinging his claw around himself, dealing damage to enemies in the area and blocking all ranged attacks. The ability can be reactivated - Gorgutz then sends his claw towards specified location, dealing damage and taunting enemies. Additionally, the ability can be left active till the end - if Gorgutz looted Scrap (more on that in a second), all of the nearby allied units will be healed once the ability ends on its own. 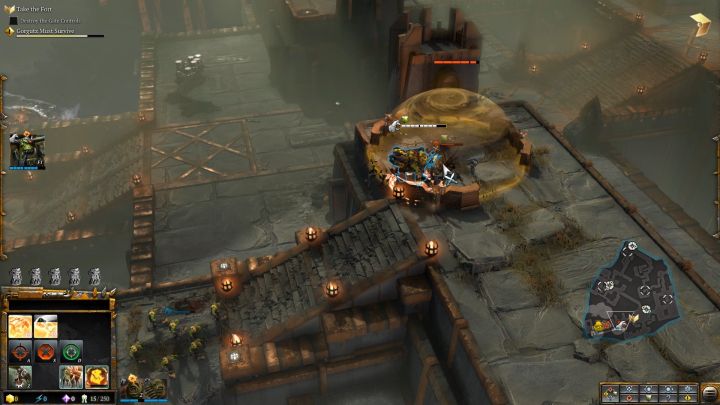 Enemies hidden in heavy cover are no match for Gorgutz.

Once you gain control over Gorgutz, use Grapplin' Klaw to get to the Ork squad located to the east of your current position. Those are Shoota Boyz, the primary ranged infantry of Orks. They will join you as soon as Gorgutz approaches them. Head east through the wall, eliminating all enemies along the way. Soon, another Ork squad, Boyz, will join you. This is a primary melee unit of the Ork faction and the most powerful "starting unit" (the one you can build from the beginning of the game) in the game. To the east of your army, at the top of the stairs, there's a group of enemies hidden under heavy cover. Send your Boyz and/or Gorgutz to quickly take them out - Boyz have Counters Cover ability, allowing them to enter enemy heavy cover, whereas Gorgutz can use his Grapplin' Klaw to taunt enemies out of it. Take the enemies out and continue the march. 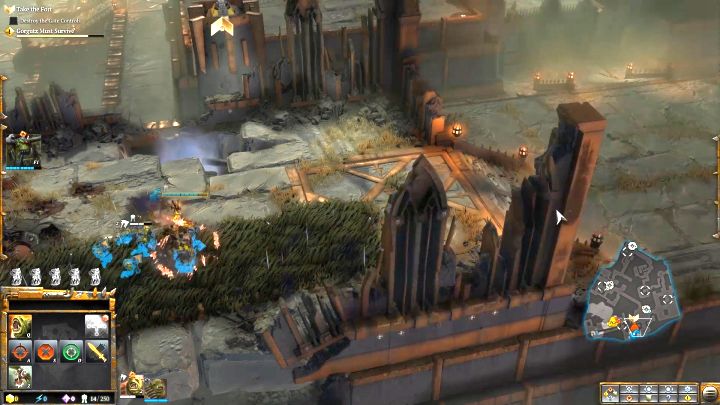 Use the bushes to avoid the enemy fire.

You need to get to the other side of the wall while hiding your units in the tall grass. You will soon reach the wall with a closed gate. Order Gorgutz to use his Grapplin' Klaw to get on top of the wall. Take out all the enemies present there and head towards the mission marker. Once there, destroy the gate control panel - this will allow the rest of your forces to enter the fortress and will unlock a new objective. 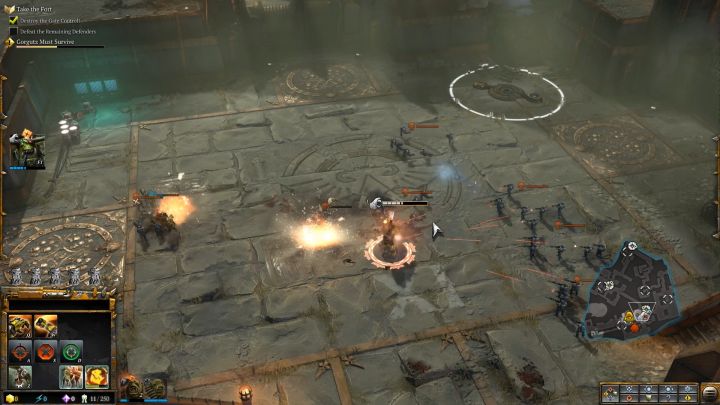 Defeat the remaining defenders of the fort.

Head inside the fort and take out all the enemies stationed there. Soon, a large group of Ork units will join you in combat. You won't be able to control them, but they will attack your enemies. Once the cut-scene is over, a new objective will be given to you. 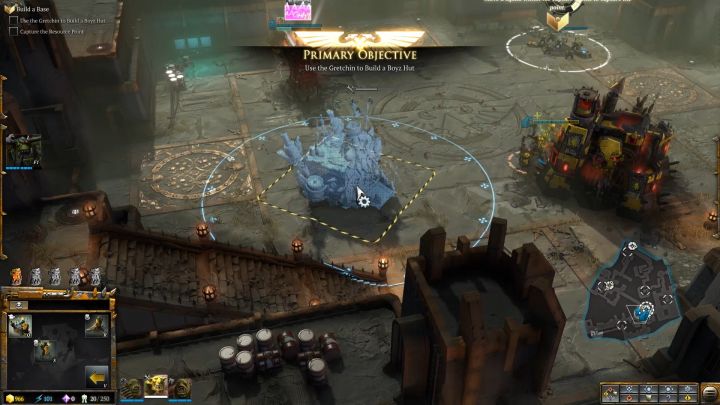 It's time to build your own base!

Your task is to build your own base. Send any unit to capture the resource point located inside of the fort. In the meanwhile, select Gretchin and order them to build a Boyz Hut. Once the resource point is captured, start building both generators - Requisition and Energy - there. Afterwards, a pile of Scrap will appear near the Waaagh Tower located in the base. Send one of your units (or Gorgutz) to equip them with Scrap, empowering them. Once all of the steps are done, a new objective will activate.

Take the Fort to Get the Important Bitz 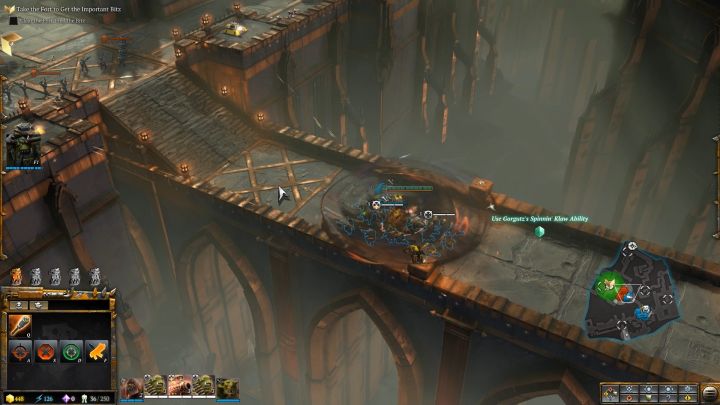 It's time to use Gorgutz's second ability, Spinnin' Klaw.

Recruit additional Boyz and/or Shoota Boyz units, take 1-2 Gretchin with you and start moving through the bridge located to the west of the fort. About midway through the bridge, you will be presented with the information to use Gorgutz's second ability, Spinnin' Klaw. This will allow your army to traverse the rest of the bridge without getting obliterated by enemy defensive structures. Place all of your units near Gorgutz, activate the ability and start moving through the bridge. Don't forget to order them to destroy enemy defensive structures - this will come in handy later. 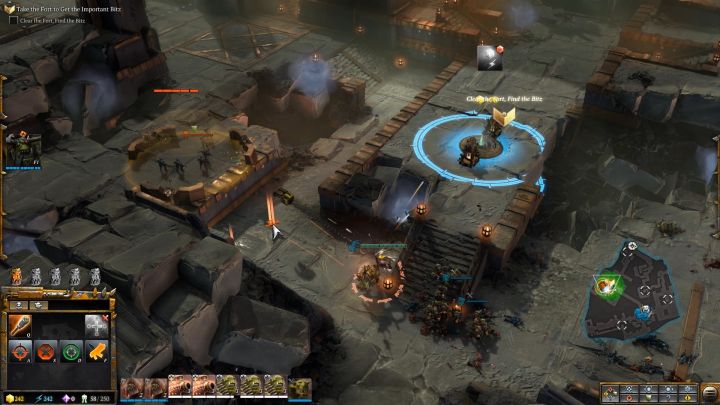 Capture the resource point and construct generators there.

Head to the mission marker where another resource point awaits. Take out all the enemies guarding the point and order any of your unit to capture it. Once it's done, build generators on top of it and order one of your Gretchin to construct a Listening Post there as well. Search the fort area thoroughly now, as you have to take out every single enemy lingering here. Once it's done, you will be given another objective. 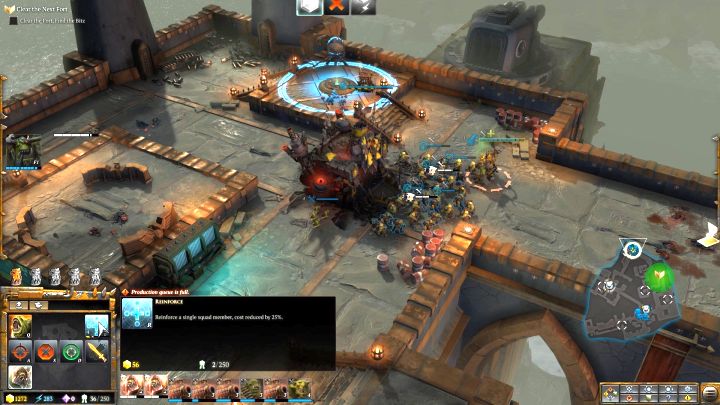 Build Boyz Huts from time to time to be able to easily replenish your troops.

Go through the gate and move a little further. Another turret will be blocking your wait. Use Gorgutz's Spinnin' Klaw once more to be able to get your troops to the other side safely, eliminating the said turret while your units are on the move. Afterwards, use Gorgutz's Grapplin' Klaw to jump to the enemies hiding under a heavy cover - this will draw their attention to Gorgutz, allowing your troops to move without getting hurt and engage the enemy. Once all that is done, capture the resource point in the area, build generators and Listening Post on top of it and take out the remaining enemy forces. You should build another Boyz Hut here now - this will allow you to easily replenish your troops and new units won't have to run across the entire map. 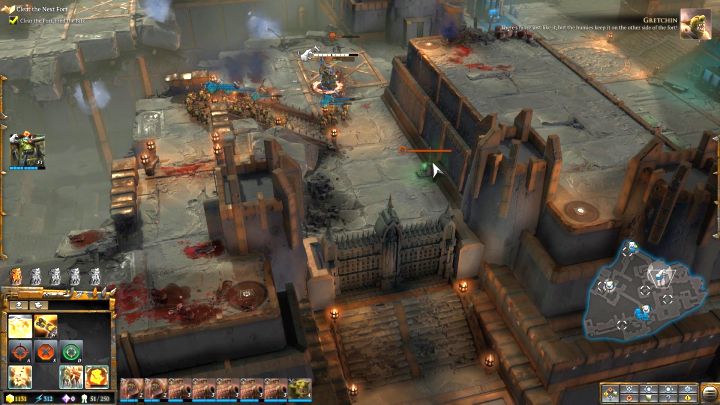 Don't forget to destroy a small control panel near the southern gate!

Head towards the next mission marker. Direct route won't be available, you will be forced to take a little detour. There will be larger groups of enemies in this area, but your own army should be strong enough to take them out without any problems. Continue towards the marker and you should soon reach an area where the Elder will join the fight. Take out all the enemies, but before you continue your journey, destroy a small control panel near the gate located to the south of your army. Doing so will open the said gate, giving you access to a shorter route to your base and allowing to easily replenish your troops and bring in the new units. Afterwards, head through the gate and to the east. 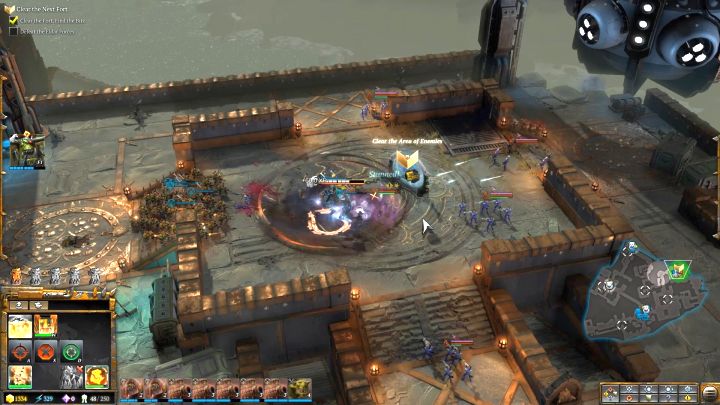 Clear the area and construct a Boyz Hut.

Take out the Eldar forces and, once it's done, send Gretchin to build another Boyz Hut. Once complete, send your units near it to reinforce them and recruit new units. Afterwards, head east to reach a more futuristic area where another group of Eldar forces will await you. Take them out and head south, towards the mission marker, eliminating all the enemies along the way. Once you've cleared the area, a short cut-scene will initiate.

Bring the Big Gun Back to Base 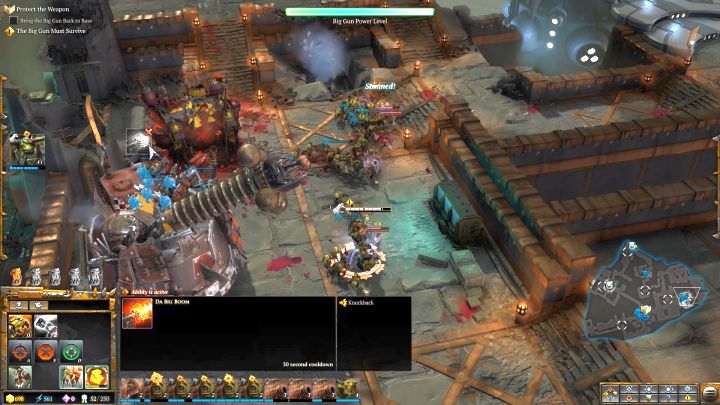 The cannon will misfire several times.

Once the cut-scene is over, the last objective will activate. You have to defend the huge, goofy-looking cannon and take it back to your base. You won't be able to move it directly, which is why you need to wait for the cannon to be charged (represented by the bar on top of the screen). Once it happens, a button to fire the cannon will appear. The cannon will misfire and you will need to wait and charge it again to be able to try once more. The second attempt will also be a failure, the third shot will yield results you're waiting for. With the third shot, the cannon will finally fire and the recoil will move it slightly to the west, towards your base. 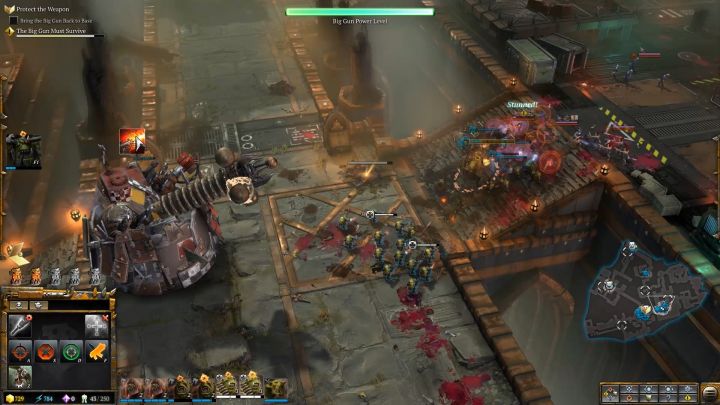 Subsequent attempts will allow you to move the cannon back to the base.

This peculiar movement method will allow you, after several shots, to move the cannon all the way back to your base. Your task here is simple - you need to protect it from the enemy, wait for the cannon to charge and fire it to move it towards your base. Afterwards, you have to repeat the whole process until it reaches its destination. You should also build a Boyz Hut near it - this will allow you to replenish your forces after an enemy attack. Once the cannon lands in your base, a cut-scene will initiate and the mission will end.