The first mission of the single player campaign, during which you will be controlling the Space Marines. The objective of the mission is to push back the Ork invasion on the Varlock Keep. The mission itself serves the purpose of a detailed tutorial. 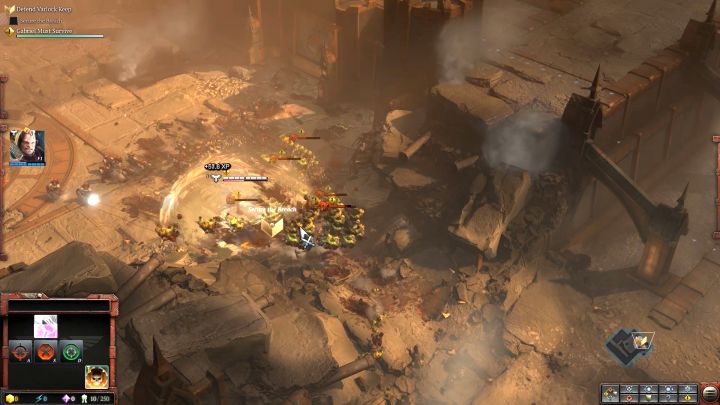 The beginning of the mission and the first usage of a special ability.

After a series of cut-scenes, the mission will finally start, giving the leader of the Space Marines, Gabriel Angelos, under your command. During the first minutes of the mission his effectiveness will be severely reduced, as you won't have access to his special abilities. You should take note of his passive ability, Critical Strike. By default, every sixth attack Gabriel will perform an enhanced strike, jumping into the air and slamming into the ground with his powerful hammer. This attack causes area of effect damage, throwing any non-elite infantry away, stunning them.

Take out the first Ork units to gain access to the first special ability of this elite unit - Retribution. This is a combination of a defensive and offensive ability. Once activated, Gabriel creates a vortex around himself, dealing damage and knocking all nearby units back (with the exception of some of the elite and larger units). Additionally, he creates a protective barrier around himself, protecting him and every allied unit inside of the globe from ranged attacks, sending them back at the attackers. This powerful ability can be used to counter some of the more powerful ranged units in the game, although you won't face them during this mission. For the time being, use it when Gabriel is surrounded by a large group of enemies.

Once the ability is unlocked, you will also receive a new objective - Secure the Breach. You just have to take out all the enemies coming from the hole in the wall located to the east of your position. Use the newly gained ability and most of the foes should be dead. Take out the remaining forces and then order Gabriel to attack the group coming from the west. Afterwards, a short conversation will initiate and you will be given another objective. 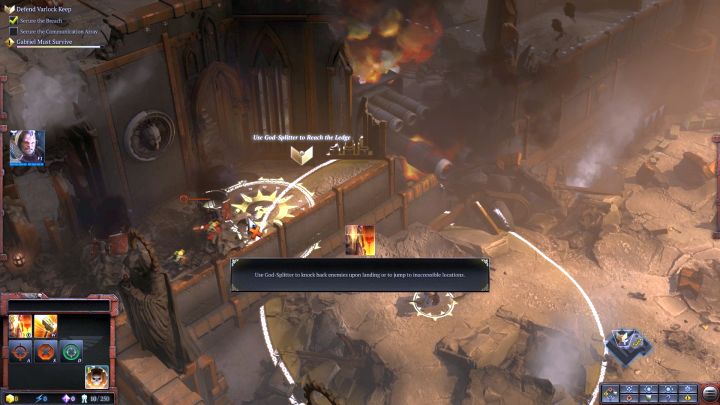 Use Gabriels second active ability, God-Splitter, to get to the specified place.

Further walk to the east is impossible, which is why you must head towards the marker on the mini-map. It's located to the west of the position you started at and fought the first Ork group. Approach the specified place and Gabriel will unlock another active ability - God-Splitter. This one allows him to jump to the specified location, dealing area of effect damage to all enemies present in the area, knocking them back as well. Additionally, it can be used to traverse terrain obstacles. Do exactly that now - use God-Splitter to jump on top of the wall located above Gabriel, near the objective marker.

Once Gabriel is on the wall, start eliminating Orks. After a short while, two Scout units will join you. Those units are invisible to the enemy due to the camouflage they use - enemy units won't be able to see and attack them, unless there's a detector there, or the Scouts are ordered to attack something. Scouts shouldn't be used for combat but for reconnaissance - they have a huge vision range, allowing them to easily spot most enemies. They can use stun grenades - enemies hit by them will receive a tiny amount of damage and will be blinded, preventing them from moving and attacking for a short while. 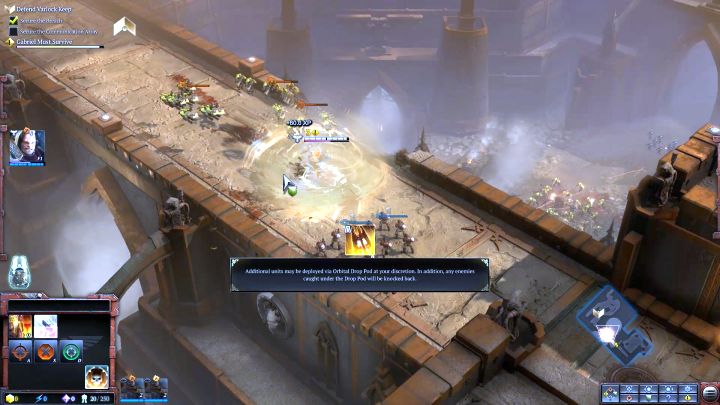 The first Space Marine Drop Pod you can call in.

Continue your march along the only available path, eliminating the enemies coming from the other side of the bridge. Make sure that no Ork unit gets close to the Scouts, your units are extremely vulnerable to melee attacks. Once you step on the bridge, you will be given an option to call in a Drop Pod. Click on the icon located at the left side of the screen and indicate the place they should land at. After a brief delay, a Drop Pod will drop to the ground and a Tactical Marines squad will emerge from it. Those are the primary ranged units of the Space Marines faction, vastly outperforming Scouts when it comes to combat effectiveness. However, try not to let any enemies near them, as they are still vulnerable to melee attacks. Continue your march until you reach another group of enemies. 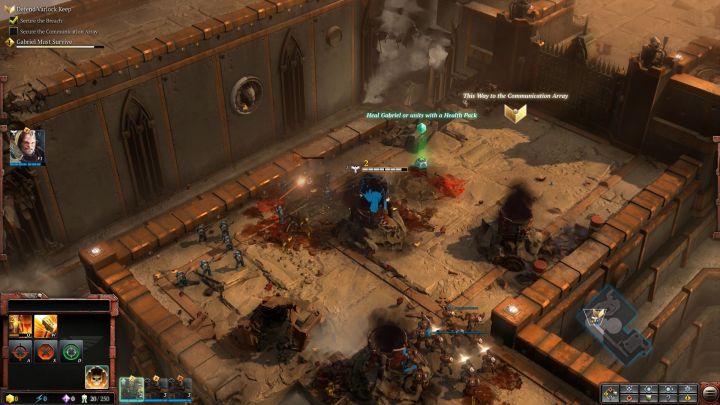 The first of many Health Packs you will stumble upon during the campaign.

Once you reach the turning, you will stumble upon the first Health Pack in the game. Those are special items that can only be found during the single player campaign. They replenish the health of a unit - they are capable of healing about 2/3 of the total health (restoring the squad size as well) of regular units and a varied amount to elites (depending on the total health of the elite unit). Take out all of the enemies in the area, send Gabriel to the Health Pack and continue the march. 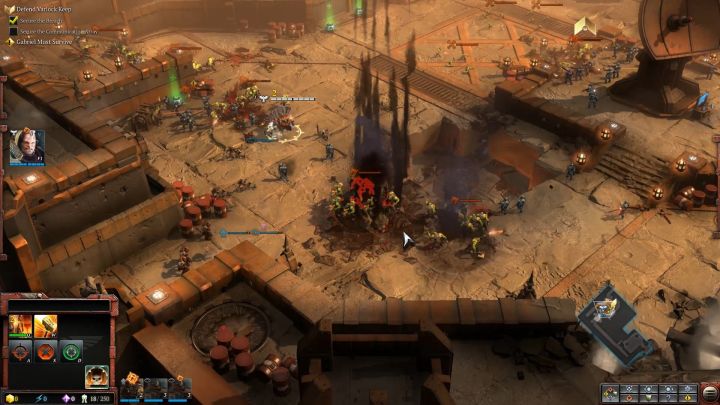 Watch over the Tactical Marines and Scouts.

You will reach an open area, where a group of Orks is fighting with the Imperial Guard. Move slowly, taking out all of the enemies along the way and monitor your Tactical Marines and Scout units. The Orks will be dropping reinforcements with Drop Pods and most of them will land in the middle of your vulnerable units. If that happens, send Gabriel Angelos to take out the Ork melee-oriented Boyz. Use the nearby Health Packs if needed, especially if a squad lost a portion of the units. Take out enemies and move north-east and after a short while reinforcements will arrive. 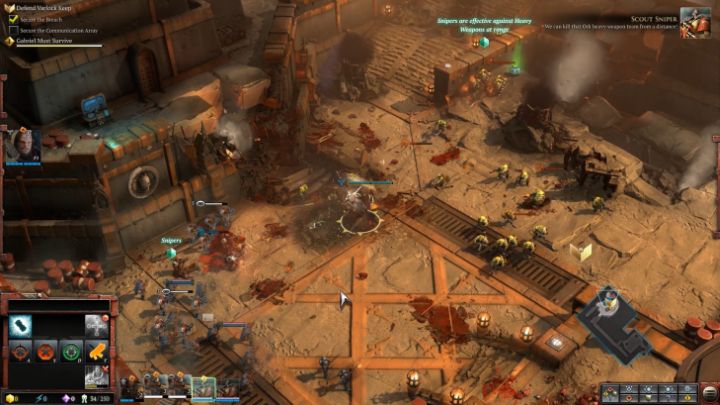 Scout Sniper units are extremely effective at eliminating enemies from a huge distance.

Two squads of Scout Snipers will join your team. Those units require a moment to set up and be able to fire and are extremely vulnerable to melee attacks, but have huge attack range and are capable of dealing severe damage to enemy troops. They are immensely effective against enemy ranged units, but you always have to keep another melee-oriented squad (like Gabriel Angelos, or, in the worst case scenario, Tactical Marines) near them to protect them from attacks. Order your snipers to attack the enemy unit marked by the game - they should be able to take them out in seconds. Take out all the enemies in the area to complete this objective and start another one. 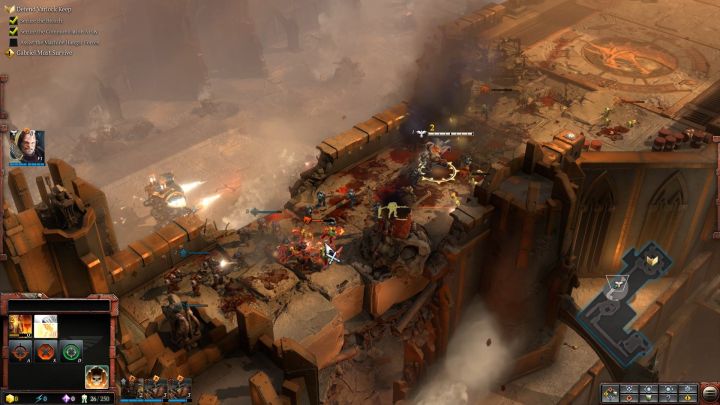 Journey through the narrow bridge is a perfect opportunity to abuse Agenlos' abilities.

You need to get across another bridge full of Orks. Take them out and move forward to initiate a short cut-scene. Once you've regained control, move a little further to start yet another cut-scene. The passage will now be blocked and you will lose control over the rest of the units. Fortunately, Scout Snipers will provide support from a safe distance. Order Gabriel to jump to the other side with the help of God-Splitter and take out the enemies present there. 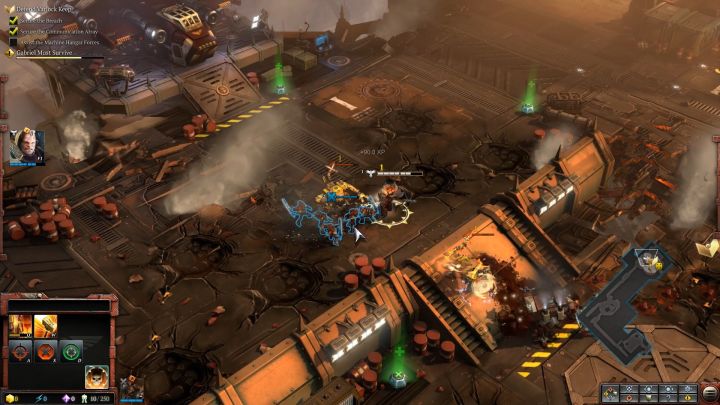 After a short moment, another icon should appear, allowing you to call in more reinforcements. This time an Assault Marines squad will emerge from the Drop Pod. This is a very mobile Space Marine infantry, specialized in melee combat and hit & run tactics. Additionally, they have access to jetpacks, allowing them to traverse quite a long distance (or get to higher/lower ground), dealing damage and knocking back units in the landing zone. Use them and Gabriel to take out the nearby enemies and head towards the marker. Use the Health Packs scattered around the area to heal your units if needed. Once you've eliminated all of the enemies, the objective will be completed and you will be given a new one.

Retake the Sanctuary to the South 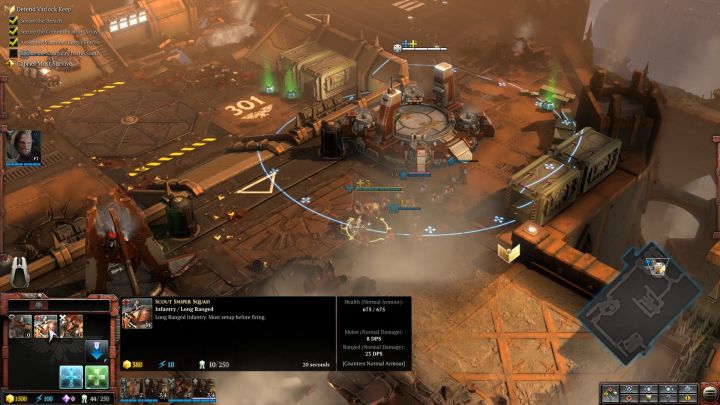 Recruit new units and reinforce those that were injured in previous encounters.

With the new objective, you will be given two additional Tactical Marines squads and a Dreadnought. The latter is a heavy walker unit specializing in melee combat, capable of dealing with practically any enemy in the game, outside of some of the more powerful elites. What is more, a Dreadnought is extremely durable and will take a lot of punishment before going down. You've also been given a new Space Marines building - Barracks. Use them to recruit more units and/or reinforce the ones that were injured in previous encounters. You can recruit any unit you want, although getting an additional Tactical Marines and two Scout Snipers units is the best choice. Once you're done, order all of your units towards the marked on the map.

You need to access the arena located below, but first you have to get through numerous Orks' units. Snipers are extremely effective here, as they have a height advantage. Take out all Ork units, heal your own forces with the Health Packs and head to the arena located below to activate the last objective of this mission.

Fend Off the Final Ork Attack 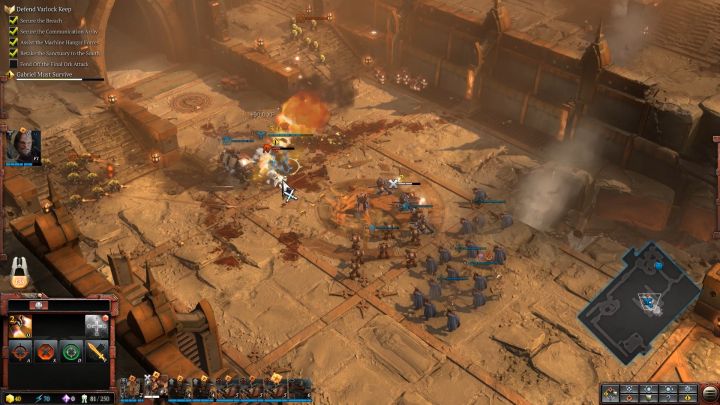 Proper unit placement is crucial during this encounter, as you will be attacked from every direction. Most of the enemy units will run from the front, from the direction of the large gate - place your Assault Marines and Gabriel there. Dreadnought should be ordered to guard the passageway you've entered the arena through. The walker will protect your vulnerable ranged units from enemy attacks, as a large group of Orks will soon come from there. Scout Snipers and Tactical Marines should be placed between those two walls, to prevent them from getting engaged in melee combat.

Your goal is simple - your army, or to be more specific, Gabriel Angelos must survive. Focus on blocking the enemy melee units with Gabriel, Assault Marines and Dreadnought. Snipers should be ordered to take out enemy ranged units (those will be, in most cases, standing on the stairs) and leave Tactical Marines on their own. Also, note that you can call a Standard (with Plant the Standard ability) to a specified location, giving your units additional profits and empowering them. This can be done by pressing G and specifying a location - although you won't be able to use it until the end of the mission. 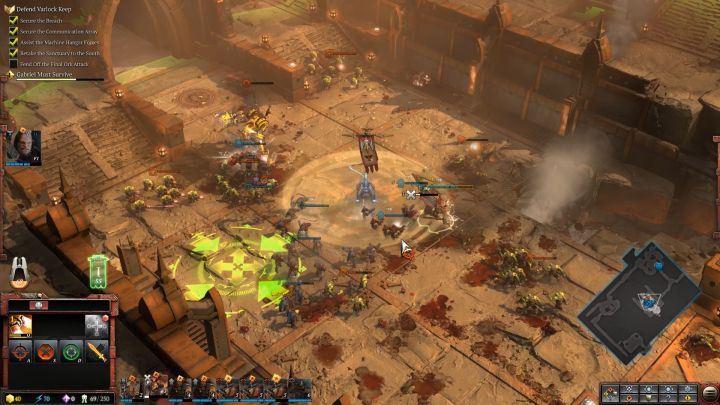 Plant the Standard ability will unlock at the end of the mission.

Take out enemy units until a Deff Dread, a large Ork walker enters through the gate. This means that the mission will soon be over. Take out all of the enemies in the area. Afterwards, a cut-scene will initiate, completing the mission as well.