1. The army of Orks can be compared to Zergs from the Starcraft franchise. Their squads are more numerous when compared to other factions (although it's not that extreme as in the first Dawn of War game. However, this comes at a price - they have lower durability than the remaining factions, especially the most basic squad of the Orks.

2. This faction uses one of the most unique mechanics in the entire game: Loot. Thanks to that, every unit, even an elite one, can pick up Scrap lying somewhere on the battlefield. Doing so enhances the unit. In most cases this gives them an additional ability - throwing grenades, creating protective shields that increase the movement of the unit as well, or by enhancing the abilities that the unit already had.

3. Loot is the crucial element of the gameplay of that faction. "Unupgraded" units of Orks are relatively weak (especially when compared to their enhanced, Scrap-wielding versions) and will, generally, lose to similar units of other factions. However, this changes when they are equipped with Scrap, allowing them to fight on par, or even be more effective. This is why you should always try to equip all of your units with this precious resource. 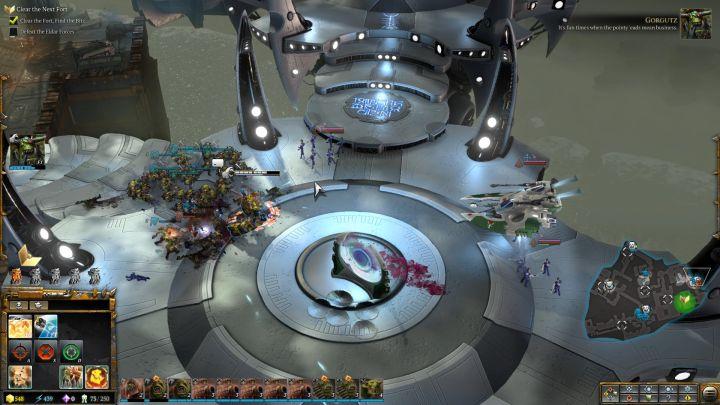 Ork troops are characterized by their numbers.

4. Salvage is another special ability of Orks. This is an ability available to the Ork buildings, Gretchin. With it, Gretchin can quickly turn Salvage into vehicles and constructs, or even Waaagh! Towers. Additionally, constructing units with the use of Salvage is a lot cheaper than normal recruitment.

5. Remember that Salvage has its requirements. You need to find Scrap of suitable size and you have to construct all the buildings that are normally used to recruit the units that you want to construct with the Salvage ability.

7. Scrap is generated from a number of sources. The easiest way to gain it is to use a Waaagh! Tower. Each tower generates Scrap after a specific time has passed. As the game goes on (higher escalation phases), towers will generate bigger Scraps. Additionally, Scrap can also be acquired from destroyed enemy vehicles and walkers - the bigger (and more expensive) the unit, the bigger the Scrap left behind.

8. Orks, in contrast to Eldars and Space Marines, can't upgrade the main building to gain access to new technologies. Instead, they use Waaagh Towers. Each tower you construct increases the tech level by 1 and to unlock all of the units and upgrades available to the Orks, you need to get to level 5.

10. Waaagh Towers are associated with one more thing - buffing your units. Each one of them gives access to Waaagh ability, which, after several seconds, creases a WAAAAAAAGH!!!!! battlecry. Once it happens, it hypes all the nearby Ork units, giving them a temporary buff to attack speed and damage. The buff lasts for several seconds, increased by 15s after upgrading the ability.

11. Additionally, WAAAAAAAGH!!!!! replenishes a portion of health and restores squad numbers of your units that were affected by the battlecry. Keep in mind that you need to have Gorgutz deployed on the battlefield for the healing effect to be present - otherwise it won't work.

12. Remember - despite the fact that WAAAAAAAGH!!!!! allows you to replenish your units for free, the ability needs several seconds to start (and several minutes to get off cooldown). Additionally, during the "loading sequence" of the battlecry, the tower will be visible on the mini-map. This gives the enemy team an opportunity to react - they might learn the position of your forces, send an army there to attack you, or reveal the location with a single unit and use superweapon to deal damage. Additionally, while the WAAAAAAAGH!!!!! effect is charging, the WAAAGH Tower takes increased damage from enemy attacks. Use this method as a health replenishment with care.

13. Roks is the Super Ability of the Orks. Once activated, a tractor beam appears in the speficied area. It will follow the first unit you order it to follow, be it an enemy or an ally. While it remains active, it deals damage to nearby enemies, expanding at the same time. After several seconds, a huge rock falls down on the tractor beam, dealing immense damage to all enemy units and buildings in the impact area. This ability is extremely effective against units that are cramped together - the enemy won't be able to locate the unit that the tractor beam is following, making it hard for him/her to decrease the casualties.

14. While using the Roks Super Ability you must remember to not target an enemy with low health with it. If the enemy unit that the tractor beam was following is killed, the beam will stop following anyone, becoming completely useless.