1. Space Marines units are, generally, the most durable in the game. They dont (aside from a few exceptions) have shields like Eldar units and they arent as numerous as Orks. They are extremely effective at prolonged encounters, but are less effective at short and against hit & run tactics.

2. Unlike the remaining factions, they arent limited to recruiting units at the base buildings. This faction can use Orbital Relays to send drop pods on the battlefield. Thanks to them, you can recruit a unit, prepare it and then drop it almost anywhere on the battlefield, allowing it to join the fight immediately and surprise the enemy.

3. It doesnt mean that you shouldnt recruit your units at buildings. Quite the opposite  you should use normal recruitment method in most cases, reserving the possibility to use an Orbital Relay to drop a unit on the battlefield when its actually required to do so. Remember  Orbital Relays take long time to become active again. 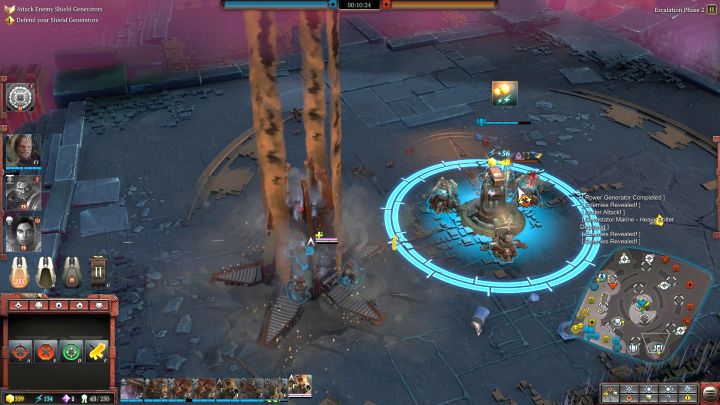 4. Remember that upon landing, Drop Pod sent from the Orbital Relay will deal damage to the enemy units it hits. The damage isnt high, but the enemy units are also knocked away once the pod lands on the ground, allowing you to create some confusion in the enemy ranks.

5. Drop from an Orbital Relay takes several seconds from the moment you set up the beacon and location. Normally, the enemy wont be able to see where youre going to drop the pod and that youre planning to do so, as the marker is visible to the player and his allies only. However, if there are a Detector unit in the area, the your foes will be able to see the beacon and prepare accordingly.

6. Aside from units, Space Marines can also drop a defensive Drop Pod with the Orbital Relay, one called Deathstorm. Its a heavily-armored pod that, once on the land, opens, revealing 5 heavy cannons inside. After a brief delay, Deathstorm will start firing at the nearby enemies, dealing huge damage. Proper placement, especially on the back of the enemy group, where, normally, there are sniper and long-ranged and vulnerable units, can devastate the enemy army, taking out multiple squads before the enemy even reacts. Deathstorm disappears after several seconds have passed or if the enemy is able to destroy it. You cant move it once it lands on the battlefield.

7. Space Marines can call down a special standard on the battlefield, with the ability Plant the Standard. Once used, a standard will appear on the specified location, knocking away enemies in the landing area. Afterwards, it sets up, offering powerful bonuses to allied units in the area. The effectiveness of the standard increases as your tech level goes up, offering more powerful bonuses and even allowing your units to heal when in the range of it. Be wary though, as the enemy can capture the standard by placing any unit near it, disabling all the benefits it offers.

9. Remember to select your elite units with care. Gabriel Angelos is a good choice for the early game, as he is capable of defeating multiple squads on his own and he remains effective during the whole game. Additionally, he mitigates the lesser melee effectiveness (in comparison to other factions) of Space Marines units  other factions have more units for the task (the Dreadnought is the exception, but this unit is quite expensive and you wont have access to it during the first 15+ minutes).

10. Space Marines are the faction that is the most novice-friendly of all the ones available in the game, especially to hose players that never played Dawn of War games before. Their armies consist of infantry units and machines, making them the easiest for players to find themselves in. This is the reason why you should choose this faction if you arent familiar with the franchise, to learn the basics of the gameplay.