1. Monitor the situation on the battlefield! If you've noticed an enemy approaching your resource point with a small group of units, send a small force to chase them away. There's no point to run around with the whole army from one place to another - you'll lose time and the enemy can take the opportunity and strike you at a different place.

2. Sometimes it's better to just let go of a certain resource point. If the enemy attacks a specific point with a huge army, and you don't have an adequate strike force to defend it, ignore it and don't engage the enemy in combat. The point can be recaptured later, but the potential loses you can suffer during an encounter might lose you the entire game.

3. Place Listening Posts on the resource points you've managed to capture. This is most important for the points situated deep into the battlefield, vulnerable to enemy attacks. It won't allow them to protect themselves against a powerful army, but they can easily fend off a single squad and give you time to react when the enemy attacks. 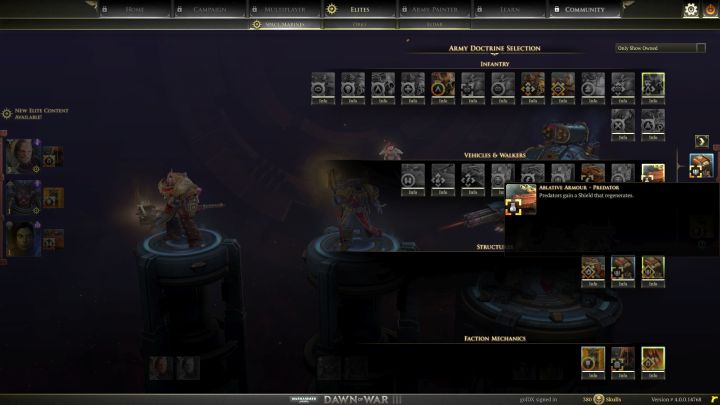 Selection of proper doctrines is crucial to your success.

4. Construct generators on the resource points you've captured. Generators are quite costly, especially during the first minutes of the match when the resources are scarce, but each one of them will increase the Requisition, Energy and Elite Points generation significantly. Additionally, the enemy will need to destroy those generators before capturing a point, giving you some time to react.

5. Don't be passive! Don't stay in the base and wait until you create your "perfect" army to attack the enemy. The enemy is recruiting units at the same time and it won't change anything. Additionally, by staying at the base all the time you won't have any idea what's happening on the map, beyond the fog of war (where there are no allied units and you have no vision).

6. Check what your enemy is doing. If you've noticed that a majority of his/her army consists of light infantry, there's no point in investing into units that will deal increased damage against heavily-armored units. If, in turn, the enemy focuses on melee-oriented units, you should invest in some of those as well, so that the enemy units won't have a huge advantage over your own. If the enemy likes to hide his/her units under heavy cover, use squads that have the Counters Cover trait, allowing them to get under the protective bubble and eliminate the enemies hiding there.

7. Use Heavy Covers with caution. Those will give your units a powerful defensive boost, protecting them from enemy ranged attacks. However, squads staying under the protective bubble are extremely vulnerable to units with the Counters Cover trait. Normally, a unit won't be able to get into the protective bubble created by the enemy army, but units with the mentioned trait can bypass it and enter those at will. Some units, like snipers, have no chances against an infantry squad specialized in melee combat.

8. Protect resource points that generate Elite Points. Elite Points are used to create elite units, and the more of them (points) you have, the faster you will be able to call in your elite units to the battlefield. Elite Point resource points are the only ones you have to keep an eye out for all the time - don't let the enemy control them, otherwise they will call in powerful elite enemies and use them against you.

9. Use gates and bridges. You can find closed bridges and gates on some of the multiplayer maps. There's always a console located right next to them. Destroying the console will cause the gate / bridge to open, allowing access. This in turn will give you (and your enemy) more opportunities, as you can attack them from a direction that they aren't expecting an attack from.

11. Remember that your units can move using two different commands. By clicking the RMB (Right Mouse Button) on a given area, your units will follow the command, moving towards the specified area, ignoring any enemy units along the way. However, you can also press A (or the appropriate button on the left side of the interface) and issue the movement command afterwards. In this case, the units will still move to the specified area, but they will engage any foes along the way.

12. Use terrain elevation to your advantage. If your units are located above the enemy ones, you will be able to see the enemy units, but the foe won't be able to see yours, at least until they start attacking. This can be used similarly to Stealth Covers and bushes, to prepare ambushes for the unsuspecting enemy units travelling through the area.

14. Escalation phases alter the game significantly - the gameplay during each one of them looks different. During the first minutes of the game, losing a single unit is a severe blow, which is why you should try and retreat it before it's killed. As the game goes on, each player will have more resources and everyone will simply have more units to use on the battlefield, making potential loses less severe.

16. While planning an attack on the enemy turret, try not to move your army in a tight formation. Turrets deal considerable damage, attacking units in a straight line - you should try to scatter them, decreasing the potential loses.

17. As your army grows, the upkeep costs will also increase. This works similarly to the mechanic found in Warcraft 3 - when you only have a small amount of units, you won't suffer any consequences, but as your army grows, you will generate less and less resources per minute.

18. Protect your elite units and prevent them from dying. You can summon them again even after they are killed in combat, but each death increases the respawn time - the more often a unit will die on the battlefield, the longer you will have to wait until you can summon it again. Try to take them out of the battlefield before they die and send them near building to heal them.

19. Use the appropriate doctrines to go along with your playstyle. Thanks to that, units will gain new abilities and some of them might even function differently.

20. Remember, that Skulls, which are the currency you can use in order to purchase additional elites and doctrines, can be acquired only during multiplayer matches. You will not gain any during custom games, regardless of whether your opponents are actual players of AI. You can only get them via the quick match option.

21. Retreat your wounded squads! Reconstructing units back from scratch is very costly, and regenerating losses by replacing the lost troops will allow you to save about 25% of the resources.

22. Use your resources. There is no point in hoarding them and saving them "for later use", since your enemy could overrun you with a much more numerous army at any point in time, rendering your long-term reserves useless in the face of an immediate threat. Try to use up your resources as you get them by creating new forces or upgrading the ones you already have at your disposal.

23. Keep in mind, that most units have special abilities. These can be grenades, which can shatter the enemy line or stun nearby units, special weapons, such as flamethrowers, or movement oriented abilities, which allow the unit to jump/charge to a given location. The appropriate usage of said skills can make the difference between victory and defeat.

24. Decide which elites you want to summon, and in what order. Sometimes it is worth waiting to summon stronger units, which are worth a lot more elite points, but this can often backfire should your enemy choose a cheaper option, that will still allow him to gain the upper hand over your troops. You should also avoid turtling too much in 1vs1 games, as it is the mode in which elites grant the biggest advantage over the enemy - you can afford more luxury especially in the 3vs3 mode.