The Warhammer 40,000 Dawn of War III guide contains all the information required to fully understand this title. Inside you can find a detailed walkthrough of all of the 17 missions of the single player campaign, as well as videos showing the completion process of each one of them. Additionally, the guide contains a thorough description of all of the factions available in the game - Space Marines, Eldars and Orks - coupled with their special traits, units, buildings and available doctrines. What is more, the text contains information about their playstyles, in every game mode available in the game, from the early minutes to the end of the match.

Furthermore, information about the gameplay mechanics can be found inside, both the basic ones, such as moving around the map, collecting resources, constructing buildings and issuing basic commands, as well as more advanced, associated with elite unit recruitment, using special abilities and customizing doctrines to suit your playstyle. Inside there are also chapters containing tips, general ones, associated with specific factions and even gameplay modes available in the game. The text also contains FAQ (Frequently Asked Questions) chapters, where you can find solutions to all of your problems. There are also chapters about system requirements, controls and available achievements, as well as the methods to acquire them.

The following guide was prepared based on the Normal difficulty levels, although all of the differences between it and Hard mode were marked in the text. 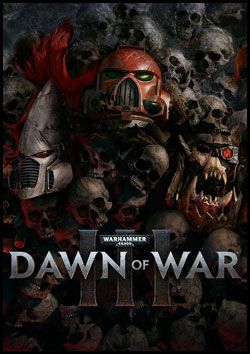 Warhammer 40.000: Dawn of War III is a real-time strategy game. As the title suggests, the player is taken to a dark world of Warhammer 40.000, which emerged along with tabletop battle games released by Games Workshop. In Warhammer 40.000: Dawn of War III the story is centered around three factions, namely the Space Marines led by Gabriel Angelo and belonging to the Blood Ravens Chapter; the Eldar led to battle by a farseer named Macha and the Orcs ruled by Gorgutz - an iron-fist warlord. All the three groups invade Acheron, trying to reach a powerful weapon hidden on the planet.

Warhammer 40.000: Dawn of War III combines the best elements of the previous installments together. Thus the players receive a game focusing on spectacular battles fought on huge maps and involving hundreds of units. The mechanics behind construction of bases, known from the first installment, are back. The player is obliged to build energy generators and take control over specified areas, which gives access to resources needed to produce machines and train units. The fans of the Space Marines are going to be glad, for their favourite units can be dropped on the battlefield in capsules, right onto the enemies.

The player can become a leader of one faction, choosing from among the Orcs, the Space Marines and the Eldars. Each group has different units, heros, abilities and buildings. During the battles, a significant role is played also by large rovers, such as Imperial Knights (Space Marines), Gorkanauts (Orcs) and Wraithknights (Eldar). These units also have a large set of special abilities requiring manual activation.