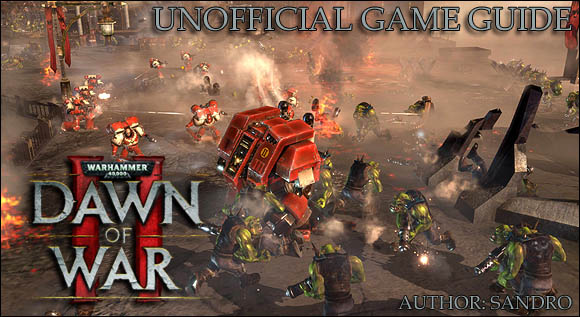 I'm proud to present a guide to Warhammer 40,000: Dawn of War 2 - real time strategy game set in the world created by Games Workshop. This guide contains a walkthrough for the single player campaign as well as tips for multiplayer games. The most important parts of each mission were illustrated so that even casual players could find help they need.

I hope that this covers all possible issues you might encounter during your game. Enjoy your reading, and most importantly hours spent playing Warhammer 40,000: Dawn of War 2. 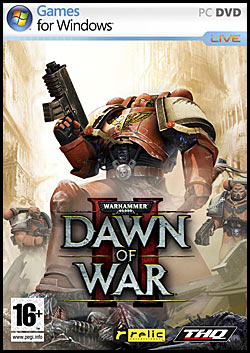 Developed by award winning Relic Entertainment, Dawn of War II ushers in a new chapter in the acclaimed Real-Time Strategy series - taking players to the brutal frontlines of war to lead an elite strike force on a mission to save the galaxy.

It is the 41st Millennium in Sub-Sector Aurelia - a cluster of worlds on the edge of the Galaxy - and a battle of epic proportions is about to begin. Ancient races will clash across the planets that dot this section of space, battling for the greatest of stakes - not only the claim to the land and its bounty - but the fate of each race.

With a focus on fast-action RTS gameplay, Dawn of War II brings to life the science fiction universe of Warhammer 40,000 like never before. Experience the intimate brutality of battle as you play through the epic campaign. Clash with enemies on battlefields ablaze with visceral hand-to-hand and ranged combat. Lead and develop your squads into the most battle hardened elite strike force in the Galaxy.

- Simplified Entry Point - Whether you're new to the genre or a seasoned veteran, Dawn of War II gets you into the action quickly and easily. Learn the game at your own pace and get ready to save the galaxy.
- Brutal Frontline Action and Tactics - Get straight into the action and experience intense hand-to-hand and devastating ranged combat. Use vicious close-combat to obliterate your enemies. Outsmart your opponents - using dynamic and destructible environments to suppress, flank and destroy your foes.
- Epic Single Player Campaign - Command an elite strike force, developing the skills and abilities of your squads and commander as you progress through the game.
- Co-Op Multiplayer - Play through the entire single player campaign co-operatively with a friend, at any point in the game, anytime.
- Persistent Long-Term Goals - Customize your Space Marines with persistent leveling and unlockable special abilities. Equip them with the hundreds of unique weapons and items you earn through mission rewards and battlefield drops.
- Next Generation RTS Engine - Utilizing Relic's proprietary Essence Engine 2.0 to deliver cinematic visuals, detailed graphics and special effects.

The Curse of Abundance  is the Warhammer Franchise in Trouble?

Games Workshop is giving away the rights to electronic adaptations of their flagship brands to anyone who'll take them. Theoretically speaking, every fan of Warhammer should be over the moon about this...